The Millennials, Apparently, Have Changed The Definition Of "Unanimous" -- January 18, 2018

I have read and re-read the headline and the story over at Fox.com and cannot figure out what I'm missing. Either I'm missing something very, very obvious, or the millennials have changed the definition of "unanimous."

Sort of reminds me of what the definition of "is," is. LOL. 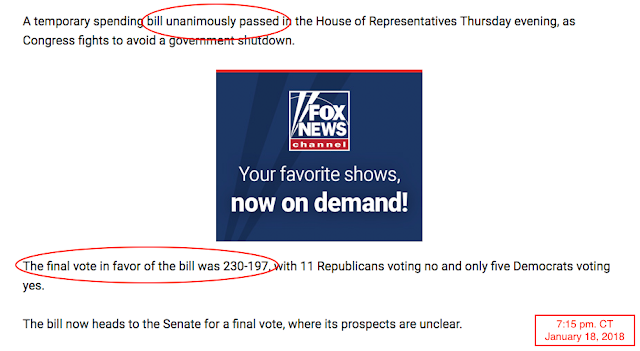 On another note, my biggest fear following the 2018 mid-term elections when the Republicans lose control of the House and the Senate is that we will go back to having no adult leadership in Congress. No matter where one stands with regard to the two parties, it sure seems like we have more adult leadership in Congress now than we did in 2009, but I've long forgotten the political timeline.

Diane Feinstein seems to be truly conflicted on this whole thing; in her heart, I think, she knows the right thing to do, but peer pressure is another thing. My hunch is she will compromise, taking ten crucial Democratic votes with her -- the compromise will be to shut down the government over the weekend when it doesn't matter; hope the stock market crashes Monday, and the polling scares the GOP, but regardless of what happens Monday, will vote to extend temporary funding by the end of the week.

The interesting thing is that, except for Yogi Bear and a few park rangers, not one American will even notice. (Federal workers that don't show up for worker will just assume it's a paid vacation [history tells us that in these situations, all Federal workers will get backpay)].

If the shutdown lasts longer than Monday, the mainstream media will be going nuts but the rest of America will go on as usual, except, of course, those who had planned to visit Yellowstone Park.

This would be payback for the 16-day government shutdown under President Obama.

Davos: January 23 - 26, 2018. Trump will be in Davos during the shutdown -- exactly perfect for those wanting to embarrass Trump. The Senate may simply say they will re-address the funding issue when the president gets back form Davos. President Trump will address the body on the last day, I believe, January 26.

It should be an interesting week on CNBC next week.

From The Daily Star,


New York-London passenger flight goes ‘SUPERSONIC’ in record-breaking trip A PASSENGER plane has set a new world record for the fastest ever transatlantic flight after going “supersonic”. this screenshot:

The dizzying speeds of Concorde made a shock comeback on Monday when a Norwegian flight topped the speed of sound.

It zoomed from New York to London at a mind-blowing 776 mph and took just five hours and 13 minutes – almost a whole hour quicker.

And after touching down at Gatwick and shaving 53 minutes off the flight duration, the pilot then revealed: “We could have flown faster.”

Captain van Dam said: “We were actually in the air for just over five hours and if it had not been for forecasted turbulence at lower altitude, we could have flown even faster.”

Then this, captured in a screenshot:

In California we have a "bullet train" in the planning stages; in Britain, they already have a trans-Atlantic "supersonic train."

I can't make this stuff up.
Posted by Bruce Oksol at 7:42 PM No comments:

Random Update Of An XTO Lawlar Well With A Small Bump In Production -- January 18, 2018

So, Oasis drills/fracks a well, and at least one XTO well shows some benefit, albeit not much. 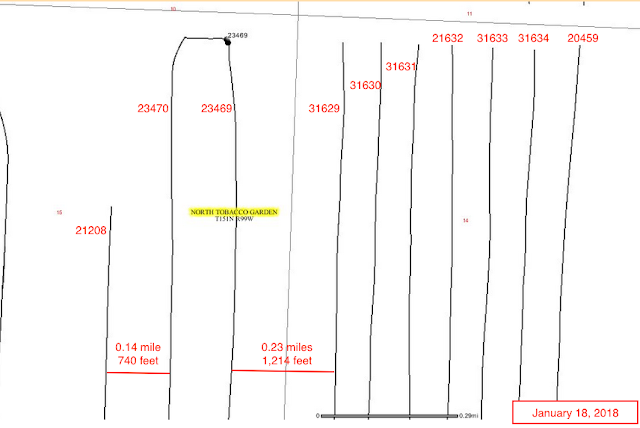 Posted by Bruce Oksol at 3:18 PM No comments:

And this was written with a bias and an agenda.

Meanwhile, for me today was a buying opportunity when the market took a breather and actually dropped back a bit. Thank you Ms Pelosi and Mr Schumer.

There are two issues here, whether the government shutdown is due to:
If it's the latter -- reaching the debt ceiling -- yes, entitlements could be cut completely or decreased. The US Secretary of Treasury would call the shots, I assume. My hunch is that a lot of money would be shifted from other agencies and/or programs to cover military, retired military, and social security payments. But yes, if it's a "debt ceiling" issue and this issue lasts for a protracted period of time -- perhaps two pay cycles -- then there might be cut in federal pay and benefits, but my hunch is that Congressional pay would have to be cut first if any incumbent hoped to remain in office.
Posted by Bruce Oksol at 2:33 PM No comments:

Europe running scared. This is a huge story and will be seen by few, over at Bloomberg.
France wants joint banking-union proposals with Germany in March. Why now? One reason: the Trump tax bill. Do you need proof?


[Germany's acting finance minister] praised the French government’s efforts to cut its budget deficit and reform its economy. The acting German finance minister also said that Europe had to react to U.S. plans to overhaul its tax system, noting that companies are likely to undertake a massive shift in funds from abroad as a result.

Gee, do you think that the lower US corporate tax rate had any effect on this?

The fourth-quarter forecast of real consumer spending growth increased from 3.8 percent to 4.0 percent after Wednesday's industrial production release from the Federal Reserve Board of Governors.

Best business optic: when Rick Santelli schools Steve Liesman on CNBC. And it happens every, every day. Steve Liesman still can't give any credit to Trump. He's become a parody of himself. Steve still argues that repatriation is not guaranteed. While he's babbling about that, CNBC cuts to Rick Santelli, who says, "They should have asked Steve about 'inversions." Since Trump has come in as president, "no one is talking about inversions."

If Steve is investing in line with his political views, he has missed one of the biggest bull markets in US history.
Posted by Bruce Oksol at 12:09 PM No comments:

We were told by Patrick Kennedy that our grandchildren would never see snow by 2010 or some such year. Don reminded me of that. Today, it is being reported that there is snow in all 50 states. 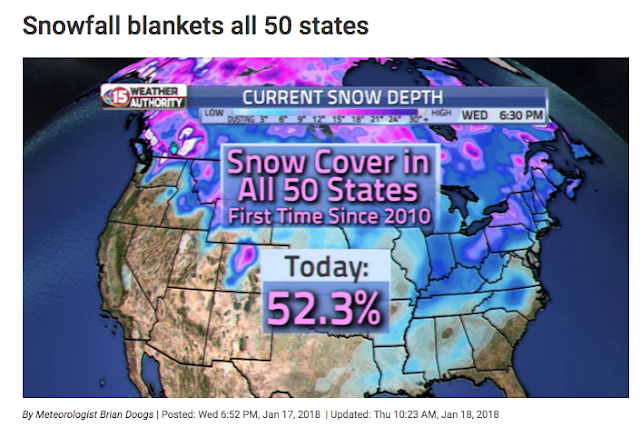 
Texas has set a new record for winter power demand in the wake of a record-breaking cold snap that gripped the state on Tuesday night, according to the Electric Reliability Council of Texas, which oversees 90 percent of the state's grid.
Power demand peaked between 7 a.m. and 8 a.m. Wednesday at 65,731 megawatts -- shattering the record of 62,855 megawatts hit earlier this month when another cold snap hit the state. In a news release, ERCOT said the state had sufficient power resources available to meet demand.
The spike in demand also affected wholesale power prices, which hit around $200 per megawatt hour across the state, according to ERCOT. The average wholesale price of power, which changes by the minute every day, is typically $25 per megawatt-hour. By 9:30 a.m., prices had dropped down to around $100 per megawatt-hour, except in South Texas.

Don't cry for Texas at $200/MWh. Those in New England are paying $500/MWh, and those in South Australia are paying $10,000/MWh (no typo). [Update: this was how bad it was last week in South Australia -- in two days they burned more money on electricity costs than it would have cost to build a new natural-gas fired plant.]

Our electricity bill here in the DFW area in December, 2017, was about 4X our normal monthly payment. 4x. 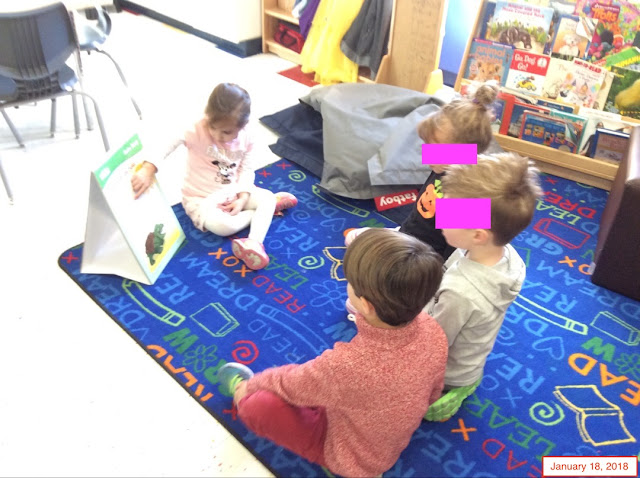 Gasoline demand is at this site; at the link, scroll to the bottom of the page. Gasoline demand continues to fall (as expected this time of the year) but remains ahead of the same period last year.

Five years ago, or thereabouts, "we" were building LNG import terminals; now we are exporting natural gas. This is the story that is not being told: our energy balance of payments would be setting new records buying natural gas from the Mideast. Our "energy balance of trade" is allowing the Federal government to spend money elsewhere, much on social services. Those folks complaining about frackers and fracking should be sending the oil industry "thank you" letters -- like that will ever happen. LOL. And those frackers did that fighting regulations, politicos, and protestors all along the way. They're still fighting natural gas pipelines in New England. We'll never know who "lucky" we were. We certainly won't read about this story in the mainstream media.

Before we get to the US crude oil inventories, let's look at the US natural gas draw, from John Kemp via Twitter. The current stocks are almost at historical lows -- not quite there but .... 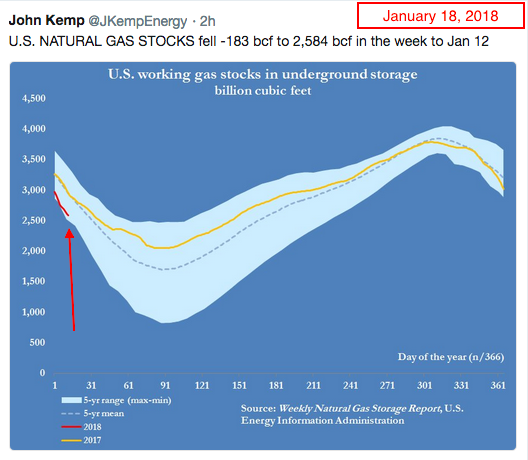 Chart as depicted by EIA: 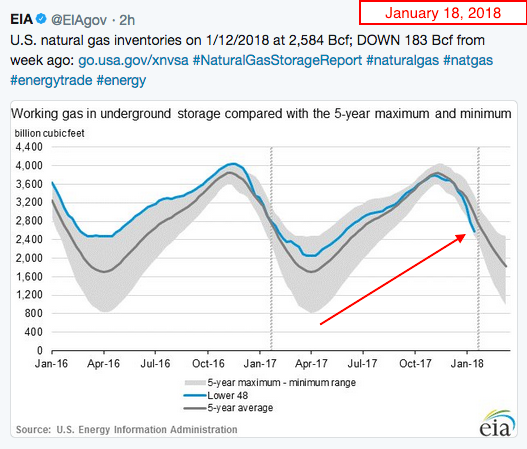 Now, back to the US crude oil inventories.

I'm being told that the 7-million-bbl draw is:
ZeroHedge has the data - it's a great read with great graphics.

The market's reaction: ho-hum. WTI at $63.94, down 3 cents. Yes, after the report, WTI declined slightly. The phrase that CNBC will use: the price of WTI has already baked in the weekly drawdown.

The weekly petroleum report is here. The data points:
Re-balancing is now down to 20 weeks, around mid-2018:

We haven't talked about this in a long time: weekly US days of crude oil. Right now it's about 24 days; I put the over/under line at 20 days. If we drop below 20 days, it will be something we haven't really seen since before the Saudi surge, back in 2014. If we stay at / above 24 days, one would think the price of crude oil would not trend higher.
Posted by Bruce Oksol at 10:32 AM No comments: