The Winner Of The 2017 Geico Rock Award

An earlier post reminded me I had not announced the winner of the Geico Rock Award for 2017.

The list of nominees for 2017 is at this post. I cannot guarantee that all nominees were actually posted at that site, but ...


January 3, 2017: That didn't take long, our first nominee for the 2017 Geico Rock Award. Prince Harry: "Saving endangered animals is God's test for humanity." I guess he missed the Aleppo [Syria/ISIS] story, the 2016 equivalent of the 1940s Holocaust.

With Regard To Bragging Rights Among Oil Producers, Has CNN Been Under The Geico Rock For The Past Four Years? Nope -- January 3, 2018

From CNN: American could be crowned the oil world's new king in 2018.


The United States is poised to ramp up crude oil production by 10% in 2018 to about 11 million barrels per day, according to research firm Rystad Energy.

The U.S. hasn't been the global leader, nor ahead of both Russia and Saudi Arabia, since 1975.

"The market has completely changed due to the U.S. shale machine," said Nadia Martin Wiggen, Rystad's vice president of markets.

Has CNN been under the Geico Rock for the past four years? I don't think so. CNN is correct on a technicality. But it's close. The headline in the next story is slightly "off."


According to the International Energy Agency (IEA) and the Bank of America, the United States is now the world’s largest oil and natural gas liquids producer and will remain so for awhile, overtaking both Saudi Arabia and Russia.

U.S. production of crude oil, along with liquids separated from natural gas, surpassed all other countries with daily output exceeding 11 million barrels during the first 5 months of this year.

According to the Energy Information Administration (EIA), those two states produced almost 50 percent of the nation’s oil in April 2014.

Now, it is also the largest producer of oil and natural gas liquids.

Posted by Bruce Oksol at 9:06 PM No comments: 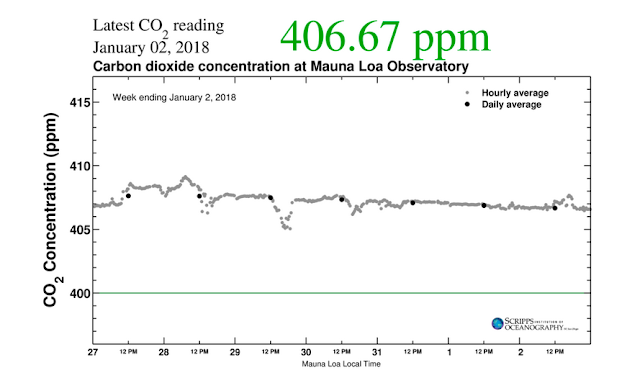 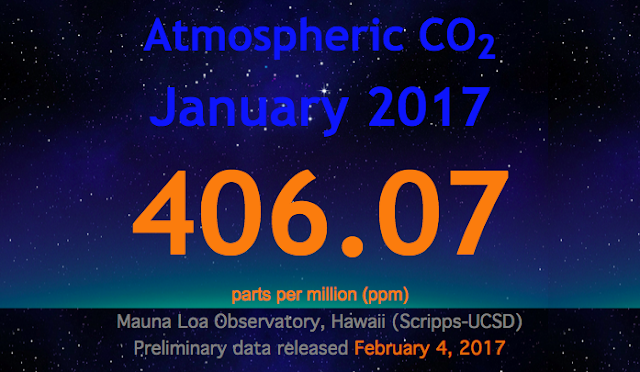 I'm not going to explain how I got to this one, but a reader sent me this little bit of trivia:

"Jerry," as he prefers to be called outside the courtroom, is a native of Noonan and a University of North Dakota graduate. He was appointed to the Supreme Court on Aug. 15, 1978, by former Gov. Arthur Link. He's been elected three times and selected chief justice by his colleagues four times since 1993.

Thirty-nine years is not excessive. Most 30-year-career military men who are forced to retire after 30 years of service are but 54 years of age and at the peak of their professional productivity. Can one imagine if Warren Buffett had been forced into retirement at age 54? Or Donald Trump? Or Ronald Reagan?

In this case, I assume, VandeWalle succeeded Ralph J. Erickstad. I served alongside his son, John Erickstad, in the USAF back in 1980 or thereabouts, assigned to Grand Forks AFB.
Posted by Bruce Oksol at 6:40 PM No comments:

From insideevs.com:
API crude oil inventories (link here): a 4.992 million drawdown. I use EIA data to re-balance. That data will come out tomorrow.


Scana, the South Carolina utility that last year abandoned its plan to build two of the first new commercial nuclear reactors in the US for 40 years, has accepted an all-share takeover offer from Dominion Energy valued at $14.6bn including debt.

The deal, which is dependent on regulators approving Dominion’s plan to manage the remaining costs from the failed reactor project, comes after Scana was laid low by its ambitious attempt to expand its nuclear generation capacity.

Thomas Farrell, Dominion’s chief executive, said he expected South Carolina’s future increases in power demand to be met by gas-fired plants and renewable energy. [Comment: "renewable energy" is always thrown in to get support of the mainstream media, and to get support of the regulators. In reality, it will amount to very little in the big scheme of things. Natural gas is the big winner here.]


Natural gas deliveries jumped to a record on New Year’s Day in the lower 48 states, topping volumes reached four years ago during the “polar vortex,” which unleashed bone-chilling conditions across the Midwest and Northeast.

Looking For Information On Well In Northwest North Dakota -- January 3, 2018

A reader wondered why this well continues to flare all natural gas. It was first drilled/stimulated/producing in late 2011. There was a small jump in production (3x production) this past summer but there is nothing in the file report to explain why. FracFocus shows no re-frac but does note the 2011 frack (which is pretty good -- I don't usually find frack reports prior to 2012 in FracFocus. I don't think work-over rigs are generally noted in the file report.

There is a form in the file report that this well meets stripper well status, dated December 27, 2016.

Some readers would be interested if anyone has more information on this well:
The well:

Scott Adams: great, great column, putting things into perspective. The list:
The possible he gets done quickly; the impossible takes a little longer.

This is huge. On so many levels.
Posted by Bruce Oksol at 1:10 PM No comments:


The GDPNow model forecast for real GDP growth (seasonally adjusted annual rate) in the fourth quarter of 2017 is 3.2 percent on January 3, up from 2.8 percent on December 22.

The model's estimate of the dynamic factor for December—normalized to have mean 0 and standard deviation 1 and used to forecast the yet-to-be released monthly GDP source data—increased from 0.44 to 1.50 after the ISM report. The forecast of the contribution of net exports to fourth-quarter real GDP growth fell from -0.46 percentage points to -0.60 percentage points after the Census Bureau's Advance Economic Indicators release on December 28.


The fact that New England power generators are now importing fuel oil from Europe should come as no surprise as the LNG facility in Everitt, MA, gets its gas from Trinidad.

Wanna hear the craziest news of the day?

Source of the coal used in Bridgeport comes from Indonesia/Philippines from mining company Adaro who touts product as "EnviroCoal".

So, we have the Marcellus nearby, huge coal sources in Pennsylvania, US exporting LNG worldwide, and the New England policy makers have brought about a situation where their residents need to bring in fuel from Asia, the Caribbean, and now Europe to stay warm and keep the lights on for their families.

If this does not spur the wider population up there to become enraged and forcefully engage in this process which is - quite literally - destroying lives, then shame on them.

This story is shaping up to be the big story for the week. From twitter this morning, rare tankers of heating oil from Europe headed to the land of banned fracking and no pipelines: 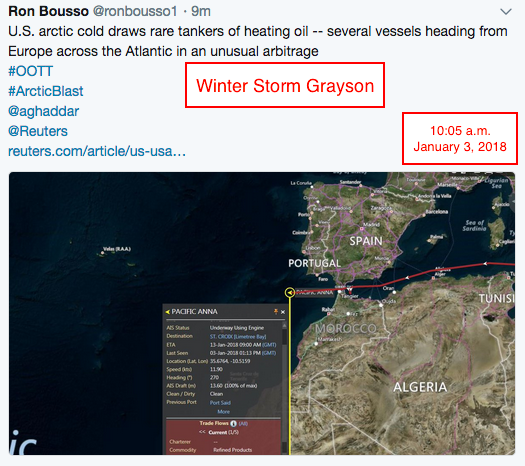 Epic storm: Boston's epic cold snap ties a century-old record. It hasn't been this cold since 1918.


Ice: the Great Lakes have 9x the ice coverage of last year at this time.

Strain: America's power grid is showing signs of strain during brutal cold -- Bloomberg. Gee, I wonder how that happened? Area of greatest concern is also where majority of CAVE dwellers seem to live.

Lost decades coming to an end. US economy, another record, making American great again: manufacturing in US accelerates to cap best year since 2004 -- Bloomberg. President Trump is not mentioned in the article. That's why he needs to tweet. The mainstream media certainly isn't going to mention his economic policies actually might be working. Tags: lost decade; and, second lost decade.


The U.S. auto industry's historic growth streak may be ending, but demand for new cars and trucks remains healthy as the new year begins.

U.S. sales of new vehicles are expected to fall 2 percent to 17.1 million in 2017, according to Kelley Blue Book. That would be the first year-over-year decline since 2009, ending an unprecedented seven-year expansion.

General Motors and Ford both reported a 1 percent decline in sales last year compared with 2016. Automakers are releasing monthly and annual sales numbers Wednesday.
While sales are likely to fall short of 2016's record of 17.55 million, 2017 is still expected to be the fourth-best sales year in U.S. history. Low unemployment and rising consumer confidence are expected to boost demand this year.

Auto sales -- it's all about the mix, not the absolute numbers. Financial Times reports that "vehicle sales in 2017 shaped up to be the worst year for the US auto industry since the financial crisis. But, as noted above, 2017 might be the fourth-best sales year in US history. But total sales mean less than what is selling.

Ford, from their press release:

Global warming: apparently the current winter storm will be at its worse starting at midnight tonight on the east coast. Thursday (tomorrow) will be bad, but Friday and Saturday will be horrendous -- and it's possible that there may be power outages -- reporting by CNBC. It will be interesting to follow ISO New England. Wind farms will shut down during the high winds.

All eyes on North Korea. But it looks like Iran is imploding. 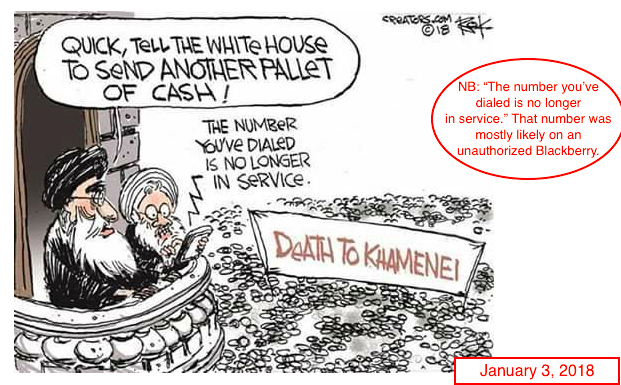 
RBN Energy:  Haynesville natural gas production is surging -- again -- but will it last?

Venezuela: misses another debt payment. The country has $9 billion payments due in 2018.

Venezuela: has run out of gasoline.

US banks: business-loan growth fell off a cliff in 2017 and no one can figure out why. This has been noted before. Now The WSJ has the story.

Coincidence? I think not: the S&P 500 has risen for 14 months straight, a new record. Let's see, how many months ago was Donald Trump elected president? November, December, January, February ... hmmmm. 14 months. And "they" call it "synchronized global growth." LOL.

Looking closely at the charts, it would appear only the 150 Mw is producing (Schiller plant, NH), or one of the others at reduced capacity (unlikely).

Speculation, but the Bridgeport plant in Connecticut (400 Mw), almost 50 years old and slated to retire, ran out of coal or broke down.

Wouldn't surprise me at all if they either ran out of coal or had operational issues, aka breakdowns.

When these older plants are seldom used and due to be retired (the 2 NH plants were recently sold) maintaining tip top condition is difficult.

This is something I had not seen before -- it's likely it's happened before but I simply missed it. Note in the graphic below that coal dropped abruptly and precipitously just as demand and price of electricity was at early morning highs.

When something drops that precipitously and abruptly, there must be an explanation.

Also, which we've seen every morning, even as electricity demand is going up, renewable energy is actually dropping.

Oil is the go-to source for generating electricity in New England when it absolutely, positively needs it. 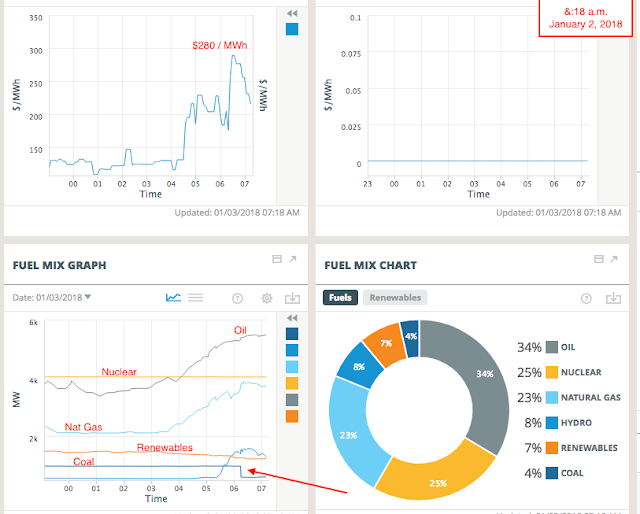 Update: At 8:07 a.m. electricity demand started going back up. Renewable continued to trend down; coal did not move at all, nor did natural gas. The only energy source that increased was oil.
Posted by Bruce Oksol at 7:29 AM No comments: