France: this is the question troubling me today. Did President Macron say:
Regardless, this was Pelosi's response: miettes de pain. Pronunciation here.

The wall: political theater. The president wants $5 billion. Congress will give him $1.6 billion. He's willing to veto any new spending bills unless he gets the $5 billion.

Migrants: just blew their story. Claiming "political asylum" they caravan migrants now say they will leave the caravan and return to their home countries if they each get $50,000 from the US. They will use the $50,000, they say, to start their own businesses in their home country. They say that's a small amount considering all the money US citizens stole from Honduras. No link. Story easily found.

Apple phone sales in trouble. I don't think I've ever seen this before. Going into Christmas season Apple has slashed prices. I think these are the $1,000-phones. They are now being advertised for $499 on the Apple site. 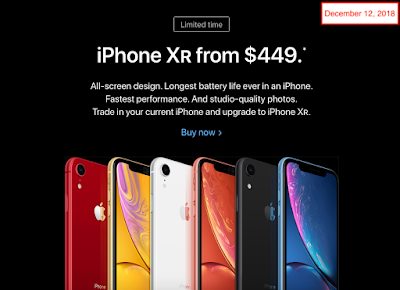 Wayfair. Apparently this is a big story in Boston. Wayfair is a huge e-commerce company headquartered in Boston. The company is getting yet another tax break from the state for agreeing to increase the number of jobs in the state. Meanwhile, over at social media sites, I continue to see the trope that the shale industry is going broke, that it cannot make money on $50-oil. In fact, many (most?) shale operators are doing just fine. Some went away, some reorganized after the Saudi Surge (2014 - 2016) but are now better prepared for the current turbulence. Many are paying dividends. Wayfair: in business since 2002, and has not yet turned a profit.

Disclaimer: this is not an investment site. Do not make any investment, financial, job, travel, or relationship decisions based on what you read here or what you think you may have read here.
Posted by Bruce Oksol at 6:23 AM