From ISO California (of course, no cost projections when demand spikes, exceeding capacity): 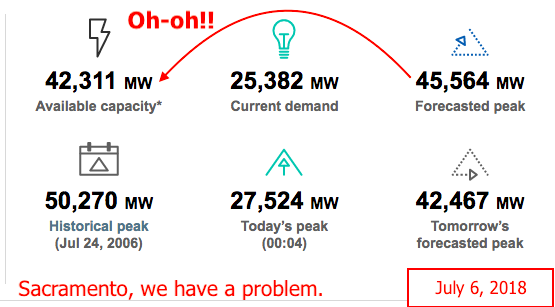 Hopefully, the sun and the wind will kick in this afternoon when demand will peak.

Californians screaming! Hey, just like a roller coaster when it comes to renewable, non-dispatchable energy, an unpredictable ride.

From Rizone.  Tesla does not report "green data" unlike other companies --


Engaged Tracking asserts that Tesla, Inc. – in contrast to “older, ‘dirtier’ counterparts in the automobile industry” – neither reports its greenhouse gas emissions nor cites climate change as a “current business issue” when reporting business information. Moreover, based on “emissions intensity” (how much carbon a company emits per dollar of revenue earned), Engaged Tracking contends:
Engaged Tracking is not alone in highlighting problems with Tesla, Inc. and its products.

For instance, as this March 2016 report from Devonshire Research Group, LLC points out, producing Teslas – and other EVs – is not necessarily a net win from an environmental standpoint.

Citing research from Morgan Stanley, a 2017 article on MarketWatch.com articulates a similar sentiment.

We talked about this years ago; nothing has changed. Unless it's gotten worse?
Posted by Bruce Oksol at 8:22 AM