Later, 2:20 p.m. Central Time: see first comment. The article below refers to KML.TO (a subsidiary/affiliate of Kinder Morgan). I missed that. An eagle-eyed reader caught it. I have removed the previous screenshot and replaced it with a new screenshot. 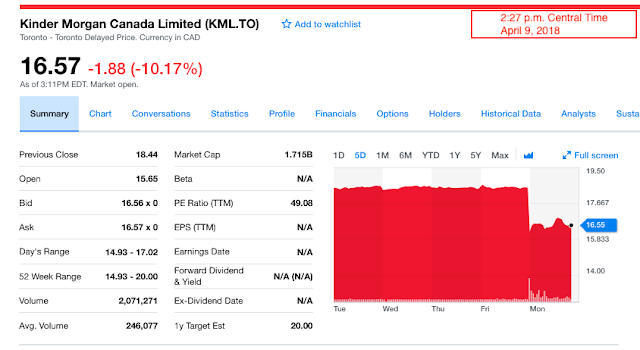 To the winner, go the spoils. From the AP via The Bismarck Tribune --


Forget about bike-share stations in Chicago or pedestrian walkways in Oakland. That's so Obama-era.

In the Trump administration, a popular $500 million transportation grant program is focused more on projects in rural areas that turned out for Donald Trump in the 2016 election.

That means more road and rail projects in GOP strongholds such as Idaho, North Dakota, and Oklahoma, and fewer "greenways," ''complete streets" and bike lanes.

The latest round of these grants has nothing for New York City, Los Angeles or Chicago. Money in those Democratic heavy states went instead to projects in Trump-friendly regions: repainting a bridge in New York's North Country, contributing to a highway project in Modesto, California, and upgrading an interstate highway in southern Illinois.

One would think with research and sales, Planned Parenthood would be self-supporting.

At least we know the federal government's priorities.

For those who think China can play the "US-Treasury" card, think again.
Posted by Bruce Oksol at 8:32 AM