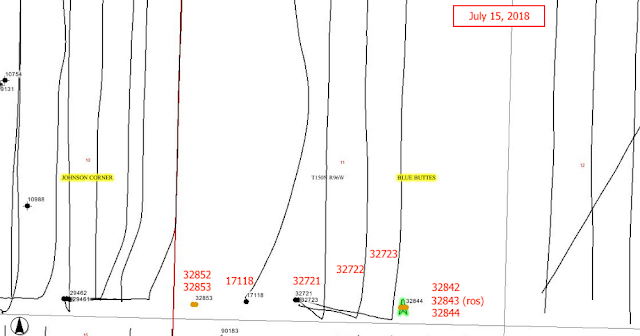 Again, here's another Bakken well with huge jump in production, and according to FracFocus, no evidence that it was re-fracked.

And yes, the neighboring well was fracked at the time the index well had a jump in production:
The graphic: 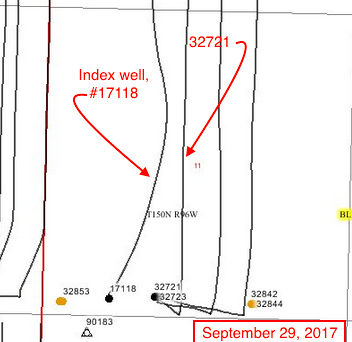 Posted by Bruce Oksol at 10:54 PM No comments: Links to this post

US petroleum demand was the highest for any August since 2007. US crude oil inventories decreased slightly but re-balancing will still take 46 weeks at the current rate of drawdown.

The Permian pretty much stops all that talk about peak oil.

Harold Hamm opines that the EIA is mis-forecasting US crude oil production growth for next year; WTI climbs to $52 before dropping back to $51 and change.

Operations
Oasis reports a number of nice Forland wells
Another random example of a peculiar phenomenon in the Bakken
Marathon reports a re-frack, a Larry Repp well
Random look at an NP Resources well in southwestern North Dakota
Petro-Hunt has another big well in Charlson oil field

Pipelines
Dakota Access LLC (DAPL) donates $15 million to state of North Dakota to help pay for law enforcement during the Standing Rock pipeline protests; speaking of which the Standing Rock tribal chief was voted out of office
MDU to supply Bobcat plant (Gwinner, ND) with natural gas via new pipeline

Bakken 101
Bakken crude oil: lightest and sweetest of them all 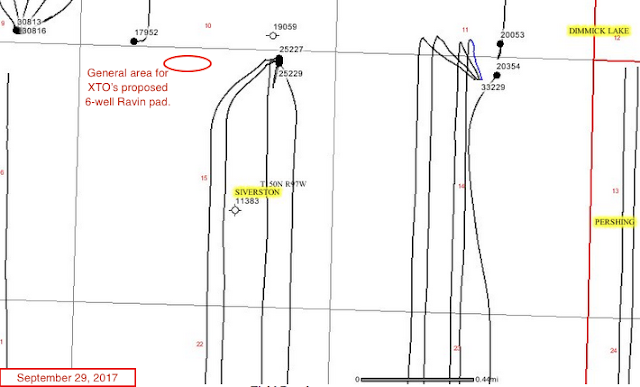 Posted by Bruce Oksol at 6:23 PM No comments: Links to this post

From the Williston Wire.

High tax state. Few people know this: in the oil industry, North Dakota is seen as a high-tax state on oil production. From The Bismarck Tribune:


North Dakota's governor wants the state to produce 2 million barrels a day, but lower taxes on oil and better access to markets in the South mean the competition for drillers is tight, industry experts and state regulators said Tuesday, Sept. 26 in Grand Forks.

"We need, as problem-solvers, to figure out how we are going to convince capital back to the Bakken," Lynn Helms, director of the North Dakota Department of Mineral Resources.

"There are still somewhere in the neighborhood of 50,000 wells to drill (in North Dakota), and we need to attract capital back into the Bakken to improve the recovery. A lot of that is going to be selling how we do technology in North Dakota."

New post office opens in Watford City. Located north of the Watford City Airport, at 1204 4th Aveue NE. The new facility is more than double the size of the previous building; has nearly 3,000 postal boxes.

Too crowded to attend any more for a pleasant experience: Norsk Hostfest opens in Minot, September 27 - 30, 2017. I could be wrong, and I probably am, but years ago, I thought the Hostfest lasted nearly two weeks. It's hard to believe that the festival is only four days. I remember my dad buying tickets for the Hostfest for his sibs and we would all spend several days in a local motel for a family reunion. At that time, it was often too crowded to really enjoy, and I can only imagine how crowded it must be now, but, again, I may be wrong.

WSJ headline: Pennsylvania company to pay record fine for illegally hiring immigrants. Asplundh Tree Expert pleads guilty for employing those who didn’t have authorization to work in the U.S.

This company is "all over" Texas. I guess tree pruning just got a lot more expensive here in the DFW area.


A Pennsylvania-based tree-trimming company was ordered to pay $95 million in the largest fine against a company for hiring thousands of immigrants who didn’t have permission to work in the U.S., according to federal officials.

Asplundh Tree Expert of Willow Grove, Pa., pleaded guilty in federal court in Philadelphia on Thursday to illegally hiring the immigrants. Some of the immigrants were in the U.S. illegally, none had authorization to work in the country, according to court documents.

A federal judge ordered the family-owned company to pay $80 million and adhere to an Administrative Compliance Agreement from U.S. Immigration and Customs Enforcement, or ICE. The details of the agreement weren’t made public.

Something tells me Asplundh is not the only company guilt of such things.
Posted by Bruce Oksol at 11:33 AM No comments: Links to this post

All aboard! Full steam ahead on UNP dividends -- Morningstar.

Starbucks is changing coffee-purchasing habits: WSJ link. Starbucks is no longer on my daily (or even weekly) things to do. I go to Starbucks when it's about the only option I have (for what I need to get done). I last visited our local Starbucks while waiting for our minivan to have new brakes installed and I noted that things had improved with regard to mobile ordering. From the linked article:


When it comes to mobile payments Starbucks has succeeded where Silicon Valley has generally struggled. But the coffee giant’s advance-ordering process via smartphones hasn’t always run smoothly. Earlier this year, the company admitted that it was getting so many advance orders that the whole process was hurting the in-store experience for those who wanted to wait on line and buy their drinks the old-fashioned way.


Minnesota utility regulators are studying a proposal by Xcel Energy to close two biomass plants that could mark a turning point for the industry here, particularly as prices for renewable energy drop.

The proposal — which has approval by the state legislature and the communities affected — would close Benson Power, which burns turkey waste and wood, as well as a biomass plant in northern Minnesota owned by the Laurentian Energy Authority (LEA).

Closing the two plants, which make up half of Minnesota’s biomass generation, could cost hundreds of jobs, and state forest management officials and the poultry industry say it will create turmoil among various suppliers to the plants. Their message is simple: slow down.

Xcel has contended the contracts — which in both cases would have lasted roughly another decade — cost too much, especially in light of low wind energy prices. Xcel spokesperson Randy Fordice said in a statement that the “energy generated from these facilities is the most expensive energy on our system and is more expensive than other cleaner renewable sources.”

New wind energy costs Xcel an average of $15 to $25 per megawatt hour (MWh), while biomass is around $150 MWh. All other sources of generation — nuclear, solar, natural gas and coal — are also less expensive than biomass.

Reminder: Europe loves biomass. Europe is paying for wood chips being shipped from southeastern US to the continent. Imagine the additional cost incurred in transporting sawdust.
Posted by Bruce Oksol at 10:29 AM No comments: Links to this post

Posted by Bruce Oksol at 9:57 AM No comments: Links to this post

A Peculiar Phenomenon Of The Bakken -- Take A Bakken Well Off-Lline For A Few Months And Watch Production Surge When Brought Back On Line -- September 29, 2017

Well #1 and well #2 are adjacent horizontals. Well #1 is a new well among many new wells from the same pads running south to north; well #2 is an older well that runs north to south; it was not re-fracked, but even so production has surged.

Well #2 well has not been re-fracked based on data at FracFocus.

Production of well #2, not re-fracked, based on data at FracFocus, recent production (full production data is posted here): 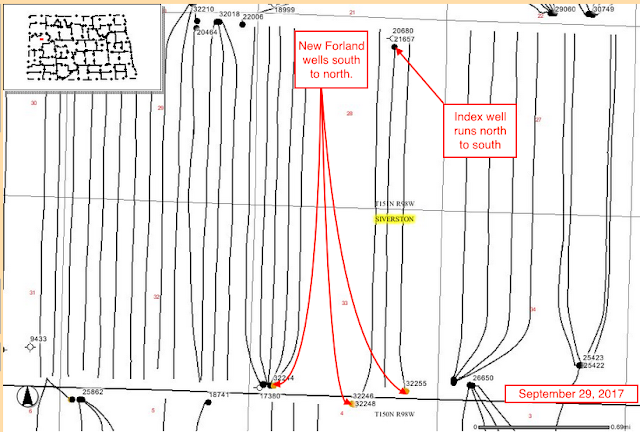 From the archives: at this post, if you scroll down, there was a very, very interesting study back in 2009 -- "Simultaneous Hydraulic Fracking Treatments In Adjacent Horizontal Wells."

Years ago, I posted the likelihood that operators would run horizontals in opposite directions once in-fill wells started to be drilled. I won't be able to find it, but if I run across it, I will post the link.
Posted by Bruce Oksol at 9:42 AM No comments: Links to this post


The story only interests me because:


Dutch gas production has been steadily declining, partly due to a lack of new developments and partly to a government-mandated cap on output from the country's largest field at Groningen after it was established that it triggered earth tremors.

Posted by Bruce Oksol at 6:46 AM No comments: Links to this post