A nice MRO well is off-line suggesting some activity in the neighboring area. See this post.

The Williston Herald, data points:
From an earlier post:


The scholarship money is coming from the Alva J Field Trust, WSC Foundation and the N.D. Higher Ed Challenge Fund, which was made to stimulate the spirit of philanthropy for North Dakota's colleges and universities. The fund allows for every $2 in eligible private donations to be matched with $1 of state funding.

Posted by Bruce Oksol at 7:58 PM No comments: Links to this post


The GDPNow model forecast for real GDP growth (seasonally adjusted annual rate) in the third quarter of 2017 is 2.2 percent on September 19, unchanged from September 15.

The forecast of the contribution of net exports to third-quarter real GDP growth declined from -0.11 percentage points to -0.16 percentage points after this morning's Import/Export Price Indexes release from the U.S. Bureau of Labor Statistics.

Posted by Bruce Oksol at 7:11 PM No comments: Links to this post

Posted by Bruce Oksol at 5:56 PM No comments: Links to this post


The Valero Energy petroleum company says it is giving up plans to acquire the last independently owned petroleum terminal in the San Francisco Bay Area.

Valero said in a statement Monday that it is dropping its purchase of the Martinez petroleum terminal hub rather than wage a long court battle over it.

California Attorney General had sued to block the transaction ... said Valero's purchase of the Plains All American Pipeline facility would have put all three Northern California petroleum-shipping hubs in the hands of refineries.

He says that would have stifled competition and might have raised gas prices.

Making America great: from that alt-right site, food stamp usage has fallen every month of the Trump presidency.

A colder, earlier winter -- Farmer's Almanac. Montana/Wyoming weren't the only states to see early now. Now, pretty much unprecedented, Oregon got its first bit of snow on the last day of summer:

Meteorologists say this type of weather is unusual this time of year.

Usually the lodge sees sticking snows in October, not before the first day of fall.
The snow begins about halfway up Timberline Road and it quickly turns to thick, slippery conditions a couple miles from the lodge.

Massive Arctic ice gain over the past five years despite atmospheric CO2 rising. From the deplorables, Arctic sea ice extent is up 40% from this date five years ago. From the map at the site, it appears the "northwest passage" is blocked once again.

The Flat Earth Society Meeting Is Now In Session
Based on a new study, it appears he DOES have time. What a doofus.


Agenda for the meeting: Climate change not as threatening to planet as previously thought, new research suggests -- The [London] Telegraph.

Climate change poses less of an immediate threat to the planet than previously thought because scientists got their modelling wrong.

New research by British scientists reveals the world is being polluted and warming up less quickly than 10-year-old forecasts predicted, giving countries more time to get a grip on their carbon output.

An unexpected “revolution” in affordable renewable energy has also contributed to the more positive outlook. Experts now say there is a two-in-three chance of keeping global temperatures within 1.5 degrees above pre-industrial levels, the ultimate goal of the 2015 Paris Agreement.

A "thank you" to a reader for sending me the idea for this post. The premise is still wrong -- that climate change is man-made -- but at least we have been given more hope that all is not lost.

I started Dracula (again) last night -- I've never gotten more than just a few pages in. It's such an incredibly well-written book, I tend to linger and re-read passages.

I will also read a short monograph Twentieth Century Interpretation of Wuthering Heights, edited by Thomas A Vogler, c. 1968.

Arriving from Amazon today will be two books on Casanova and Venice, having ordered them after taking in the Casanova exhibit at the Kimbell Art Museum last week.

From Dracula, new words:
Will be continued elsewhere.
Posted by Bruce Oksol at 9:29 AM No comments: Links to this post

Bye-bye? Nope, buy-buy. CNBC contributor had it exactly right today -- whether GOP repeals ObamaCare or whether it doesn't, investing in US health care companies is a no-brainer. Bottom line for him regarding health care investments: buy-buy. Buy if ObamaCare is "repealed" (wink, wink); buy if ObamaCare survives a GOP vote to repeal. I've said the same thing for months.

Disclaimer: this is not an investment site. Do not make any investment, financial, travel, job, or relationship decisions based on anything you read here or think you may have read here.
Posted by Bruce Oksol at 9:03 AM No comments: Links to this post 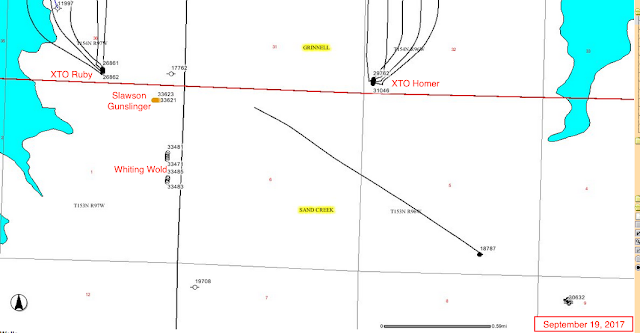 Posted by Bruce Oksol at 7:16 AM No comments: Links to this post

First, look at the breakeven price for crude oil in the Bakken: 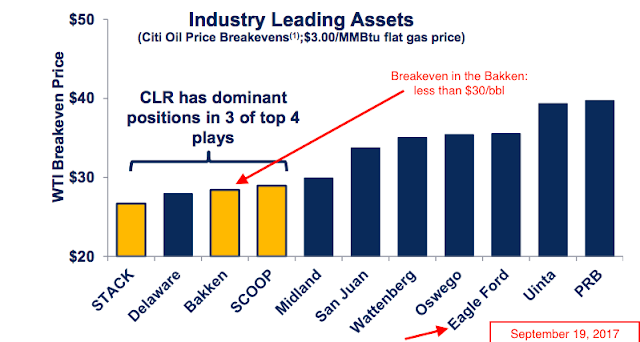 Then, look at how the DAPL affected takeaway capacity in the Bakken: 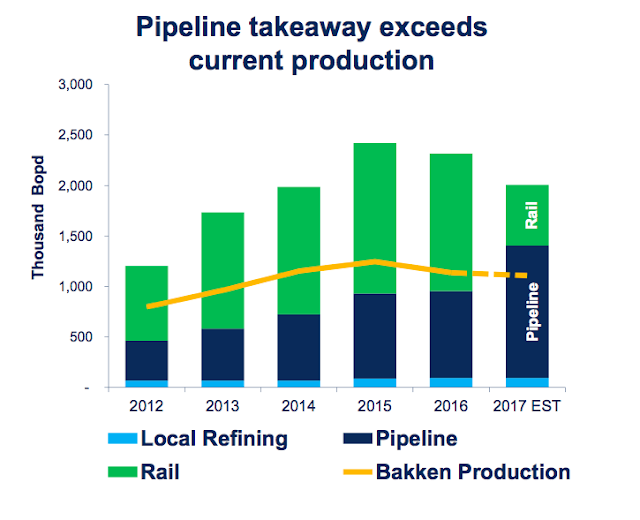 Again? It looks like the market may open at new highs in a couple of hours. In the old days, a 75-point rise in the Dow 30, as it did yesterday, would have been noteworthy. Now 75 points barely represents a third of a percent. In fact, one of my personal favorite portfolios actually dropped slightly yesterday despite the fact the market rose. It concerned me until I checked the reason why. Shares in a couple of companies had risen quickly over the past two weeks, and a bit of profit-taking explained the slight drop. The point of all this: any rise or fall in the Dow 30 of 100 points is simply a "flat day" in the big scheme of things. Having said that, 100 points in the "green" is always better than 100 points in the "red."

Toys "R" Us: files for bankruptcy. No link, story everywhere.

EVs. Why switching to fully electric cars will take time -- BBC. It looks like all that talk about EVs is code for: a) hybrids; b) hybrids; c) hybrids. I think of several reasons why the switch will "take time," starting with consumer demand. What does the BBC say?
Actually, the article was a bust. Save yourself some time; don't read it. The article simply reiterated what you already know and said it fairly poorly, considering this was BBC.
Posted by Bruce Oksol at 6:21 AM No comments: Links to this post

The art of the deal: "we" give up a dozen Confederate statues and, in return, we "get" ten national monuments in exchange.

Priorities? In 2005, the FTC blocks Blockbuster from buying Hollywood Video. Today, it is announced that Walgreens wins FTC's okay to buy 1,932 Rite Aids stores. As far as I know, Blockbuster and Hollywood Video are no longer around.

Cracking up. Hillary Clinton says she may challenge the 2016 election results. I assume the challenge will begin in California, and then skip Wisconsin, Michigan, Pennsylvania and head directly to New York. One assumes the challenge will raise a lot of money for the Foundation.

Walls. Hollywood elites have them. The Obamas have one. UC-Berkeley had one. Even the Chinese have one. It seems it's "okay" for everyone to put up protective walls except Trump. Latest example: Hungary. From one of those alt-right sites, Hungary builds a wall, cuts illegal immigration by over 99%." Over 99% is, like, almost 100%, or total control.


Hungary has slashed illegal immigration by over 99 per cent after rolling out a series of powerful border fences in response to the European migrant crisis, possibly providing a lesson as to the potential impact of constructing President Trump’s much-discussed southern wall in the U.S.

Speaking on the second anniversary of the government’s move to seal Hungary’s border with Serbia — which is also an external border for the European Union — Prime Minister Viktor Orbán’s Chief Security Advisor, György Bakondi, announced that the fences have caused illegal immigration to collapse from 391,000 in 2015, to 18,236 in 2016, to just 1,184 in 2017.

A huge "thank you" to a reader for sending me the link. The reader also noted that the #1 "open-borders" proponent is a Hungarian, George Soros.

Also this little tidbit from the same reader: four companies have been chosen to built prototypes for "Trump's wall." The four are listed at this site. One of them is Fisher Sand & Gravel Co., DBA Fisher Industries, of Tempe, Arizona. Fisher Sand & Gravel Co. of Dickinson is now wholly owned by the Fisher Industries. Fisher Sand and Gravel is one of the top 25 sand and gravel companies in the United States, with operations in Arizona, Montana, Nevada, North Dakota South Dakota, New Mexico and Wyoming.
Posted by Bruce Oksol at 6:11 AM No comments: Links to this post

How did I miss this? Worth re-posting:


Four companies have been chosen to built prototypes for "Trump's wall." The four are listed at this site. One of them is Fisher Sand & Gravel Co., DBA Fisher Industries, of Tempe, Arizona.

Fisher Sand & Gravel Co. of Dickinson is wholly owned by the Fisher Industries. Fisher Sand and Gravel is one of the top 25 sand and gravel companies in the United States, with operations in Arizona, Montana, Nevada, North Dakota South Dakota, New Mexico and Wyoming.


The fund’s sheer size has made it a challenge to find markets big enough to invest in. Meanwhile, Norway’s politicians are finding it hard to resist the temptation to raid the world’s biggest state piggy bank, with the petro-dollar addiction threatening to overheat the $400 billion economy.

Unwind: markets concerned that the Fed's unwinding could hurt the market. Perhaps Norway will soak up what the Fed unwinds.

Perspective. Some folks are wringing their hands over thousand-dollar-iPhones. Let's put that into perspective. From The Wall Street Journal earlier this week: some New York city K-12 schools cross $50,000-a-year mark. Parents are increasingly concerned that "these schools are dominated by the city's most affluent families." As I commented at the WSJ the other day regarding the price of the new iPhone X, folks have no idea how much money is out there. 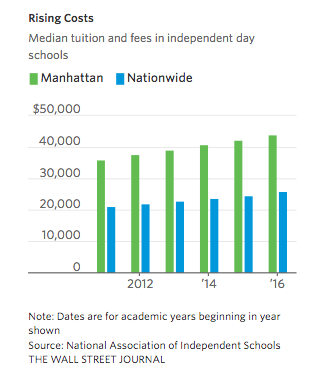 By the way, for the record, I've seen few negative comments over at Macrumors regarding the price of the new iPhone. The biggest decision folks were struggling with was whether to buy the $80 iPhone 8 Plus or the slightly more expensive iPhone X.
Posted by Bruce Oksol at 5:48 AM No comments: Links to this post