First we start with this:


Though there’s still another Nine Inch Nails EP in the works, the next thing fans will likely hear from Trent Reznor and Atticus Ross will be their latest score work. The musical partners recently lent their talents to creating the musical score for the upcoming Ken Burns and Lynn Novick documentary series The Vietnam War, which will start airing on PBS Sept. 17.

The Vietnam War will actually feature two soundtracks — one featuring Reznor and Ross’s score and the other being a more traditional soundtrack featuring a compilation of popular songs from the era that are featured in the series.

The Reznor and Ross score features over 90 minutes of new, original music available as a two-CD or three-LP set. Burns and Novick said in a joint statement, “The Vietnam War era produced some of the greatest, most impactful music ever recorded. We are grateful that so many artists from the period wanted to be part of the film and now the soundtrack. We were equally fortunate to have had the tremendous honor to work with Trent and Atticus. Their original score beautifully compliments the music from the time, and we are absolutely thrilled that our audiences will now have the chance to own the original score along with some of the best music from the film.”

See more at this link.

Gasoline Availability Continues To Improve In The DFW Area -- September 2, 2017

Wow, I love this country. Earlier I noted that the gasoline availability issue was improving here in north Texas.

So, where are "we" now, well into the Labor Day weekend when traffic is supposed to be quite heavy? Actually we are doing quite well, thank you for asking. One would have expected to have more stations reporting that they were out of fuel; in fact, it looks like we are hanging on, maybe improving.

After one of the worst natural disasters hitting the center of America's oil and gas industry, just before Labor Day weekend, and in less than 72 hours, things seem to be improving. A Drudge Report link two days ago suggested "we" would be out of gasoline by Labor Day -- I thought the same. I underestimated our blue collar workforce. I should be horsewhipped.

I can only imagine all the individuals in the Houston area who have their own personal disasters with flooding at home, and yet are somehow getting to work to keep things moving. I assume some companies are flying in personnel from outside the Houston area to help out.

Earlier today, of the nine service stations in our area, three had fuel.

Now, later tonight, six of ten service stations have fuel. I find that remarkable. A huge shout out to all the refinery workers in the Houston area, and all the truckers transporting fuel. Truly remarkable. 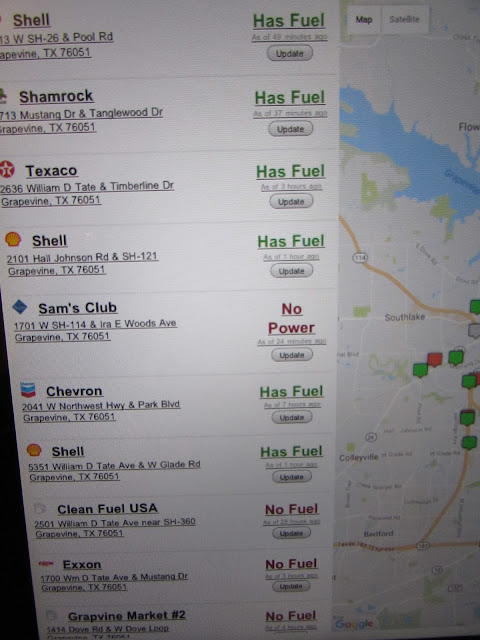 Posted by Bruce Oksol at 9:38 PM No comments:

EV sales summary for August, 2017, has been released. Data for most makes/models has (have?) been posted, but a few makes/models yet to be posted.

It's going to be close, but month-over-month (August-over-July) may show no real increase, perhaps even a slight decrease.

For July-over-June (month-over-month), 2017, there was a decline:
By make/model:
And drum roll for the Tesla Model 3:

Update on two Oasis wells: one refracked almost for certain; the other one may or may not have been refracked. See this post.
Posted by Bruce Oksol at 7:39 PM No comments: 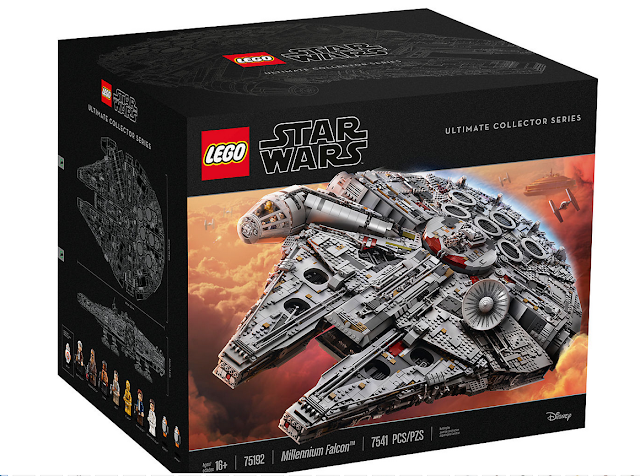 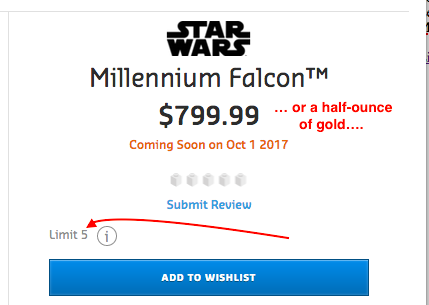 One needs a "buddy gas" app to find where gasoline is available.

This time yesterday, there was only one service station in our area with gasoline; they were asking motorists to limit their purchase to $20 (not 20 gallons, but $20). Prices had risen 40 cents/gallon overnight (from $2.39 to $2.79/gallon). The lines were five - eight cars long, about 20 minutes waiting.

Today it appears there might be three service stations open for business with gasoline available. Today, our service station has gasoline but it has raised prices another dime/gallon. But there are no limits on how much one can purchase. In addition, no lines, no waiting.

The service station in our neighborhood with gasoline is a Shell station; the XOM station across the street has been without gasoline since early Friday afternoon.

"Screenshots" from my iPad that shows the situation: 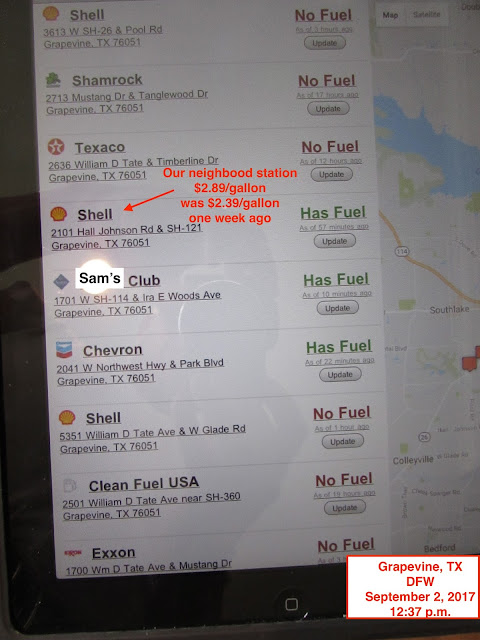 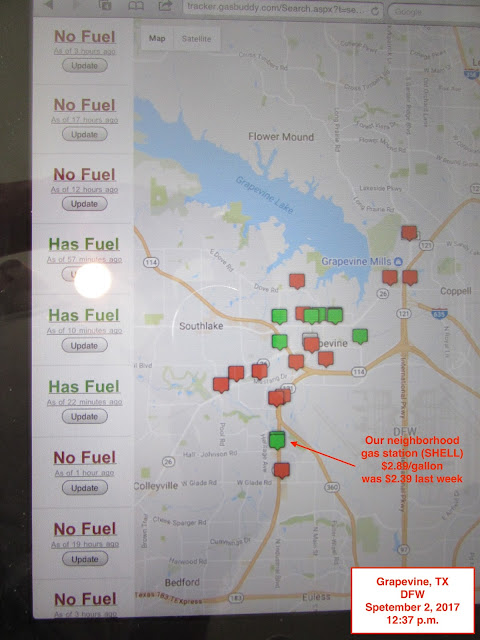 The Bleeding Has Not Stopped -- Saudi Sovereign Fund Plunges -- KSA Could Deplete Assets Within 5 Years -- September 2, 2017

And this was well before continued cuts to the US; and, Hurricane Harvey which shut down the largest refinery in the US, Motiva, owned and operated by Saudi Arabia.

In the Hurricane Harvey aftermath, WTI plunged to $46.

Last month's data (May, 2017) suggested that perhaps the bleeding had stopped for Saudi Arabia, but apparently not. Source: tradingeconomics.

Let's see what the press is reporting on this story.


Net foreign assets at Saudi Arabia's central bank, a measure of its ability to support its currency, look set to fall sharply this year as oil prices slump and Riyadh expands its sovereign wealth fund to invest abroad, according to a report by Reuters news agency.

They shrank from a record high of $737bn in August 2014 to $529bn at the end of 2016 as the government liquidated some assets to cover the huge budget deficit caused by the fall in oil prices.

This year, an austerity drive and a partial rebound in oil prices have helped Riyadh make progress in cutting the deficit - which narrowed 71 percent from a year ago to 26 billion riyals ($6.9bn) in the first quarter.

But net foreign assets have continued to shrink at about the same rate, by $36bn in the first four months of 2017 - a mystery to economists and diplomats monitoring Saudi Arabia, and a potential blow to markets' confidence in Riyadh.

"This suggests that there remains a significant deficit in the balance of payments of Saudi Arabia, which is not due to declining oil export revenues," said Khatija Haque, head of regional research at Emirates NBD, Dubai's biggest bank.


Central bank data suggests Saudi government may remain under pressure to draw reserves down to cover its budget deficit.

Saudi Arabia's foreign reserves resumed falling in July, according to data published by the country's central bank on Thursday.

The figures suggested that the government may remain under pressure to draw reserves down to cover a budget deficit caused by low oil prices.

Riyadh began liquidating the reserves in late 2014, and they dropped sharply from a record $737bn in August that year.

In June 2017, they rose month-on-month for the first time in over a year, prompting speculation that Riyadh might have cut its deficit enough to no longer need cash from the reserves.

But Thursday's data showed the central bank's net foreign assets fell by $6.3bn from June to $487bn in July, their lowest level since early 2011.

Third, zerohedge had this headline back in May 29, 2017: economists puzzled by unexpected plunge in Saudi foreign reserves.


The stabilization of oil prices in the $50-60/bbl range was meant to have one particular, material impact on Saudi finances: it was expected to stem the accelerating bleeding of Saudi Arabian reserves. However, according to the latest data from Saudi Arabia’s central bank, aka the Saudi Arabian Monetary Authority, that has not happened and net foreign assets inexplicably tumbled below $500 billion in April for the first time since 2011 even after accounting for the $9 billion raised from the Kingdom's first international sale of Islamic bonds.

As the chart below shows, according to SAMA, Saudi net foreign assets fell by $8.5 billion from the previous month to $493 billion the lowest in six years, bringing the decline this year to $36 billion. Over the past three years, Saudi foreign reserves have dropped by a third from a peak of more than $730 billion in 2014 after the plunge in oil prices, prompting the IMF to warn that the kingdom may run out of financial assets needed to support spending within five years.

One could go on and on, I suppose, but one pretty much gets the picture at this point. This may explain why Saudi Arabia did the unthinkable last month: it met with Iraq to strengthen ties against their common enemy: Iran.

Note the x-axis on the graph above: note that time frame -- we're not talking decades, we're talking about three years.

My hunch: we're going to see some policy changes in Saudi Arabia over the next few months. The King cannot possibly be happy with his new finance minister.

By the way, and this is huge: I said when I first started following this story some months ago, that it appeared Saudi's foreign reserve assets were falling about $3 to $5 billion month-over-month. Anything over $5 billion should get everyone's attention. But now as the assets dwindle, on a percentage basis, $3 to $5 billion is a much bigger loss. So, the $8.5 billion loss, month-over-mont, just reported by zerohedge above is quite remarkable.

Disclaimer: I often make simple arithmetic errors. If this information is important to you, go to the source.
Posted by Bruce Oksol at 11:54 AM No comments:

OPEC imports into the US -- June, 2017, data posted. I'm starting to lose interest in this subject:
But will continue to follow it for awhile.

Saudi imports into the US. 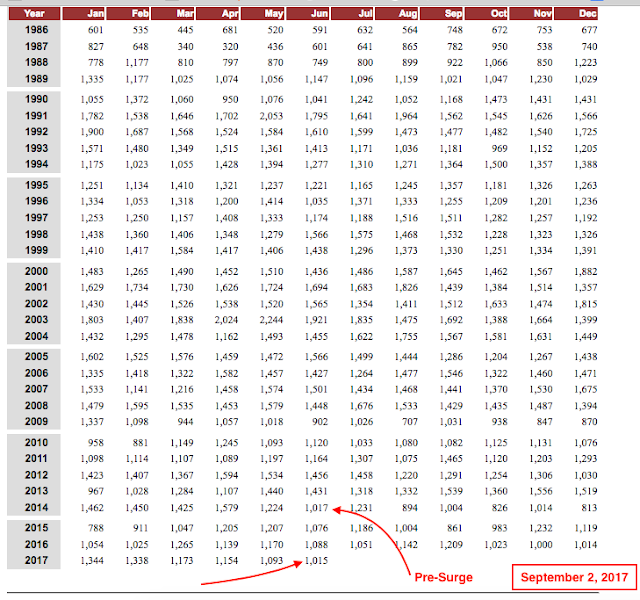 OPEC imports into the US. 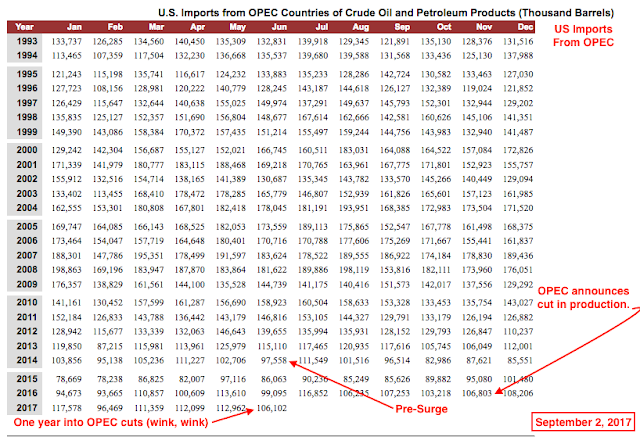 BR's Bullrush - Haymaker wells In Elidah oil field are all back on line.
Posted by Bruce Oksol at 10:45 AM No comments: