Mid-Atlantic gasoline supplies are now more than 5 million barrels lower than year-ago levels, an impressive decline considering stockpiles in the region swelled to 42.3 million in February -- the highest level in government records going back to 1990.

“East Coast importers are being much more disciplined in terms of their purchases, mindful of avoiding a replay of the supply glut we saw last summer,” said Matt Smith, ClipperData LLC’s director of commodity research.

This time last year, gasoline futures traded on the New York Mercantile Exchange signaled the East Coast gasoline glut wasn’t going anywhere as August futures were cheaper than September for the first time in eight years. That spread is back to its typical backwardated structure this July, which is a relief to suppliers ready to flip their tanks to winter-grade fuels.

Total U.S. gasoline demand slowed in the first three months of this year after reaching a record high 9.66 million barrels a day in June 2016. This trend finally reversed in April as consumption rose 0.1 percent from the prior year.

One swallow does not a spring make. Check back next week.
Posted by Bruce Oksol at 10:23 PM No comments: Links to this post

July 15, 2017: NDIC says the reason for all the DUCs -- oil producers are drilling Bakken wels faster than they can bring them in due to a shortage of experienced workers. One wonders if the Permian is attracting the workers? But this wouldn't explain the 1500 shut-in wells, I wouldn't think.

Also, NDIC says it will be another month before the impact of the DAPL will be known. The most recent data (May, 2017, data) shows that CBR accounted for about one-fourth of North Dakota oil, but in June that percentage should drop as DAPL data starts showing up. How much does transportation cost ND operators? WTI: $46/bbl; Bakken sweet oil: $35. Ouch. Once DAPL hits its stride, NDIC sees the spread closer to $6 or $7. See discussion regarding this pricing at the link.

Usual disclaimer: done quickly; assume factual and/or typographical errors; if this information is important to you, go to the source.

Note the jump in "inactive wells" -- now, over 1,500 -- and this does not count the 850 DUCs. Over 1,500 completed and producing wells have been taken off-line for various reasons. Many of them are taken off-line simply because neighboring wells are being fracked. Had these 1,500 wells remained on-line one could imagine that North Dakota would have had another record-breaking crude oil production number. Which brings us, once again, to the blog's theme song, it's only make believe ...


It's Only Make Believe, Conway Twitty

Posted by Bruce Oksol at 4:54 PM No comments: Links to this post

I leave home for a few hours and am now away from cable television and I see that the stock market indices all soared to close the day:
I would love to hear what CNBC naysayers have to say about the Trump rally now. Traders must have finally paid attention to Jamie Dimon.

Hmmm, T+70 then. T+175 now and the market is hitting record-setting highs. "Sell in May, go away" may not have been the best advice back in March. My two favorite posts in the past two weeks:

In addition to everything else, perhaps the best camera work ever.


Cry Me A River, Mad Dogs and Englishmen</center>
Posted by Bruce Oksol at 2:50 PM No comments: Links to this post

The Woodlands-based Summit Midstream Partners LP and XTO Energy Inc., a subsidiary of Exxon Mobil Corp., announced July 7 a deal for the creation of a new natural gas gathering and processing system. Data points:
By the way, XTO will be moving its headquarters from Fort Worth to Exxon Mobil's 385-acre Springwoods Village campus between Houston and The Woodlands.

Meanwhile, also from bizjournals, Linn Energy subsidiary changes name and is building a gas plant in SCOOP/STACK.
should be in operation by this time next year (making America great)
Posted by Bruce Oksol at 2:42 PM No comments: Links to this post

A reader sent me this link, a new book on Williston, boomtown. Over at Amazon: https://www.amazon.com/New-Wild-West-Fracking-Boomtown/dp/1250064929.

Based on the information at Amazon regarding this book, I would heartily recommend reading or watching the movie Dr Zhivago to help put the Williston/Boomtown book into perspective.

From The Wall Street Journal.


One of Whataburger’s most popular items isn’t on the takeout menu, but diners walk out with it all the time.

The Texas-based burger chain is so beloved in the South that its “table tents”—the little plastic A-frame order numbers customers get as they wait for their food to be delivered—often don’t make it back to the stack at the cash register.People pilfer them constantly. Some swipe their lucky numbers, others their birthday or anniversary digits. Athletes go for their jersey numerals. Die-hards want a complete set of 1 through 96.

Misappropriating an orange-and-white-striped Whataburger order number has become a rite of passage of sorts in the Lone Star State, where some posit you can’t be truly Texan unless you’ve filched a tent or two…or 10.

Finally: after almost a week with no wells coming off the confidential list, two come off the list today.

Finally: all that anxiety over Amazon being played down a bit. Some talking heads remind viewers of all the concern about Walmart years ago. From yesterday, an example of one analyst who seems to be a bit concerned about Amazon's affect on the overall economy. If sounds like he may need to get back on his meds. If the link is broken google - 'Amazonification' of Main St. is killing wages, causing Japan-like deflation, strategist says.

Top states for business, by CNBC criteria, in which educated workforce is a key factor.
Of interest:
From a reader via Facebook: 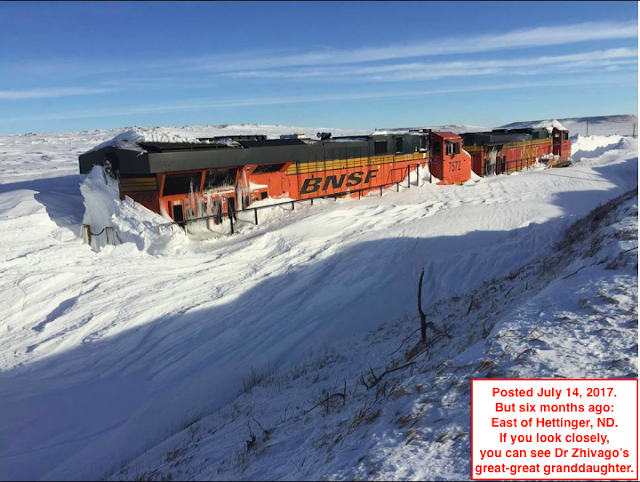 Posted by Bruce Oksol at 8:28 AM No comments: Links to this post


For much of the past few years, natural gas at Northeast demand market hubs has been priced at deep discounts, particularly in the low-demand summer months, because of the flood of Marcellus Shale gas that couldn’t go anywhere else.

But now, those markets could soon see some upward pressure as pipeline projects that will expand takeaway capacity from the region come online.

One of those projects is Williams’s Transco Pipeline Dalton Expansion, which includes an expansion of Transco’s mainline as well as a new, “greenfield” lateral.

The project has already commenced partial-path service to move as much as 448 MMcf/d south on the mainline from Transco’s Zone 6 in New Jersey to its Zone 4 segment in Mississippi. And just yesterday (Thursday, July 13), Transco submitted a request with the Federal Energy Regulatory Commission (FERC) to place the remaining portion — the new Dalton Lateral pipeline extension and related connections — into service less than three weeks from now (on August 1). Today, we provide an update on the project and potential market effects.

Bulls. If you run out of things to do, google -- possibility of $100-oil as early as 2018. I was surprised at a) the number of hits; and, b) the rationale for this bullish case. Oilprice.com had two of the first three hits, including this one: $120 oil as soon as 2018? I think the writer should have added about four "question marks." LOL. At Yahoo Search that was the first hit.

Lobster boom: on CNBC, record lobster catch being reported on the US Atlantic Coast. From Boston.com: Maine fishermen set lobster record for seventh straight year. Regular readers know my fascination with this subject. So much for global warming hurting the lobster. See this post from March 19, 2017, for best example of "Fake News" ever: 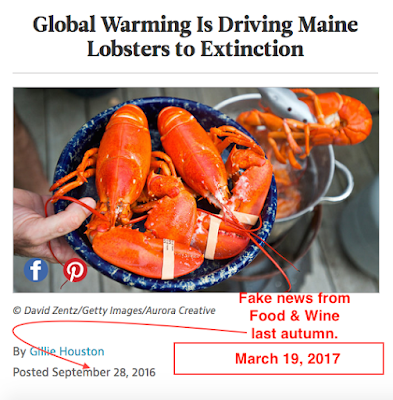 Posted by Bruce Oksol at 4:36 AM No comments: Links to this post

Glut: I don't know how others feel about this, but I am somewhat amazed. I would have thought US natural gas production would have set another record this year; it will not (apparently). US natural gas output is forecast to be up in 2017, but still below 2015 record. [See first comment: I will add these links to the "Data Links" page:
IPO: just yesterday I posted my thoughts that the Saudi Aramco IPO might not be launched. The tea leaves suggest I am wrong. London is considering relaxing its "IPO rules" to attract the IPO be launched on the London exchange.

On the other hand. Reuters is reporting "robust Chinese demand" seen helping drain glut.  On this, everyone agrees: it's no longer a supply issue, it's a demand issue. Well, almost everyone agrees. I've seen an occasional contrarian say otherwise. The WSJ reported the same thing earlier in the month (this may be a re-post: I can't remember if I have linked this before): US oil producers find a surprise new market: China. China, a large oil importer, is buying nearly 100,000 bopd from the US.

Going green. This is probably the biggest non-energy business story of the week. The Cannabist reports that monthly marijuana sales of $100 million is the "new norm" in Colorado. State politicians across the country cannot ignore this huge new revenue base. More states are going to legalize marijuana and tax it heavily.

Connecting dots: if I'm in the mood later this weekend, I will blog a stand-along post on this very interesting phenomenon.

Posted by Bruce Oksol at 4:11 AM No comments: Links to this post