Canadian pipeline: Kinder Morgan commits to pipe linking oil-sands crude to Asian markets. From Bloomberg: Kinder Morgan Inc. has committed to expanding a pipeline that will allow Canadian crude to be exported to Asia, a controversial C$7.4 billion ($5.5 billion) project that’s set to face revitalized opposition amid political upheaval in the nation’s Pacific Coast province. The Houston-based company announced its final investment decision for the Trans Mountain expansion project Thursday, saying it expects to secure enough financing from an initial public offering of its Canadian subsidiary to proceed with the project. It expects to raise C$1.75 billion from the IPO by May 31, according to a statement. 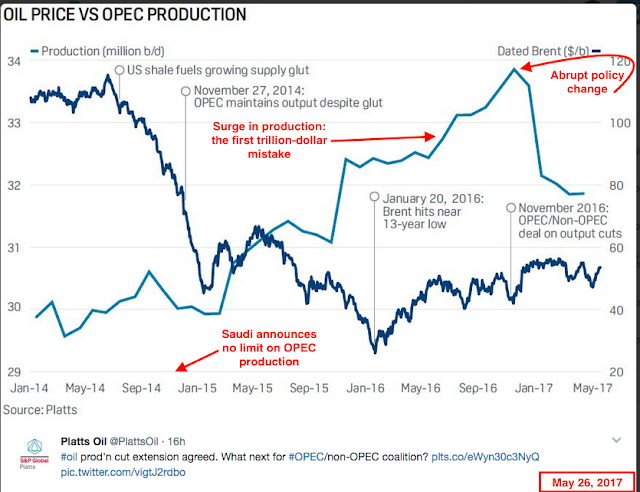 
Q: What is meant by Dated Brent? How is the Oil Official Selling Price (OSP) decided? What does OSP Premium signify?

A: Brent is a particular crude oil - all crudes are slightly different and therefore have a different value. The premium (or discount) adjusts for this difference. When the OSP is decided, normally they are assessing the premium. They will look at the amount of each product that can be produced from the oil, the value of each component and then assess the premium from the difference between their crude and Brent.

Dated Brent is a benchmark assessment of the price of physical, light North Sea crude oil. The term "Dated Brent" refers to physical cargoes of crude oil in the North Sea that have been assigned specific delivery dates. Each dated cargo of crude oil is often traded more than once as it makes its way to delivery to refineries -- where crude is transformed into products like gasoline, diesel, jet fuel, and more.


"Exports to the US will drop measurably " said AlFalih. Credibility of Saudi strategy in this sentence. Easily monitored. [One can start here.]


This last point is a nightmare scenario of sorts for Tesla. The Model 3 could become the car that eats the company. With current distribution, there have been some indications that annual sales of the Model S and Model X luxury vehicles could plateau at about 100,000.

Even if the figure were double that, Tesla would still need to sell 800,000 Model 3s and mass-market variants, such as the Model Y crossover and possibly a compact pickup truck. Production at that level would mean Tesla would need to build a new factory or set up assembly lines at its Nevada Gigafactory. The capital expenditure to pull this off would be staggering for a company that isn't making money.

Ford, by contrast, has made over $20 billion in the past two years.

Incredibly poor reporting and worse, a fake headline. From a reader:


DAPL leak not a weld but a flange on a line connected to DAPL and a valve at a pump station....not equipment tested during the hydro where the line is pressured above it's maximum allowable operating pressure ....water test before crude introduced.

This is the week that OPEC agreed to extend production cuts (wink, wink) for a full nine months, with no exit plan. The price of oil promptly plunged 5%.

Operations
WPX reports a Bakken well that produces almost 60,000 bbls in one month
A Madison well northeast of Minot is really quite remarkable
Some see 80 rigs in 2018 in North Dakota

Targa: New Natural Gas Liquids Pipeline From The Permian To The Coast -- May 26, 2016


Targa Resources in the third quarter of 2014 completed a 3 MMb/month expansion of its LPG export terminal in Galena Park, TX (also on the Houston Ship Channel) that increased the facility’s capacity to 7MMb/month, or about 233 Mb/d. Like Enterprise’s terminal nearby,

Targa’s Galena Park facility has docks big enough for VLGCs; smaller LPG carriers load there too. Targa has previously indicated they expect to export at least 5 MMb/month in 2016 (or 167 Mb/d), on average.  So far this year they are ahead of that goal, shipping out 191 Mb/d in the first three months of 2016, 23% of total Gulf Coast exports.

RBN Energy has many, many posts on Targa and natural gas pipelines in the Permian.

The mainstream media can write as much as they want on wind and solar, but in the big scheme of things, wind and solar are incredibly small niche players in the energy sector.

What a wonderful person. Barbara Walters interviews Dolly Parton, 1977. Dolly is a class act; Barbara, not so much.

I haven't read the article yet, I will in about 30 seconds, but this is what I think we'll read. Prince Salman, Saudi Aramco, Saudi Arabia are in desperate straits. They are embarking on a huge pln to transition from E&P to refining. And they don't have many places to do that: essentially the Araiban peninsula and along the Texas coast.

That means one thing: a lot of Saudi money is going to flow into Texas.

Think about that. Wow.

Now to read the article. Wow, did I hit the nail on the head, or what? Here's the lede:

Motiva, which finalized its divorce from Royal Dutch Shell in the beginning of May, said it plans to spend close to $18 billion in the U.S., largely along the Gulf Coast, within the next five years.

Although scant on details, this comes after Motiva already expanded the Port Arthur Refinery in recent years. Motiva emphasized it will continue to expand its crown jewel asset in Texas near the Louisiana border.

More at the link, but that's the gist.
Posted by Bruce Oksol at 8:15 PM No comments:

Here's another example, sent to me by a reader.


As famed oil analyst Daniel Yergin said this week, there's been a "recalibration of costs" since mid-2014 that have let innovative U.S. producers make profits at far lower prices than ever before.

"When the prices started down, there was this widespread thinking $70 to $80 (a barrel, to be competitive)," Yergin told CNBC. "But it's been so innovative. It's almost like we're looking at Shale 2.0. It's almost a different industry than it was three years ago."

And forget all that talk about "peak oil."


That's changing all the calculations about how much oil is in the ground. Forget "peak oil": Just this month, the U.S. Geological Survey found the so-called Spraberry Formation in Texas holds 4.2 billion barrels of recoverable oil at current prices, not the 510 million barrels estimated 10 years ago.

From basically nothing in 2000, frackers today produce more than half of all U.S. oil on the market.

Workforce: Rigzone has an interesting article on workforce in US shale sector. Some data points:
My hunch: won't amount to much of a problem in the Bakken.

Since I don't have BNSF to follow any more. Note: this is only the past week: 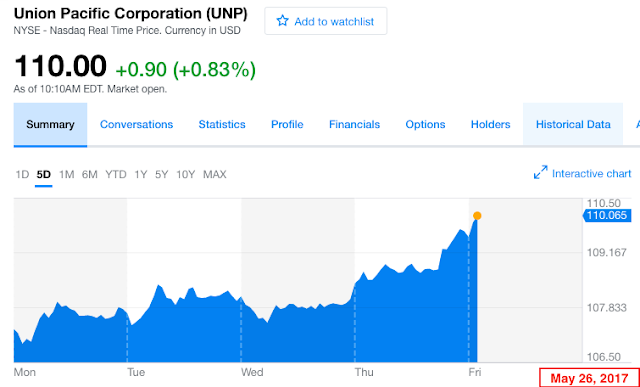 For what it was worth, CNBC had a short segment this morning on Americans "ditching" pasta due to concerns about obesity and gluten. They reported that Italians still eat record amounts of pasta. Americans eat about six pounds of pasta per person per year; Italians, about 33 pounds.

So, how do obesity rates compare?

The top ten most obese OECD countries, 2014 (interesting to see UK and its former colonies make up more than half the top-ten list):

If you look at 192 countries around the world, pasta-eating countries are nowhere near the top:


1. Cook Islands -- in fact the South Pacific islands -- the ones that are sinking due to rising sea levels -- or maybe due to something else -- comprise the top five or six spots
2. the Middle Eastern countries of Kuwait, UAE, Bahrain, and Saudi Arabia pretty much round out the top 20, and all of those have obesity rates higher than the US
3. finally, we get to the US, at #19 on the list, followed by the Caribbean, UK and former colonies, Mexico, Chile, more south Pacific islands, and so forth
4. Finally, after going through most of the "recognizable" names in the rest of the world, Europe, South America, and Asia, we finally get to Italy -- the pasta-eating capital of the world ; coming in at #90
5. second from the bottom, the country where little pasta (or any real food for that matter) is eaten, North Korea, or known more prosaically as the Democrate People's Republic of Kore, #191 in a list of 192 countries

For what it's worth: I don't think pasta is the problem.

But that does surprise me --- one has to go through a long, long list to get to Italy. Where does the country best known for the healthy Mediterranean diet stand (or sit, as the case may be), Greece: #79.

It should be noted that the range of obesity (percent of obese adults) varies by very, very little once you get past the top 60 countries or so. The exception, of course, are the South Pacific Islands at the top, and the poverty-stricken countries at the bottom. Two exceptions at the bottom of the list: India (174) and Japan (185) out of 192 countries. I was surprised to see Cuba so high up the list, #57.

Between Maxine Waters, Barbra Striesand, and Nancy Pelosi, it's hard to say who has the best political jokes. Now, Nancy Pelosi is complaining that President Trump is not visiting foreign countries in alphabetical order.
Posted by Bruce Oksol at 8:45 AM No comments:


RBN Energy: regional sand mines for fracking starting to pick up in Texas.
I'm not seeing either in the Bakken: the "standard" horizontal in the Bakken is the "typical" long lateral, about 9,000 feet. And the amount of sand being used is still well under 10 million lbs, though it does seem to be creeping toward 10 million lbs. A 9,000-foot lateral using 3,000 pounds of sand would amount to 27 million lbs. I can count on one hand, maybe two, where more than 20 million lbs of sand has been used to frack a well in the Bakken. At least as far as I am aware.

I don't capture them all but I try to remember to update the list of high-intensity fracks in the Bakken at at this post.

Despite the year-over-year increase, 2017 marks the second-lowest price ahead of the Memorial Day weekend since 2009, when the national average price of retail regular gasoline was $2.31/gal.

Posted by Bruce Oksol at 8:23 AM No comments: