January 18, 2019: announced today, North Korea's Kim and US president Trump will meet at the end of February, 2019. Kim has the advantage: Trump's first term is almost over; the mainstream media has convinced Americans that Trump's "success" so far has been nothing but failure. Kim simply has to "dither" for two more years, hoping that someone like Bernie Sanders gets elected. Or, same facts, but Trump eager to deal.
December 13, 2018: groundbreaking ceremony for cross-border rail and road. 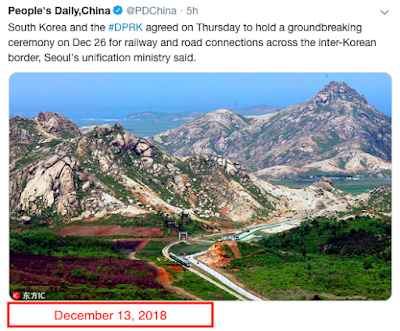 August 11, 2018: tea leaves suggest the Trump - Kim love fest is cooling. It started cooling after Kim visited China following the summit in Singapore. The love fest may have worsened due to the US-China trade war. 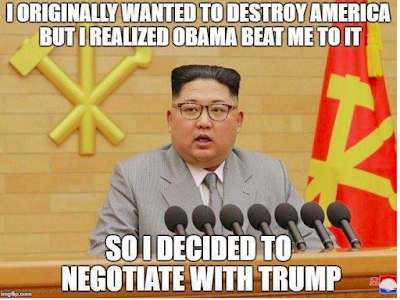 April 26, 2018: who would have thought -- negotiators are working toward a denuclearized Korean Peninsula. North Korea will denuclearize with no preconditions. Kim and Moon meet at the DMZ.

March 27, 2018: North Korea sending huge delegation to Beijing by train -- Kim Jung Un might be among the delegation -- this would be the Asian communist pre-summit meeting prior to the US-NOKO summit in May, 2018. This is really quite incredible Regardless of how this plays out, it appears, that at least for the moment, Trump has managed to shake things up in Asia. At the end of the day, China needs to keep its billions of adolescent males employed.

March 26, 2018: Kim Jung Un making unprecedented visit to Beijing -- going by train. Unprecedented. Going to Beijing. Some suggest that Kim Jung Un is serious about denuclearization. This will incredibly interesting if an announcement of this nature is announced before summer -- one wonders if the mainstream media will even cover the announcement.

March 18, 2018: talk about a turn of events. Through South Korean intermediaries, North Korea has invited to meet one-on-one with President Trump, suggesting they are ready to talk disarmament. Congress has lets NoKo know that they will not let Kim Jung Un "play" Trump.

September 22, 2017: NK threatens to test H-bomb over the Pacific Ocean.

August 8, 2017: President Trump's most recent verbal response is clearer than ever.

July 30, 2017: Less than a month ago, the dovish South Korea president did not want US THAAD (anti-missile protection); now that NOKO has launched two ICBM missiles in the past 48 hours, now he wants his own nuclear missiles. What a naive politician. Finally sees the light.

July 28, 2017: NOKO launches an ICBM with a range that can hit the US. Within 24 hours, a political hack is fired as Trump's chief of staff, and replaced by a retired US Marine general.

May 14, 2017: NOKO launches another ballistic missile. Goes 500 miles. For NOKO: war is an existential event. For the US: war is a military exercise.

April 4, 2017: NOKO fires missile into sea off east coast of South Korea. Meanwhile, USA has warned that the "clock has run out" on North Korea. Chinese President XI to meet with President Trump this weekend. Can anyone say "Chinese fireworks?"

March 28, 2017: NOKO could be in final stages of nuke test; Japan pre-emptive strike?

March 17, 2017: no links; stories everywhere. Rhetoric rising. SecState Tillerson says diplomacy has failed. Says all options -- including nuclear weapons -- in SOKO, Japan -- are on the table. To the best of my knowledge this is the first the US has confronted NOKO mano a mano, instead of easing sanctions.

April 6, 2013: update on the Korean Missile Crisis - a) the US scuttles a long-planned ICBM test launch out of Vandenberg, CA; b) North Korea says its strategic objective is to gain more concessions form the West; c) past years suggest that food situation is now at its worst -- the end of a harsh winter; food supplies running out ahead of a new growing season; need food imported from the west. It will be interesting to see if President Obama gives into North Korea and everything returns to "normal." If so, this has turned out to be nothing more than another episode in this long story.


Original Post
This too may pass but the increasing number of stories on NOKO, SOKO, Japan, China, US could suggest to someone that the narrative in Washington, DC, is about to change. My hunch is the US, Japan, and SOKO are having some serious discussions.

"Boost phase interceptor" is the new catchphrase.
Posted by Bruce Oksol at 8:20 PM No comments: Links to this post

With Regard To Oil And The Price Of Oil -- For Both Russia And Saudi Arabia These Are Existential Issues -- March 14, 2017

This is quite interesting.

Three countries with existential issues:
For decades, as North Korea came closer and closer to the edge, they upped the nuclear ante and the western world responded by sending them cash. Under Trump, that has come to an end. Instead of cash, Trump is sending drones and US Navy Seal Team 6.

By the way, it's not the US shale sector that's riding the coattails of Saudi's cut in oil production, it's Russia. Russia is taking advantage of Saudi's predicament.

By the way, did you all see the break-even price in the Bakken today? $20. [Update: see first comment.]

Permian doesn't come close to $20 for those who paid $40,000/acre for fringe areas in the Permian. This could get ugly.

Posted by Bruce Oksol at 8:02 PM No comments: Links to this post

Fact: Nieman-Marcus about to go under.

What does Dr Hook's Sylvia's Mother and Johnny Cash's A Boy Named Sue have in common?

To what classical music is Allan Sherman's Camp Granada set to?

1. Sylvia's Mother  and A Boy Named Sue: both written by Shel Silverstein. I came across that only by serendipity. The latter song has always intrigued me and I was sure Johnny Cash had written it; he wrote much of his own music (at least I thought). The more I read about Silverstein the more "amazed" I am. It is amazing how creative some folks are.

2. The second one turns out not to be difficult at all, but I had no clue. Wikipedia provides the answer: Camp Granada was set to Dance of the Hours, from an opera.

I happened to hear Dance of the Hours the other day and immediately recognized Allan Sherman's song. Camp Granada was one of my favorite songs back in the day.

By the way, Allan Sherman had a line in Camp Granada that seemed "out of place" in the song. However, after reading Wikipedia, the dots connect. It is quite amazing. I do believe public school students in the northeastern (US) schools back in the '40s and '50s had an incredible education.  I assume not so true any more.
Posted by Bruce Oksol at 7:55 PM No comments: Links to this post

To the best of my knowledge, this well was not refracked. It was fracked once, back in 2013, according to FracFocus. Seventeen (17) days at 12,079 bbls extrapolates to 21,000 bbls for a 30-day month. Regular and/or long-time readers can connect the dots.

Posted by Bruce Oksol at 7:32 PM No comments: Links to this post

Posted by Bruce Oksol at 6:34 PM No comments: Links to this post


Goldman Sachs is sounding almost as rattled as the Saudis. Backwardation call has taken a bit of a shoeing in the past week.

Javier Blas at twitter has document suggesting the Saudis are really rattled, saying ...


"the difference between what the market observes as production, and the actual supply levels in any given month, is due to operational factors that are influenced by storage adjustments."

How does one explain:
Operational factors? LOL.

It took a bit of doing, but I found the original links for this two-part article. A reader -- thank you, very much, alerted me to Part 2, but Part 1 is just as important.

So, here is the original link, with links to Part 1 and Part 2, which, I believe, will download as PDFs in both cases.

Part 1 was discussed at this post. Part 1 has to do with the technology and the shale revolution.

Part 2, in this post, has to do with how the shale revolution is changing global geo-politics. This second part is titled: Shale is reshaping the world: three new wars.
When I look at just this much of this interview I think immediately: politicians like Angela Merkel and Ted Cruz won't understand it. Business men like Rex Tillerson and Donald Trump will understand it. Ideologues like Barack Obama and Al Gore won't understand it, but worse, they both bet on the wrong horse. Even if one doesn't understand horse-racing one can still get lucky and win a big race (my wife has proven that); but in Al Gore's case, and in Barack Obama's case, they bet on the wrong horse.

Both Part 1 and Part 2 have been archived.
Posted by Bruce Oksol at 3:03 PM No comments: Links to this post

It took a bit of doing, but I found the original links for this two-part article. A reader -- thank you, very much, alerted me to Part 2, but Part 1 is just as important.

So, here is the original link, with links to Part 1 and Part 2, which, I believe, will download as PDFs in both cases.

The interviewee interpreted the first question to be this: "we've" been doing horizontal drilling and fracking since at least 1947. What's different this time that has made it so successful? The answer:  seismic technology.

Back to the recent article:


Seismic has been around in the industry since the late 1970s. It's not new, either. But the old seismic is a radically different creature from what we have today. It's like comparing a Toyota hybrid to an 18-wheel from the 1950s. Yes, technically, they're of the same technological tree, but they're so radically different. With the old seismic, you have these giant bulbs of oil-saturated rock that didn't require much of a sonar cross-section to show up when you would do seismic. The news one can pick up deposits about the size of a 500-ml water bottle.

Did I mention that North Dakota has the largest buried microseismic array in the world. Something tells me that some of the new acreage bought in the Permian for $40,000/acre does not have such an array in place, yet.

And, note: that was in 2010 that it was reported that North Dakota had the largest buried microseismic array in the world. That was seven years ago; one can imagine how much has been done since then.

Very early in the article, the interviewee says that "micro-seismic is so new it did not exist 30 months ago."

Obviously there's a disconnect. But we will press on.

Later: re-fracking -- going back to fields for the second, third, and fourth time. One can leave the micro-seismic geophones in place, to be used the next time a well is re-fracked, or a new well is fracked for the first time.

The interviewee suggests that most companies are not yet using micro-seismic technology.

So many incredible data points in the article, like this one, which I have said so many times, I have lost count:

I'm going to quit there for now.

The articles have been archived.
Posted by Bruce Oksol at 2:57 PM No comments: Links to this post

Reminder: articles in small regional newspapers tend to disappear after a few months or become accessible only through subscription.

Five data points that jumped out at me:

Posted by Bruce Oksol at 11:08 AM No comments: Links to this post 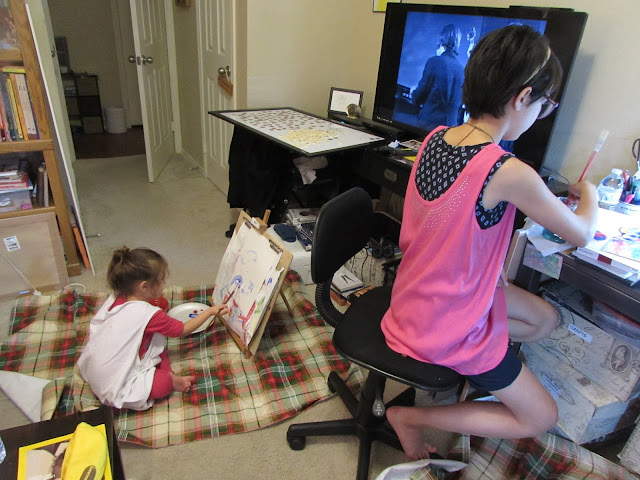 Beatles on the video.
Bananagram on the board.
Painting.
Posted by Bruce Oksol at 9:08 AM No comments: Links to this post