Monday night. Monday Night Football is a bust. Indianapolis, 14, in the first quarter, the Jets, 0. No more football tonight for me. Even if the Jets turn it around and win 63 - 14, I'm not interested in either team.

The London Review of Books: I received the print edition today but read most of it on-line two weeks ago -- which begs the question. Why do they post the issue online which almost anyone can access for free two weeks before subscribers get their print edition? I assume the folks in London get their copies a lot sooner than I do.

One essay I had not read on-line was "Diary" by Sheila Fitzpatrick, a regular feature by different contributors. Hers was an ungodly, painful essay on the 1917 Russian Revolution. I read some of it, but to read all of it would require a fair amount of Russian vodka, and I don't drink vodka. At all.

A quick scan of the article was interesting, though. Most of it was about Andrei Platonov, "chronicler of the Revolution." Sounded a lot like Yurii Zhivago, as in "Dr Zhivago." I went back and re-read my notes on "Dr Zhivago." I had forgotten how incredibly sad the novel was, especially the ending. It's not a book I would recommend anyone reading during long winter evenings in Scotland if already feeling depressed and suicidal.

The writer, Ms Fitzpatrick, mentions "Soviet nostalgics like Svetlana Aleievich" -- winner of the 2015 Nobel Prize in Literature. I am reading her non-fiction work Secondhand Time. So that was nice. But as noted, to really read the article one needs a fair amount of vodka and I don't drink vodka.

So, what's one to do? Ah, yes, Driving home tonight, chauffeuring granddaughter #2 back and forth / to and from soccer, I got to thinking about sanctuary cities and then that spread to more expansive thinking on the subject.

Sanctuary cities. For Texans, this is a great concept. Think about it. The sanctuary city issue is similar to the marijuana laws in the country right now. In both cases (drugs and illegal aliens) the federal government is quite clear. But there is that pesky problem of states voting to legalize marijuana, and cities declaring themselves safe havens for illegal immigrants.

Right now, it's worked out fairly well. It's working the same way as Taiwan and China. As long as no one really looks too closely, China is happy with things the way they are, as is Taiwan. The risk now: Trump will screw things up.

Same with the illegal alien story and sanctuary cities. It's actually working out quite well. The cities that want to be safe havens, let them be. The risk now: Trump will screw things up.

The Texas governor has clearly stated that there will be no sanctuary cities in Texas. Many other governors will do the same thing (if they are smart). Meanwhile, certain states will have several sanctuary cities and many states man have at least one sanctuary city.

Now, where do you suppose all those illegal aliens in Texas are going to go?

The worse thing that can happen right now is Trump screwing things up.

States like Texas need to promote free bus transportation to sanctuary cities in California. If Texas is fortunate, New Mexico will become a sanctuary state, and bus fare to New Mexico will be even less expensive than sending folks all the way to California. Throw in $1,000 in spending money and I can guarantee you Texas will be illegal-alien free by the end of Trump's first term.

Likewise, offer fast-track citizenship for those folks coming up from Mexico if they will help build the "wall" and then agree to a four-year commitment as border-control officers. The US Navy fast-tracked Filipinos for decades if they would join the US Navy and serve honorably. And those Filipinos had never even been in the states; they were recruited in Rodrigo Duterte's backyard.

College campuses in states where sanctuary cities are allowed need to be off-limits to US immigration officials. Most illegal aliens who are attending universities and maintaining a good academic record probably came here when they were toddlers, and many of them do not even know they are here illegally, according to 60 Minutes which does not do "fake stories." These kids are doing fine. Fast-track them, and make them citizens.

Have no mercy on illegal aliens arrested for serious drug-related crimes and violent crimes using guns and knives. Fly them to GITMO until their cases are heard; GITMO occupancy rate is about 20% (if that high) and a hotel owner like Trump knows an occupancy rate that low is not how to run a business.

In fact, if Trump is serious about deporting up to 2 million no-goodniks, he's is going to need a lot of Section 8a housing. As far as I know, Section 8a housing does not yet exist, but GITMO housing for sociopathic undocumented low-lifes would be a subsection "a" of Section 8 housing and would give Ben Carson something to do. Subsection "b" could be set aside for politicians convicted of non-violent felonies.

So how's that NFL game going? Before signing off I thought I would check in on the game. 41 - 10. Indianapolis has apparently put in their third-string quarterback to give him some playing time.
Posted by Bruce Oksol at 10:05 PM No comments:

Speaking Of Jobs -- For The Archives -- Nuclear Power In Illinois

In an article about Illinois deciding at the last minute to "keep" two nuclear power plants, these two items caught me eye:

It's amazing that this was even as issue.

Nuclear energy at 5 cents/kWh cannot compete with "cheap" natural gas. Apparently, Illinois subsidies for nuclear energy will be1 cent/kWh "but only until market conditions change."

Wind energy in Illinois is subsidized at 2.3 cents/kWh.

Solar energy in Illinois is subsidized at a whopping 21 cents/kWh.

I am probably the last one to know this. Google Chrome is considered a "battery hog." If your PC battery is not lasting as long as you would expect, and you are using Google Chrome, now you know. Google "google chrome battery drain." Too many hits to list.

Of the articles that I read that addressed that issue none explained why. Probably because it's very obvious what is going on. The analogy: compare how long your smart phone battery lasts when you ride the subway all day, compared to when it is sitting on your desk and not being used.
Posted by Bruce Oksol at 5:33 PM No comments:

These eleven wells are all sited in the same section and all run north-south parallel to each other. They were all taken off-line for 2.5 months, all coming off-line about the very same day, mid July, 2016, and all coming back on-line within the first week or so in September, 2016. I can find no evidence of any neighboring wells being fracked/completed during this time period. There are some wells on the confidential list but they appear too far away to affect these wells, though I could be mistaken.

Were the wells taken off-status while working on #30775? Update: in April, 2017, I noted that CLR had abandoned #30775. This well only produced a bit of oil on initial runs and then no more production. CLR tried to get the well to produced; unsuccessful. The well was put on "frack protect" in July, 2016.

From CLR's sundry/completion form for #30775: Note on IP: coil stuck in hole during clean out well shut in; will resume fishing operations in quarter 1 of 2016. 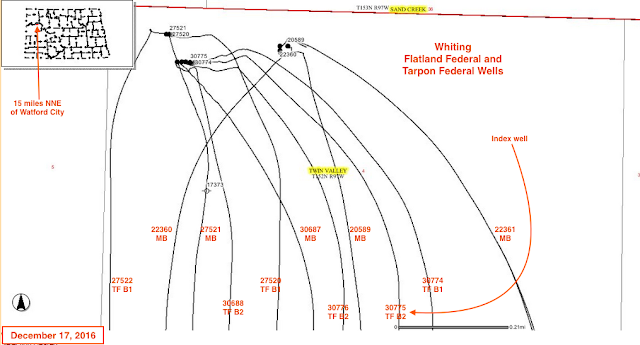 Posted by Bruce Oksol at 2:21 PM No comments:

End of OPEC? Over at SeekingAlpha. Pretty good article; worth the read. I bought into "swing producer" concept some years ago, but since then I have had second thoughts. More on that later, perhaps. I have said for the longest time that OPEC was a myth. Within OPEC it was always all about Saudi Arabia. Interestingly enough, now with resurgence of Iraq and Iran, maybe not so much. Can one say the production for KSA - Iraq - Iran to be about a 10-5-4 split?

Later, 7:16 p.m.: Something tells me the US Navy is having tons of fun following this story. See first comment.


A fighter jet based on the Russian aircraft carrier Admiral Kuznetsov skid off the deck during landing and became lost at sea after an arrestor gear line snapped and failed to stop the aircraft, the Russian Defense Ministry reported.

The Su-33 is the second aircraft that has been lost from the Kuznetsov fleet during its ongoing mission in the Mediterranean. Earlier, a Mig-29 fighter jet was not able to land and ran out of fuel because the deck crew of the carrier failed to fix a broken arrestor gear.

I think the carrier only carries a half-dozen aircraft; two down, four to go.


Original Post
So, what are the Russians up to off the coast of Syria? From the transponder, the Nikolay Chiker, latest position, the last ping was three days ago, December 2, 2016. At that time it was still midway between Crete and Tartus, Syria, it's "usual" spot, but moving at 14 knots (fairly fast) in a southeasterly direction, putting it moving toward Tartus. Currently the port of Tartus looks pretty "empty."

Remember all those articles written by millennials living on the East Coast that Americans would eventually give up their love affair with automobiles, preferring public transportation and bicycles?

Now this from Reuters sent to me by a reader (thank you):


US Department of Transportation says motor vehicle travel increased 2.9% in September from year before - Reuters.

OPEC agreed to "cut/freeze" production; price of oil edges up over the weekend. Hmmm. For investors, this seems to be an open book test.
Posted by Bruce Oksol at 8:55 AM No comments:

For background to this story, see these posts:
I think those posts provide more than enough background precluding another long note.

A reader who follows this area closely wrote this morning to suggest comparing:
The reader's very pithy remark: all of these after fracking. #20085 is "like a new well."

Scout ticket and roduction profile for #20085: