Mike Filloon has had four articles on the Bakken recently and now we have an article from Richard Zeits. This all suggests to me, along with other stories coming out of the Bakken, that things are "happening."

The newest contribution from Richard Zeits: shale oil -- the "upcycle" is already underway.

The article will disappear over time.

The comments are incredibly good. I particularly liked the comment about shareholders: agree 100%. I think a lot of folks forget that.


Two proposed initiatives that would have increased restrictions on oil and gas activity in Colorado failed to make the November 8, 2016, ballot because they did not collect enough valid signatures.

Backers submitted the signatures in early August. Initiative No. 75 would have let local governments to prohibit, control, or impose moratoriums on oil and gas development; enact local laws that are more restrictive than state laws; and bar the state from preempting such law.

Initiative No. 78 would have changed Colorado’s setback requirements for any new oil and gas development to at least 2,500 ft from the nearest occupied structure or other specified or locally designated area, and authorize the state or a local government to require that any such new development be more than 2,500 ft away from such structures.

One of my favorite pieces in The New Yorker was always "A Reporter At Large." This week's story: "The Moscow Laundromat: How Deutsche Bank helped Russians spirit billions out of that country."

I wonder if next week we will see "The DC Laundromat: How President Obama helped Iran get its half-billion dollars back."

Or even, "The DC Laundromat: How Solyndra served as a conduit for Democratic campaign contributions."

This is an absolutely worthless article, but it provides readers an update on where things stand, what people are talking about and what they are considering. It's a fluff piece to say the least. If interested, google ObamaCare marketplaces are in trouble what can we do NY Times.

Looks like Reed Abelson and Margot Sanger-Katz are two new nominees for the 2016 Geico Rock Award.

Rick Newman over at Yahoo!Finance has noted the same thing: ObamaCare is in trouble. It is interesting that mainstream media is finally willing to note the obvious -- now that President Obama is down to less than 150 days in office.

He has been so incredibly awful, even grandmother Hillary is starting to look good.

The genome size is usually state as the total number of base (A, T, C, and G) pairs; the human genome contains roughly 3 billion.

There is little correlation between the complexity of an organism and the size of its genome.
One thought: an Amoeba -- threatened by its environment much more than a human -- may need that size of toolbox. If the environment threatens me personally today, I can always flee. An Amoeba cannot flee very far nor very fast.

Human genes vary greatly in length; where the average protein-coding sequence of a gene is about 1,000 to 2,000 base pairs, long stretches of non-coding sequence interspersed between exons can extend the boundaries by 20,000 -- 100,000 base pairs. The largest known human gene, which encodes dystrophin (an important protein in the scaffolding of muscle cells), is 2.4 million base pairs long, of which only 14,000 actually code for the protein.

A selection of notable genomes that have been sequenced:

Human genome project: in less than 15 months, a draft sequence of 90% of the total human genome had been sequenced. The human genome sequencing project is of interest because:

No producing wells reported as being completed.

I don't understand this. When a file name includes PNC it means the permit has been cancelled. I would assume "SWD" means a salt water disposal well, but it makes no sense for this to be a SWD based on production. The well is still listed as being CONFIDENTIAL.

Screenshot of the area where #31247 is located: 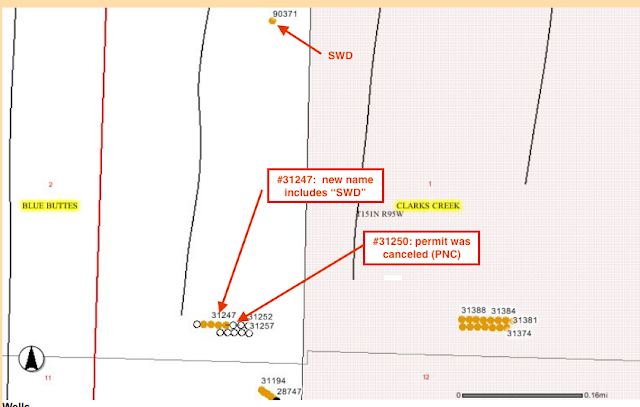 Best clip of the day! From MSNBC.

From Reuters: Truck carrying Takata air bag inflators explodes in U.S., killing one. No link; by the end of the day, the story will be everywhere -- for all I know it will be the lead story on ABC News with David Muir tonight.

Exxon Mobil backs out of Alaska LNG project. From The Wall Street Journal.


Exxon Mobil has decided not to invest in the next stage of a proposed natural gas export terminal in Alaska and said it would work with its partners to sell its interest in the project to the state government.

The company’s decision comes amid a global glut of natural gas that has depressed prices and follows the release of a Wood McKenzie report earlier this week concluding the Alaskan project “is one of the least competitive” of proposed liquefied natural gas plants worldwide.

A spokesman for Exxon said Friday that the company will no longer invest in the proposal, which is “transitioning to a state project.” Exxon owns about one-third of the project, according to the state.

Last November, the Alaskan government paid $65 million for TransCanada Corp. ’s 25% stake in the project, known as Alaska LNG, which is expected to cost between $45 billion and $65 billion.

It has yet to be approved for construction and wouldn’t start commercial shipments before 2023, according to filings by its corporate backers. The other backers, BP PLC and ConocoPhillips, each hold roughly 20% stakes and have signaled that they, too, could pull out.

Power surge in Texas. From The WSJ today:


A startling energy bonanza has gone almost unnoticed in Texas: the rise of renewables. The Lone Star state has added more wind-based generating capacity than any other, with wind turbines accounting for 16% of electrical generating capacity as of April, and is anticipating a huge surge in solar power. We report that at a time when debate is raging between political parties over climate change, and critics charge that “green energy” is little more than a government creation, Texas has taken an approach that works within the state’s free-market-based electricity system. And state officials say wind and solar are almost certain to play a significant and growing role in the state’s energy future even when federal subsidies decline in coming years.

Renewable energy in Texas. From The WSJ today.

EVs will be here faster than "we" think. From The WSJ today.

Death spiral: as many as one-third of US counties may have one ObamaCare option. Now it's all about monopolies. From The WSJ. One has to ask the question: if more and more folks opt out of ObamaCare will that improve the economy? Imagine what families could do with an extra $2,000/month in their wallets.

And now for another perspective: the Dakota Access Pipeline and the "law of Christendom." From Indian Country, TodayMediaNetwork. com.


RBN Energy: the series continues -- too much pipeline in the Marcellus / Utica?


Of all the demand markets in the U.S., the biggest prize eyed by Marcellus/Utica natural gas producers is the Gulf Coast region, where a combination of industrial demand, LNG exports and power generation projects is driving a need for more and more gas. And beyond the U.S. Gulf Coast states, there lies still another market capable of gobbling up even more of the excess Northeast gas supply: Mexico’s rapidly growing gas-fired generation sector ––that is, assuming pipelines in Texas can get it all the way there. There is over 4.0 Bcf/d of Marcellus/Utica-to-Gulf-Coast takeaway capacity planned to be completed over the next few years. Today, we look at the status and timing of Northeast pipeline takeaway projects targeting the Gulf Coast.

To answer this, we first looked at the RBN Northeast production outlook and prospects for supply growth under three commodity-price scenarios, concluding that efficiency gains and the uncompleted well inventory (DUCs) indicate that even the low production case will lead to at least some supply growth in the region. With that in mind, we turned our attention to upcoming takeaway capacity projects, organized into five outbound flow corridors that we defined for our analysis. Of the 24 projects RBN is tracking in our Midstream Infrastructure Database Interface (MIDI), six projects totaling 3.3 Bcf/d are headed to the New England and Mid-Atlantic states, or along what we call the East corridor; two projects adding up to 0.65 Bcf/d are planned for the Canadian corridor and four projects totaling 4.3 Bcf/d to the Midwest via Ohio ;and  four projects with a combined 5.2 Bcf/d to the Southeast along the Atlantic Coast are under development.

We also started our examination of what some of this new gas supply will do to natural gas markets along the Gulf Coas.

Today, we look at each of the projects that will flow Marcellus/Utica gas along the fifth and final corridor — the Gulf Coast via Ohio, aka the Promised Land of future natural gas demand.

Closing: it looks like the market closed up about 100 points. NYSE --
Mid-day trading: wow, up 120 points. How quickly the Fed became irrelevant. The Dow 30 is near its 52-week high, which would be another all-time high. NYSE:
Opening: so much for Janet Yellen's speech last Friday. The market surges 81 points on opening.  Late morning, the market (Dow 30) was up over 100 points. BRK-B surged to a new all-time high, flirting with $150. A big whoop. XLNX also continues to move up about one-half percent. NYSE:
Futures: not as bad as overnight reports suggested.
Posted by Bruce Oksol at 6:38 AM No comments: