The one thing that appears certain, however, is the Middle East is on a path toward social upheaval that will make the Arab Spring pale in comparison, if oil prices don't at least start rising toward where they were before the collapse began two years ago.

I think we will know more in September after OPEC meets.

My 30-second soundbite: Iran is on the way up; everyone else in the Mideast (except Israel, a special case) is on the way down.
Posted by Bruce Oksol at 5:37 PM No comments: Links to this post

Reminder: at the top of the sidebar at the right -- trending. From Sturgis: over a 100 Flickr photos.
Posted by Bruce Oksol at 11:33 AM No comments: Links to this post

Are North Dakotans living longer because of a bit of radon? Because of a few socks of radioactive waste lying (laying?) around? Who knows? Maybe.

Now, here it is, only a couple days later, and we get this huge story in today's Wall Street Journal: "Is A Little Dose of Radiation So Bad?"

The scientific basis for this view is known as the linear no-threshold model, or LNT, which holds that any amount of radiation increases someone’s cancer risk, with the danger rising along with the dose.

But Carol Marcus scoffs at the LNT model. As science, it’s “baloney,” she said, essentially in the same category as “the Earth is flat.” The white-haired, 77-year-old professor of nuclear medicine at the University of California, Los Angeles, with both an M.D. and Ph.D., is on a campaign to change the way America treats radiation.

In a pending petition, she is asking the Nuclear Regulatory Commission to abandon the LNT model, which her filing, quoting another critic, calls “the greatest scientific scandal of the 20th century.” Two similar petitions, signed by about two dozen academics and others, are also under NRC review.

She must have ties to North Dakota. LOL. She has too much common sense to be from elsewhere.

John Hands in CosmoSapiens opened up a lot of critical thinking for me.

The Last Thing On My Mind, Dolly Parton and Porter Wagoner
Posted by Bruce Oksol at 9:27 AM No comments: Links to this post 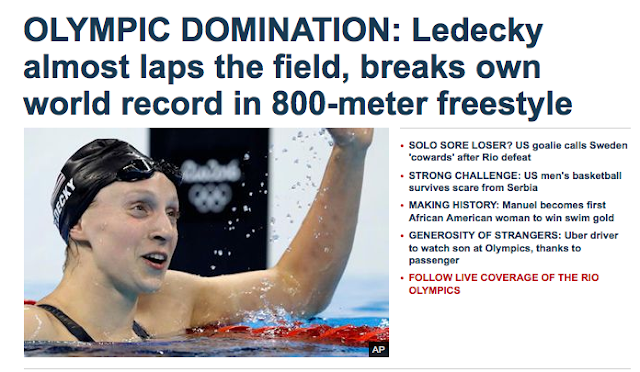 From the lede at The New York Times:


In 1968, a teenager in [Williston] North Dakota watched transfixed as Debbie Meyer won the 200-, 400- and 800-meter freestyle races at the Mexico City Olympics. The next time the teenager, already a competitive swimmer, got in the pool, she cut through the water repeating to herself, “I am Debbie Meyer.”

That teenager would grow up to become the mother of Katie Ledecky, who on Friday night became the first Olympian since Meyer to complete the 200, 400 and 800 trifecta. Ledecky lowered her seven-month-old world record in the 800 freestyle by two seconds with a time of 8 minutes 4.79 seconds. Her 400 split of 4:01.98 would have won the bronze in the 400 final last Sunday.

She finished 11.38 seconds ahead of the runner-up, Jazz Carlin of Britain, who clocked an 8:16.17. That was two-tenths of a second better than the bronze medalist, Boglarka Kapas of Hungary. The slim margin separating second and third threw into sharp relief the dominance of Ledecky, who owns the 13 fastest performances in history.

Four years ago, a 15-year-old Ledecky won the 800 freestyle in 8:14.63. She and Hungary’s Krisztina Egerszegi are the only swimmers to win gold medals in consecutive Olympics as teenagers. Ledecky started crying as she talked about completing this Olympics cycle by hitting all her goal times.

Wow, I wish Dr Hagan were alive to see this.

Past posts on Katie (most, but not all):

Posted by Bruce Oksol at 8:29 AM No comments: Links to this post

August 24, 2016: President Obama's Energy Czar says "fracking is good for the US." Specifically stated that in a speech to reassure folks that fracking was safe after the study below was "back on the table."


Original Post
This is not good, going into a possible Hillary presidency. Hillary has said she wants to ban fracking and plans a "war on fracking" like the Obama "war on coal." The "Scientific Board" wants a "re-do" on that EPA study that said fracking was safe.

However, the SAB stated in an Aug. 11 letter that more information from EPA was needed to support the draft assessment’s conclusions. In a report released last year, EPA said it did not find evidence that potential mechanisms by which fracking could impact drinking water had led to widespread, systemic impacts on U.S. drinking water resources.

EPA also stated in the June 2015 report that the number of identified cases where drinking water resources were affected were small compared with the number of hydraulically fractured wells. The SAB said it was particularly concerned that EPA did not support quantitatively in its conclusion about the lack of evidence of widespread, systemic impacts of hydraulic fracturing on drinking water resources and failed to describe the systems of interest, impact scale, or definitions of systemic and widespread.

There are some incredibly powerful forces that want US fracking to be banned: major oil with huge off-shore assets that are not being drilled; Iran; Saudi Arabia; those in the federal government who support Iran; every US environmental group; east coast governors.

From The WSJ: ObamaCare premiums are soaring 18% to 23% across the country.


Hillary Clinton admits she’s running to extend the Obama legacy, and so far she’s had a free ride in defending it. She hasn’t even had to explain the increasingly obvious failures of ObamaCare to deliver the affordable insurance that Democrats promised.


The Affordable Care Act is now rolling into its fourth year, and even liberals are starting to concede that the insurance exchanges are in distress and Congress may have to reopen the law. Premiums are high and soaring; insurers have booked multimillion-dollar losses and are terminating plans; and the customer pool is smaller, older and less healthy than the official projections.

The natural result is another round of rate shock for 2017. Insurers in 49 states have submitted their premium requests to regulators, and the average “enrollment-weighted” rate increase, which accounts for market share, is in the range of 18% to 23%. The Congressional Budget Office projected 8%.

Liberals call this evidence anecdotal and premature, and they’re right that bad anecdotes are easy to find: Geisinger Health System in Pennsylvania, a model of the integrated care that ObamaCare attempts to promote, wants a 40% rate increase for its insurance arm. The other liberal claim is that insurance commissioners will approve rate increases somewhat smaller than the insurer requests (maybe) and that consumers can switch to cheaper plans (assuming any are left).

The easy fix: a national health service run by the federal government. If Hillary wins and her supporters take the Senate, it's very possible. Folks forget that presidents are change agents and there are few things Hillary would like more to do than fix ObamaCare.

And folks wonder why retail sales are flat.
Posted by Bruce Oksol at 8:28 AM No comments: Links to this post

The big story of the week, of course, is another 2% drop in daily crude oil production in North Dakota, and suggestions that North Dakota is already under the one million bopd production threshold (data is delayed about 45 - 60 days). I believe Lynn Helms said that if "we" go under one million bopd it will take "a year or so" to get back over that threshold. Something like that. A lot of activity continues in the Bakken suggesting things will meander along; it will take awhile for folks to realize we are in the manufacturing phase of the Bakken.

The big international story is that OPEC has agreed to hold a meeting ahead of schedule; to meet in September. The decision was made when oil was trending back down toward the high 30s. Upon the announcement, oil steadied, trending upward, back to about $43. But at the end of the day, I don't see much coming out of the September meeting.

There were a lot of stories about Katie Ledecky this past week (the 2016 Rio Olympics). There were a number of stories on Saudi Arabia's cash crunch. Tesla is considering $40-car-washes while folks stand around waiting for their cars to be recharged: a 30-minute re-charge, and imagine if there are two cars in front of you.

Fracking
Best link for the month: fracking pollution story retracted
Powerful forces still trying to ban fracking in the US

Miscellaneous
IEA says "balancing" has already begun; most doubt this
Atmospheric CO2 declines month-over-month
Oil firms don't have much cash for acquisitions, but SM Energy bought Midland Basin firm for $1 billion
Posted by Bruce Oksol at 8:27 AM No comments: Links to this post