Here's another reason why I love to blog. Through a bit of serendipity I "discovered" Stickley furniture a few months ago. It was love at first sight for many reasons, many of them purely emotional. Mark, over at Stacey Furniture, here in Grapevine, mentioned the "Onondaga" finish, which, of course, meant nothing to me. I thought it a peculiar word but failed to explore its origin or meaning. The word stuck in the back of my mind.

Fast forward to yesterday. While updating an earlier post for "Top Stories" of the week, I happened to come across the Onondaga formation in northeast United States. It was this Ohio Oil & Gas Journal link, on a graphic of the stratigraphy of Pennsylvania and West Virginia: think Burket/Geneseo, Marcellus, and Utica. 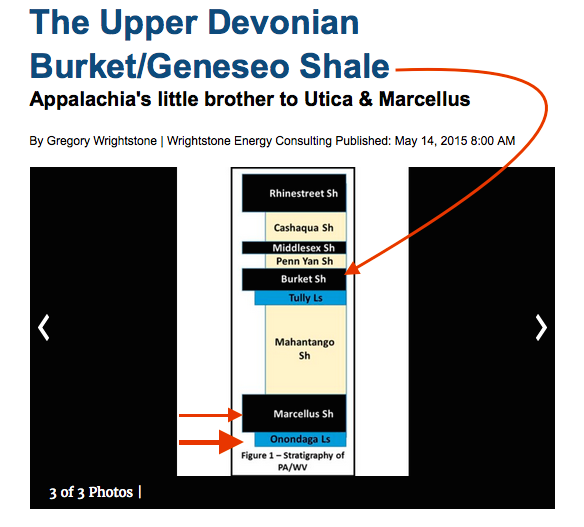 Now, back to the "Onondaga" Stickley furniture finish (say that quickly five times).  From that webite: Gustav Stickley is credited with creating Mission Furniture as a unified style, but he and his four brothers were all active in producing Arts & Crafts and Mission furniture under various trade names and different partnerships over the years. The five Stickley bros were all born in Wisconsin but they settled in upstate New York and Grand Rapids.

Leopold Stickley, according to the linked site, helped his brother Gustav as foreman in the first years, but in 1902 he formed the Onondaga Shops in Fayetteville, NY, with brother John George. At the link, there are dots connecting Stickley with Frank Lloyd Wright (1867 - 1959) in Chicago.

Leopold and John George were the most successful of the brothers in marketing; the Onondaga shops eventually became "Stickley." Their operation endures; they are still located in Manlius, NY, about four miles from Fayetteville, where they make a reissued line of original Stickley Mission Furniture.

Wow, what a digression. So, what is the origin of Onondaga? From wiki:


The Onondaga (Onöñda’gega’ or "Hill Place") people are one of the original five constituent nations of the Iroquois (Haudenosaunee) Confederacy in northeast North America.

Their traditional homeland is in and around present-day Onondaga County, New York, south of Lake Ontario. They are known as Gana’dagwëni:io’geh to the other Iroquois tribes.

Being centrally located, they are considered the "Keepers of the Fire" (Kayečisnakwe’nì·yu’in Tuscarora) in the figurative longhouse that shelters the Five Nations.

The Cayuga and Seneca have territory to their west and the Oneida and Mohawk to their east. For this reason, the League of the Iroquois historically at the Iroquois government's capital at Onondaga, as the traditional chiefs do today.

So, there you have it. For what it's worth.

Don sent me this link. I've been looking for a better weather channel -- for bicyclists in north Texas such sites are very very important.

Link here to The [London] Telegraph (if the link is broken: World Gin Day). And to think I almost missed it.

For my dinner tonight, I had a "fish" buffet: rainbow trout, tilapia, and scallop. Three vegetables: artichoke, asparagus, and broccoli. Rice.

The trout was relatively small, and it was in the oven for a few minutes longer than the recipe called for, but it still turned out perfectly, which tells me that trout is fairly "flexible."

I almost forgot the tilapia; I noted it when I went to the refrigerator something else. A four-ounce slice of tilapia was quickly added to the buffet; almost no effort. Amazing how much can be written in recipes about tilapia, for something so simple.

The little "sprigs" on the trout: thyme. 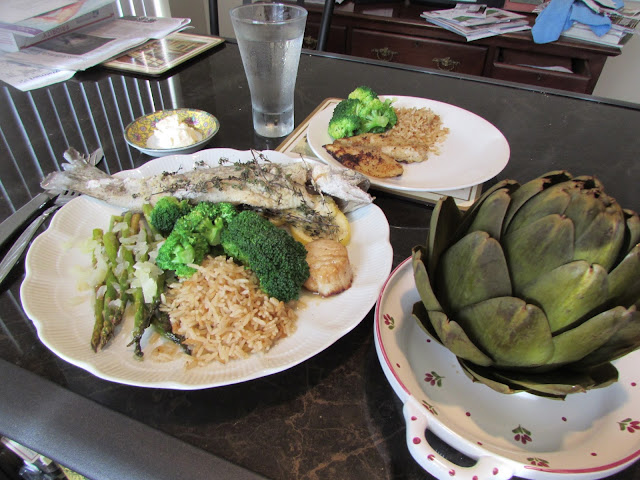 I'm back in my Birdman phase. The first scene in which Mike (Ed Norton) appears "makes the movie." I could watch it over and over.
Posted by Bruce Oksol at 10:00 AM No comments:


The more than yearlong slump in prices for raw materials used in construction hasn’t been of much benefit for U.S. builders.

The prices of many key ingredients for construction have dropped dramatically over the past year and a half, as falling global demand for commodities has led to steep declines in the cost of asphalt, iron, steel and diesel.

But persistent worker shortages have continued to drive up labor costs for the construction industry, offsetting any savings on materials.

And yet, projects keep moving along.


Original Post
This has nothing to do with the Bakken. If you came here looking for the Bakken, scroll down or check out the sidebar at the right.

I spent the past week driving our two older granddaughters back and forth to "computer coding camp" at the University of Texas -- Dallas. It is impossible to describe the amount of federal, state, and private highway construction in north Texas. One can only imagine the number of new jobs this is creating.

In addition, it appears every undeveloped acre in the arc swinging from Trophy Club (northwest of DFW) to Plano (northeast of DFW) is showing activity. Everywhere orange netting has been placed to show which trees are not to be cut down; earth is being moved by everything from huge CATs to small Bobcats; pre-fab cement walls are being held up by flying buttresses; and, weekly updates in the local newspapers telling us about recently opened operations.

Everything I'm seeing does not jibe with this employment report for May in which the US government says only 38,000 new jobs were added. I would bet there were that many new jobs added in north Texas alone as the spring/summer construction season got into full swing.

If the economy is doing so incredibly well here in north Texas, and I think, for the most part, in much of the rest of the US -- the GDP Now forecast suggests a growth rate of 2.5% for 2Q16 -- which, although not great, is not shabby.

So, how does one explain a booming economy -- at least in some parts of the country -- and a US jobs report suggesting only 38,000 jobs were added in the month of May (for newbies: a minimum of 200,000 jobs is required to suggest economic growth)?

It's called an underground economy. A couple of dots to connect. The reports are pretty consistent that undocumented men, women, and children are streaming across the border.  On the other hand, we are not seeing reports of local communities collapsing under demands for homeless shelters for these MWCSOTB. I suppose the US government provides support for many of them, but certainly not to extent that would be needed when they first get here. My hunch is that contractors, landscapers, fast-food restaurants, mom-and-pop retail are hiring folks "off the books" to a far greater extent than we are being told.

I have no idea. I have nothing to back that up. But it's what I would say if sitting in the Daily Addiction Coffeeshop in Williston and someone asked. I'm probably wrong.

But what I'm seeing here in north Texas does not jibe with news reports about hiring.
Posted by Bruce Oksol at 9:32 AM No comments:

Big news of the week:
The big news in the Bakken follows.

Operations
Harold Hamm says he is increasing fracking operations with oil at the $50 mark
The week ends on a positive note: active rigs back up to 28 (big whoop)
Some folks are already worried about a shortage of workers for the next Bakken boom
Hess has permits for a new 5-well Grimestad pad
Oasis, 8; Whiting, 1; EOG, 16

Fracking
Presentation on fracture flooding the Bakken
The halo effect; and, here

EOR
RBN Energy provided an update of EOR in the Bakken

Bakken economy
Williston City wins first of many court cases regarding man-camps
Vultures circling the Bakken; and, here
Posted by Bruce Oksol at 9:06 AM No comments:

First off, I would like to publicly thank the reader who sent me a note thanking me for posting the video and reminding all of us that "Apache" was simply the best instrumental ever.

Another writer alerted me to the fact that the USGS just released a survey that increased its estimate of technically-recoverable natural gas in the Piceance Basin by 40x, from 1.5 trillion cubic feet to 66 trillion cubic feet. That's technically recoverable, and does not include significant NGLs and crude oil. It gave me an opportunity to update the far larger three-stacked play in the northeast: the Burket/Geneseo - Marcellus - Utica.

SeekingAlpha repeats the USGS claim that the Piceance is second only to the Marcellus. LOL. The Utica dwarfs them all based on a university study -- which by the way, reminds me of Harold Hamm's/Leigh Price's estimate of the Bakken decades before the USGS finally updated the Bakken/Three Forks play.

For newbies,
The "trillion-barrel reservoir" was subsequently scaled back to 500 billion bbls but it certainly got our attention at the time.

It's unlikely we will see the Piceance developed to any great extent in our investing lifetimes: a) the infrastructure is not there, compared to what is already in place elsewhere (Pennsylvania, Texas); b) it is far from urban centers and refineries in the US (unlike the Marcellus/Utica and the Eagle Ford/Permian); c) much of it is controlled by President Obama, and probably eventually Hillary Clinton (the assets sit under BLM land); and, d) Colorado has more than its share of CAVE dwellers.

The bottom line: China and India have no worries about the earth running out of fossil energy.

Another huge thank you to another reader who has sent me numerous links including one from Bloomberg I have yet to post: "Shale King returns to fracking wells after oil rallies to $50." The "king" is Harold Hamm, of course. I'm going to have to pull out the book on fracking a reader sent me, but it's beginning to look like with the death of Aubrey McClendon and the retirement of Mark Papa some years ago Harold Hamm may earn the title of "last man standing." I need to come up with a fourth -- I'm sure readers will provide suggestions.

But I digress. Baker Hughes does us a service by providing an active rig count every week. That rig count is helpful. However, for those of us following tight oil in the US it would be nice for someone to start tracking DUCs and completed-DUCs, or level of fracking.

The number of active rigs provides an indication of the level of activity in the oil patch but provides little, real helpful information on production.

To the best of my knowledge the only state providing daily DUC data is the state of North Dakota,a  and then a monthly report. I am unaware of any other state providing that data.

So, there you have it. Some Saturday morning meanderings to get me started.


From wiki:
A French composer, Jean Ledrut, accused Joe Meek of plagiarism, claiming that the tune of "Telstar" had been copied from "La Marche d'Austerlitz", a piece from a score that Ledrut had written for the 1960 film Austerlitz. This led to a lawsuit that prevented Meek from receiving royalties from the record during his lifetime, and the issue was not resolved in Meek's favour until three weeks after his suicide in 1967. Austerlitz was not released in the UK until 1965, and Meek was unaware of the film when the lawsuit was filed in March 1963.
Posted by Bruce Oksol at 8:29 AM No comments: