Abengoa has been previously linked at these posts:
The Solyndra list of 39 solar scams supported by Sasha's father.

WND is now reporting that Abengoa, a solar-energy company in which the Obama administration "invested" billions has failed.

The collapse of a Spanish-based multinational renewable energies company could cause election-year embarrassment not only to President Obama, Hillary Clinton, the Clinton Foundation and the Democratic Party, but also to Republican presidential candidate Ted Cruz and his wife Heidi, through their ties to Goldman Sachs. [I doubt anyone will be "embarrassed."]

Announced Tuesday, Seville-headquartered renewables multinational firm Abengoa plans to sell off four solar photovoltaic power plants in Spain for a collective value of $65.13 million, $57.26 million and a net cash flow of $13.9 million, helping the company meet its debt-restructuring targets set out in its feasibility plan.

The asset sale announced Tuesday comes after the company sold in February its 20 percent share in the 100MV Shams-1 concentrated solar power plant in the United Arab Emirates to the Abu Dhabi-based renewable energy company Masdar.

The Abengoa selloff, which has included selling the company’s office headquarters in Madrid, is part of a non-strategic divestment plan announced after the company went into bankruptcy in November. The move is designed to reap approximately $112 million in operating cash to stay in business until December.

The bankruptcy, the largest in Spain’s history, was triggered after Gonvarri, an arm of Spain’s industrial group Gestamp, decided in November 2015 against a plan to invest $371 million into the company.

Last November, after the Abengoa bankruptcy was announced, the company’s bonds were “virtually worthless,” as its share price plummeted 54 percent in a single day.


Abengoa was a renewable energy company that scripted perfectly the Obama administration’s shift from carbon-based fuel, providing a European counterpart to the U.S.-based Solyndra.

Solyndra was earmarked for funding in the Obama “economic recovery” stimulus efforts that began in 2008 at the end of the George W. Bush administration after the bank failures and economic downturn occasioned by the collapse of the subprime mortgage market.

Last November, Abengoa had received at least $2.7 billion in federal loan guarantees since 2010 to build several large-scale solar power projects in the United States. There was no certainty any of the government loans would be paid back amid a collapse that dwarfed the $530 million loss to the U.S. taxpayer with the collapse of Solyndra in 2011.

It was about two years ago when Bloomberg had an article suggesting that Europe was turning back to coal instead of natural gas.

Bloomberg is reporting: Europe is turning to coal -- instead of natural gas --

Natural gas-fired power plants accounting for almost 30 percent of Europe’s capacity are at risk of shutting or being mothballed as utilities opt to burn cheaper coal, according to the International Center for Natural Gas Information.

At that same post, it was noted that Spain was turning away from solar energy:

Oh, before we get started, a reminder: the unemployment rate in Spain is 26%. CNBC calls a rate of 26% "massive." I would tend to agree.

For a company focused on green energy, it's surprising to see that it just signed with Cheniere for a 20-year supply of LNG for its customer base in the UK and Spain. [It was interesting to note that this was not only for Spain, but also for the UK. Remember, it is expected that the UK will run out of its own natural gas within three years.] FuelFix is reporting:


A Cheniere Energy subsidiary has agreed to a 20-year deal worth $5.6 billion to supply liquefied natural gas to Spanish power and generation company Iberdola.

One Picture Is Worth A Thousand Words; Just How Incredible Is The Bakken? Re-Visiting The Red Queen -- April 16, 2016 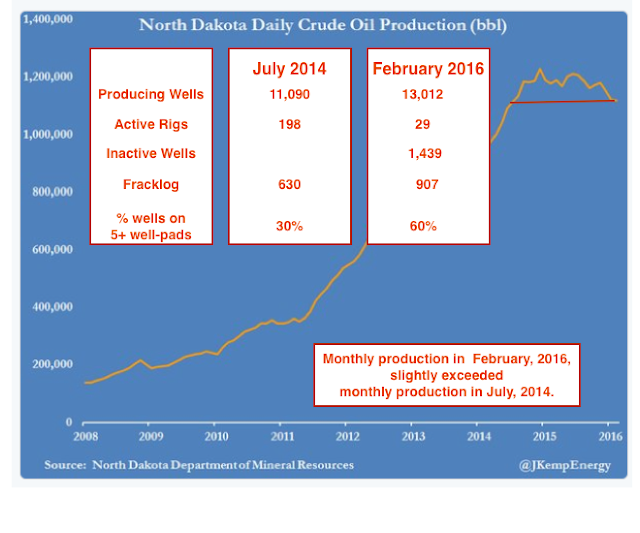 If "they" are not drilling (only 29 rigs vs 200 during the boom) and they are not fracking in North Dakota, what are "they" doing? Compare with number of rigs on the Arabian peninsula. Rising exponentially.

Wells in the Bakken are being shut-in for weeks and months at a time.

Even producing wells are being taken off-line for days and weeks at a time; production is being managed.

There are estimated to be at least (in round numbers) fifteen hundred (1500) inactive wells. They can be back on-line in less than a week.

There are almost 1,000 DUCs. It takes three days to frack a well. Once fracked, moments later, the "new" oil is in the national pipeline system.

The February, 2016, production data is "preliminary." We won't know "final, revised data until next month, but if the final, revised production increases by just 4,250 bopd, North Dakota's daily production month-over-month will have increased.

Just how incredible is the Bakken? Pert near pretty incredible.

Again, if "they" are not drilling, and they are not fracking, what are "they" doing? At least one operator has said "they" can make money on $25-oil in the Bakken. My hunch is some "new" operators (buying stressed property at fire-sale prices) can make money on $10 oil. They're not fracking and they aren't drilling. The aren't building new pads. They aren't building new roads to the pads. They aren't signing huge lease checks.

Rhetorical questions and comments.
Posted by Bruce Oksol at 6:29 PM No comments:

Note: my thoughts on the upcoming Doha meeting tomorrow at this link.

This is really pretty cool. The other day I wrote:


Earlier today it was reported that OPEC forcast non-OPEC production falling faster than predicted, from 700,000 bopd to 730,000 bopd or about a 0.03 percent change. LOL.

As soon as I read that, I knew that the price of oil rests on the Chinese and the Indian economy. Right on cue, Bloomberg/Rigzone report: China’s crude imports climbed to a record in the first quarter as higher refining margin encouraged refiners to boost purchases.

A reader sent me this link from The Telegraph: soaring Chinese crude oil demand is saving OPEC's butt.


A dramatic build-up in China’s strategic petroleum reserve and surging demand for imported crude oil are likely to transform the global energy markets this year, regardless of any production freeze agreed by OPEC and Russia this weekend.

Chinese credit stimulus and a 20 percent rise in public spending has set off a fresh mini-cycle of growth that is already sucking in oil imports at a much faster pace than expected.

Barclays estimates that the country will import an average of 8 million barrels per day this year, a huge jump from 6.7 million bopdlast year. This is arguably enough to soak up a big chunk of the excess supply currently flooding global markets.

Standard Chartered said Chinese imports could reach 10 million bopd by the end on 2018, implying a supply crunch and a fresh spike in oil prices as the market is turned on its head.

Energy consultancy Wood Mackenzie says $400 billion in oil and gas projects have been shelved [worldwide] since the onset of the commodity slump. A great number of depleting fields will not be replaced.

Feifei Li, Barclay’s oil analyst, said China is in a rush to fill four new storage sites of its petroleum reserve coming available this year. “It is an urgent priority of the government to fill up the tanks while the price of oil is cheap,” he said.

Fresh storage is likely to average 250,000 bopd, five times the level last year. The pace will rise further in the second half of the year.

China is building vast underground rock caverns in the interior of the country as a top national security priority, fully aware of the way Japan was squeezed by the US fuel embargo in the late 1930s. It aims to boost reserves to 550 million barrels and ensure a 90-day buffer to resist an external supply shock.

China’s own output of oil has fallen by 200,000 bopd over the last year as PetroChina and Sinopec slash investment, while demand has continued to grow.

So much more at the article. Worth archiving.


A slow-moving, strengthening storm will cause snowfall to ramp up over a large part of the Rockies and to spread over part of the High Plains this weekend.

People in the region, including the Denver area, should be prepared for travel disruptions, power outages and property damage.

Earlier I posted an update regarding the top 18 oil-producing fields in North Dakota, most of them were the Bakken. I said there were likely to be factual and typographical errors. I've gone through the list again; this is the most recent iteration. Same disclaimer holds.


The following spreadsheet is ordered on the basis of the production / well / for the month of February. The last column in each 4-column series refers to total monthly production from the particular field, not the production average from each well in that field.

Empty fields simply mean that I did not fill these fields in earlier and I'm too lazy to update them now.

If one had the time and interest, it might be interesting to compare this data with the "heat field map of the Bakken" which is my #1 post for "hits."