Update On The Bakken Economy From The Williston Wire -- March 25, 2016

Notes from The Williston Wire:


Don and Kay Garbel, owners of Garbel's Furniture and Flooring, Crosby, are preparing to open a second furniture store in Kenmare's West Side Stores. "It's kind of exciting," said Don, but at the same time, a little overwhelming. Opening a second furniture store in the midst of a regional economic downturn may seem just as counter intuitive, but it actually makes a lot of sense, said Kay. "Kenmare is a community a lot like Crosby. It's a similar size -- a similar space. It just feels like a good fit," she said.

The US Postal Service in Tioga is moving to an "updated, modern facility," planning to move to the location of Hegstad Furniture.

A new bakery, Simply Scrumptious Bakery, opened in Sidney, MT, recently.
Posted by Bruce Oksol at 6:24 PM No comments: Links to this post

From The Williston Wire:


Williston has earned the fastest growing micropolitan title for the fifth year in a row.

The U.S. Census Bureau released its population estimates this week for the year between July 1, 2014 to July 1, 2015.

Williston was ranked second to Bozeman in number of people gained: Bozeman gained 3,500 compared to Williston's 3,200.

The link takes you to the same link posted earlier: http://www.census.gov/newsroom/press-releases/2016/cb16-43.html.

The graphic below, from Business Insider: 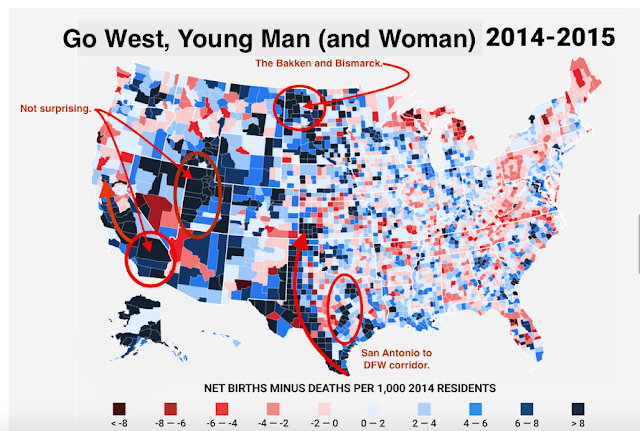 Posted by Bruce Oksol at 1:26 PM No comments: Links to this post

Pretty remarkable: over four million bbls of petroleum products exported every day from the US.

Hurrah! I've finished Doctor Zhivago. The book and the movie are quite different: the book was written for Russian readers; the screenplay was written with Americans viewers in mind. Apparently the end of the book left many Americans confused; Shmoop delves into that. In just a few paragraphs Shmoop explains something important about Russian novels.

These were my immediate thoughts upon completing the novel:
This is the first "Russian novel" I have read. I doubt I will read others, but I will re-read this one again.
Posted by Bruce Oksol at 10:35 AM No comments: Links to this post

Nothing About The Bakken This Good Friday Morning -- March 25, 2016

First the US economy. Hey, it's doing great. All that talk about a recession -- yes, it's still there -- but we still need that first quarter of negative growth. Having another month to massage the data, the Obama administration was able to find a way to revise the final 4Q15 GDP number to 1.4%:

The third and final estimate of gross-domestic-product growth for the fourth quarter was 1.4%.
This was higher than the 1% annualized pace that was reported in the second estimate and that was expected by economists.

The report showed that consumer spending continued to propel the economy, while exports and local government spending fell.

Yes, propel. Not exactly the word I would have used.

An interview with the CEO of Carl's Jr:


'We're not the brand for people who eat nuts and bark," CKE Restaurants CEO Andy Puzder, tells me without apology. "Hell, I'll walk into one of our stores to get a barbecue chicken sandwich and walk out with a Western bacon cheeseburger. You smell them, and you just get hungry. We're the 'young, hungry guy' brand."

Even those who have never frequented one of Mr. Puzder's fast-food restaurants—known as Carl's Jr. west of the Rocky Mountains, and as Hardee's in the Eastern U.S.—will be familiar with his dude-centric brand. How could anyone forget their Super Bowl ads?

This year's featured 21-year-old Danish swimsuit model Nina Agdal fondling a fish sandwich on a beach in Maui. In last year's 1950s throwback ad, blonde bombshell Kate Upton gorged on a Southwest jalapeno patty melt at a drive-in as she stripped to the tune of "Some Like It Hot." For the record, Mr. Puzder says he doesn't attend his company's ad shoots: "I have a very good marriage. And I want to keep it preserved."

The demographic targeted by the ads does not include the CKE chief executive. But as Mr. Puzder, a fit and trim father of six, with six grandchildren and a seventh on the way, tells me in a recent visit to the Journal's offices, "I'm 62. I want to be a young, hungry guy."

The robust marketing has helped revive a company that a decade ago was still suffering a $700 million debt hangover after purchasing Hardee's in 1997. Since Mr. Puzder took charge in 2000, CKE has grown consistently. Revenues have increased by 3.6% over the past year to about $1.3 billion, and its international restaurant count has grown by more than 15% annually over the past three years.

Mr. Puzder is quick to point out that many of his competitors aren't doing as well and the U.S. economy remains underpowered.

And it only gets better after that.


So why the increased use of technology? The major reason is consumer preference. Research shows that many appreciate the speed, order accuracy, and convenience of touch screens. This is particularly so among millennials who already do so much on smartphones and tablets. I’ve watched people—young and old—waiting in line to use the touch screens while employees stand idle at the counter.

The other reason is costs. While the technology is becoming much cheaper, government mandates have been making labor much more expensive.

In 2015, 14 cities and states approved $15 minimum wages—double the current federal minimum. Additionally, four states, 20 cities and one county now have mandatory paid-sick-leave laws generally requiring a paid week of time off each year per covered employee. And then there’s the Affordable Care Act, which further raises employer costs.

Dramatic increases in labor costs have a significant effect on the restaurant industry, where profit margins are pennies on the dollar and labor makes up about a third of total expenses. As a result, restaurants are looking to reduce costs while maintaining service and food quality.

Highly automated models have limited applicability for restaurants with more complex menus. For example, at CKE Restaurants, the company I lead, our Carl’s Jr. and Hardee’s employees make biscuits from scratch. They bread chicken tenders by hand, prepare complex burger orders, hand-scoop the ice cream for milkshakes, and the restaurants offer table service. None of these tasks can be effectively automated, and we wouldn’t want them to be.

I've always wondered by McDonald's has not gone to automatic ordering across the US. Yes, I know there are some McDonald's with automatic ordering -- or at least there were several years ago when I was still flying through various national airports -- but for the most part I have not seen them. I assume it's the upfront cost. And one wonders exactly how many employees an automatic system would actually replace. At McDonald's, I don't think very many, if any.

My hunch is that there are too many McDonald's customers who would be confused by the technology, mis-order at the kiosk, and then complain about their order when they went to pick it up.

The CKE/CEO says the main reason for automatic ordering is because customers like it:


The major reason is consumer preference. Research shows that many appreciate the speed, order accuracy, and convenience of touch screens. This is particularly so among millennials who already do so much on smartphones and tablets. I’ve watched people—young and old—waiting in line to use the touch screens while employees stand idle at the counter.

Two comments:
If a 90-second wait for your McDonald's meal is too long, you live in a very different world than I live in.

For those who can't get enough of my posts on Carl's Jr -- all three of you -- here are links to past posts:
I'm heading out; it's almost noon. The nearest Carl's Jr is almost 20 miles away, so I will bike to Whataburger down the street.
Posted by Bruce Oksol at 10:12 AM No comments: Links to this post