This Is Why The November, 2016, Election Is Important -- The Next Supreme Court Justice Likely To Tip Balance -- February 9, 2016


The U.S. Supreme Court on Tuesday delivered a major blow to President Barack Obama by blocking federal regulations to curb carbon dioxide emissions from power plants, the centerpiece of his administration's strategy to combat climate change.

On a 5-4 vote, the court granted a request made by 27 states and various companies and business groups to block the administration's Clean Power Plan. The move means the regulations will not be in effect while litigation continues over whether their legality.

The brief order from the justices said that the regulations would be on hold until the legal challenge is completed. The court's five conservatives all voted to block the rule. The order noted that the four liberals would have denied the application.

Are they liberals or progressives? I'm used to seeing them referred to as progressives. Whatever.

Depending upon the outcome of the November, 2016, election, I assume it's very possible the court won't have to rule on this issue. The appeals court still needs to rule, regardless.

After eight years of the North Dakota Bakken boom, and billions of dollars spent in the local area, the south end of Main Street in Williston, North Dakota, hasn't changed all that much since I graduated from Williston High School:

In a long note like this, there will be typographical and factual errors. If this information is important to you, go to the source. To the best of my knowledge, the video is of the wells listed below. I do not plan to update this page. The wells will be updated at the Truax oil field oil page.

Video of well pad in the Truax oil field, 7-154-98:
Farther in the distance:
At the beginning of the video:
Another short video taken from the same location:


About Twelve Miles East Of Williston, Just North of State Highway 1804
Posted by Bruce Oksol at 8:34 PM No comments:


TSLA: for 3Q15 -- forecast a loss of 50 cents; AP story here; loss at 58 cents is bigger than expected; but deliveries better than expected and TSLA surges 7% in after-hours trading;

The Red Queen Refuses To Get Off The Treadmill; Saudi Can't Push Her Off -- February 9, 2016

February 11, 2016: see IEA tweet below. Now EIA is reporting: initial production rates in tight oil formations continue to rise. At the link, one can toggle among the various shale plays. This is a screen shot of the Bakken play: 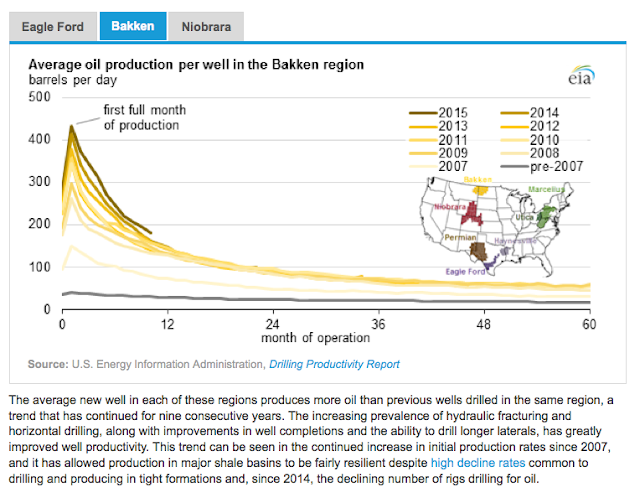 Regular readers are aware of this and understood what is going on in the Bakken.

What we will be talking about Wednesday: Biden and Bloomberg. What will happen: Bloomberg jumps in before end of February.