The Coastal GasLink project has now secured 11 project agreements and continues to make “good progress” toward concluding deals with other First Nations along the pipeline route, TransCanada said.

Coastal GasLink is proposing to construct and operate a 670-km natural gas pipeline from the Groundbirch area near Dawson Creek, BC, to the proposed LNG Canada LNG export facility near Kitimat, BC.

The project is a key component of TransCanada’s capital growth plan, which includes more than $13 billion in proposed gas pipeline projects.

A "key component" and a big, big deal.

Spread Between Low- And High-Sulfur VGO Is At Widest Point In More Than Six Months -- January 20, 2016


The spread between low- and high-sulfur VGO barges in the US Gulf Coast cash market stood Wednesday at its widest point in more than six months as cargoes of the more sour product from Northwest Europe, Scandinavia and the Baltic states head for US shores.

The spread of $2.85 is the widest since low-sulfur VGO was also $2.85 over the sour product July 8. It points to the balance of product recently shipped from Europe tilting toward higher-sulfur VGO. About 10 VGO cargoes have been dispatched to the Gulf and West Coast markets in recent weeks from European ports, and market sources said one cargo of VGO from Colombia also is expected in the Gulf Coast early next month.

"There is no doubt at the moment that there are too many cargoes either in the USG or on the way there for the market to absorb," a European feedstocks trader said Wednesday.
High-sulfur VGO is fed into a refinery hydrocracker to make gasoline and diesel, while low-sulfur VGO goes into a fluid catalytic cracker to produce naphtha for reforming into gasoline, according to energy consultant RBN Energy.

Early Wednesday, high-sulfur VGO was heard traded at March cash WTI plus $3/b, the equivalent of February cash WTI plus $4.10/b and suggesting further weakness in sour product. No trades were heard in low-sulfur VGO, implying that the $2.85 spread is unchanged.

The Wednesday trade was for part of a VGO cargo aboard the Mare Pacific and chartered by Glencore, a US feedstocks source and a second Europe feedstocks source said. That ship was north of Havana, Cuba, late Wednesday morning and bound for the Port of South Louisiana at Lapace, Louisiana, according to Platts cFlow trade software. A Glencore trader did not immediately return a message left Wednesday morning about the Mare Pacific, which sailed from Estonia last month.

The VGO aboard the Mare Pacific had been offered at the equivalent of February crude plus $4.85/b earlier this week.

Rising Gulf Coast cracks in gasoline and diesel were not enough to lift high-sulfur VGO. The crack for a barrel of 87-unleaded against a barrel of region-dominant Louisiana Light Sweet crude rose $1.67/b to $11.60/b Tuesday. The diesel crack rose 12 points to $6.79/b. NYMEX futures in both products were weaker Wednesday morning, however.

VGO markets have lost support with VGO-consuming units offline at two of the nation's 10 largest refineries, both in Texas. The ultracracker at the 451,000 b/d Marathon Galveston Bay refinery is expected to be unavailable until March 1, and the VGO hydrotreater at the 340,000 b/d Shell-operated refinery at Deer Park, Texas, will be down until mid-February.

A couple of years ago RBN Energy had a post on VGO (vacuum oil gas): When VGO is traded the sulfur content is also important since lower sulfur VGO (0.5% or less sulfur) is more valuable than 2% high sulfur VGO.
Posted by Bruce Oksol at 11:03 PM No comments:

According to PennEnergy, the state with the lowest average price of gasoline is Oklahoma, at $1.57/gallon.

#57: California, at $2.74/gallon. I don't think Californians have seen it so low in the last four decades.

The Wall Street Journal posted this two days ago:

This spring . . . the Paris-based International Energy Agency (IEA) of the Organization for Economic Cooperation and Development (OECD) reported for the first time that the peak of world oil production is in sight.

Even taking into account the best efforts of the explorationists and the discovery of new fields in frontier areas like the Caspian Sea . . . sometime between 2010 and 2020 the gush of oil from wells around the world will peak at 80 million barrels per day, then begin a steady, inevitable decline, the report says.

The same scientists who predicted "Peak Oil" back in 1998 knew they would soon be out of a job, and moved on. They are now predicting future global temperatures.

"It's tough to make predictions, especially about the future."

Twenty (20) permits canceled, including:
Only one (1) producing well completed:

For those who have been wondering, "that ship" arrived exactly as scheduled: today, January 20th. Seeking Alpha is reporting:
For background to this story, see this link.

This trainwreck is tracked over at "Doomsday: US Health Care." A reminder for newbies: "train wreck" as a synonym / euphemism for ObamaCare was coined by a prominent Democrat who championed the program. He later announced he would not run for re-election. Out of respect for his family, I won't repeat his name now.


UnitedHealth (UNH), which is weighing an exit from the Obamacare exchanges, reported it lost about $475 million on Obamacare-compliant plans in 2015 and expects to lose more than $500 million this year.

The insurer, the parent company of United Healthcare, ended last year with about 500,000 enrollees in Obamacare exchange plans.

It expects that number to grow towards 800,000 during the 2016 open enrollment period, which ends January 31, 2016,, before dropping again as some members get jobs, stop paying premiums or find insurance elsewhere.

(Also in 2015, it had about 150,000 enrollees who signed up outside the exchanges for individual policies that are compliant with Obamacare.)

This story will get wide exposure and much more in-depth analysis. UnitedHealth is not unique; the other insurers will see the same problem. We've discussed ad nauseum the reasons for this; not going to go through it again.


UnitedHealth, which sat out the first year of Obamacare in 2014, said it is not looking to grow its exchange business. Instead, it has increased prices, eliminated marketing and commissions and withdrawn its top-tier products. In an effort to stem the losses, it is also working more closely with providers and enrollees to manage their illnesses and care.

UnitedHealth warned in November that it might pull out of the Obamacare exchanges altogether in 2017, citing higher-than-expected claims. In particular, it blamed the large number of members signing up outside the open enrollment period who were using a lot of medical services.

Some insurers argue that Americans are waiting until they get sick to sign up and then finding a way to qualify during the so-called special enrollment period, which is traditionally open to those who change jobs, get married or divorced or have a baby. The Obama administration has since said it would tighten the rules for joining Obamacare during this period.

Because of this, it was reported that President Obama stepped in and did what the health insurers asked: no more late enrollments. The story is at USA Today but is being widely reported.


Bowing to pressure from insurers, federal officials on Tuesday tightened the conditions under which people can sign up for plans on the HealthCare.gov exchange outside open enrollment.

The move by the Centers for Medicare and Medicaid Services comes after complaints by health insurers that it was too easy for people to wait until they were sick to sign up and to drop coverage after they got treatment.

Earlier Tuesday, UnitedHealth announced a 19% drop in profit and downgraded its earnings forecast citing concerns about its Obamacare enrollment and the flexibility people had to change insurance plans.

CMS announced it would eliminate six more "special enrollment period" categories, a month after dropping the one that allowed people to enroll late if they became surprised by the penalty they face for not having insurance at tax time. This year, special periods will not be allowed for people, including non-citizens who had errors in their premium tax credits and others who weren't aware of mistakes or eligibility.

"Six more special enrollment period categories..." --- incredible -- just how many special categories were there? What a trainwreck.
Posted by Bruce Oksol at 9:10 AM No comments:

Disclaimer: I do not have any background or formal training in the oil and gas industry. I may be misreading things in the file report. In a long note, there will be factual and typographical errors. Do not make any decisions based on this information. If this information is important to you, go to the source.

Did you all notice this?
Permit application:
From the geologist's narrative, some data points:
Location of this Three Forks second bench well: 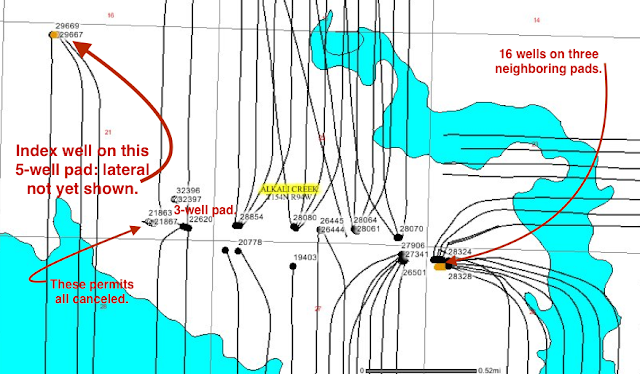 For newbies: just prior to the slump in oil prices, operators had pretty much identified, mapped, and "understood" the middle Bakken. They were just getting started on the upper bench, Three Forks, and had made minimal headway in the lower benches. There are only a handful of lower bench Three Forks wells. CLR generally drills long laterals; it is interesting this is a short lateral. At 15 stages, 3 million lbs sand/ceramic, it seems about average for a completion.
Posted by Bruce Oksol at 8:45 AM No comments:

Breaking news:Venezuela requests OPEC hold an emergency meeting to discuss steps to prop up oil prices, which have fallen to their lowest since 2003, sources say - Reuters. This is hardly "news." Venezuela has been asking for "emergency meetings" for quite some time now, and has been under duress for at least a year. 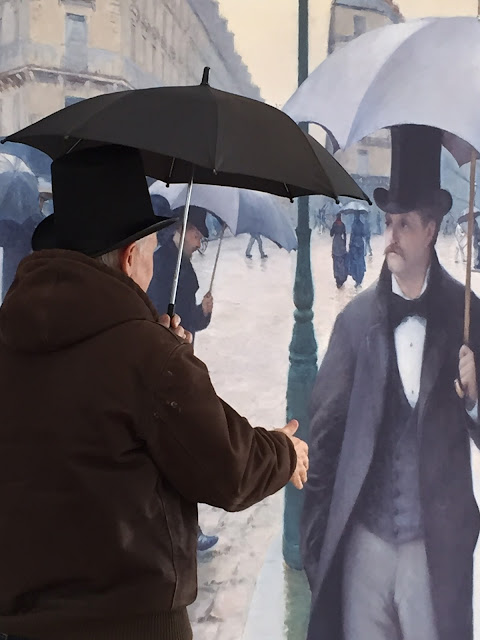 Caillebotte.
Posted by Bruce Oksol at 8:01 AM No comments:


North Dakota's oil production has been flat for more than a year, but it hasn't fallen despite the sharp drop in prices, illustrating the challenges of rebalancing the oil market.

Output first hit this level September 2014 and has been essentially unchanged for the last 15 months, the longest and deepest pause in growth since the shale boom began.

The reduction in actual output of around 450,000 bpd compared with the previous trend is a measure of how far lower oil prices have already gone towards rebalancing the market. But most analysts and forecasters expected the state's crude output to have fallen sharply by now rather than just to have levelled off.

Shale production was supposed to respond much faster to declining prices because it required the drilling of a large number of new wells to offset rapid decline rates from old ones. Instead, shale output has proved unexpectedly resilient, as producers have found ways to maintain output while slashing drilling and costs.

Best story of the day from The Wall Street Journal: where America's millionaires live. Although the story is about a city on the east coast, the last paragraph:


Among states, North Dakota recorded the fastest growth in millionaires in June 2015 from a year earlier, increasing more than 10%.

In other news we wake up to this:

RBN Energy: the future of master limited partnerships.
Posted by Bruce Oksol at 6:29 AM No comments: