Later, 2:46 p.m. Central Time: a huge "thank you" to a reader. See comments below. It turns out Reuters must have made a mistake posting that "gasoline demand" story. That same link now takes you to this headline:


Oil prices steadied on Tuesday after Kuwait said an output freeze by major oil producers would proceed without Iran, shoring up sentiment ahead of weekly data likely to show another record high in U.S. crude inventories.

Later, 7:56 a.m. Central Time: aha. Now I get it. The EIA data reported this morning by EIA and Reuters was the monthly data. I had been focusing on the weekly data. It now makes sense. I wouldn't give the Reuters article any more thought; time to move on.

Later, 7:14 Central Time: wow! talk about things moving fast. Moments after I posted the note below, I also tweeted the story and the link. I mentioned that John Kemp had not reported on it. Now, less than 30 seconds later, John Kemp has an article on this "supposed" news story: http://www.reuters.com/article/usa-gasoline-kemp-idUKL5N1782SS.

I still have no idea why Reuters is reporting January, 2016, data when data through early March is available and shows something entirely different.

Either Reuters has a) a hidden agenda; b) was trying to explain recent price drop; or, c) simply blew it. [Maybe the EIA data is revised monthly until a final report -- and maybe we finally got the final report -- I don't know.]


Original Post
This was posted by Reuters one hour ago:


Oil slipped to a one-month low on Tuesday after a surprise fall in gasoline demand in the United States, the world's largest oil consumer, and on doubts whether oil producers can agree an output freeze to dampen a global supply glut.

Something doesn't make sense. We have EIA data through early March -- see graph below. Yes, there was a huge drop-off in gasoline demand in January, 2016, but that was quite some time ago. Since then gasoline demand has been surging and is on glide path to set new records. Of course, I haven't seen the most recent data, but yet the Reuters article is referencing January, 2016, data which in this market is "old history."

Also, where did that "for the first time in 14 months" come from? Gasoline demand  fell precipitously about six months earlier than January -- back in August / September (2016) time frame.

In addition, it does not appear that John Kemp has tweeted this "January decline in US gasoline demand" in the past 24 hours -- if that was accurate, John Kemp, I think, would be all over it. I must be missing something.

But again, I must be missing something. The Reuters story is being reported all over the internet.

The most recent EIA gasoline demand data will be released tomorrow, and the graph should be available Thursday. 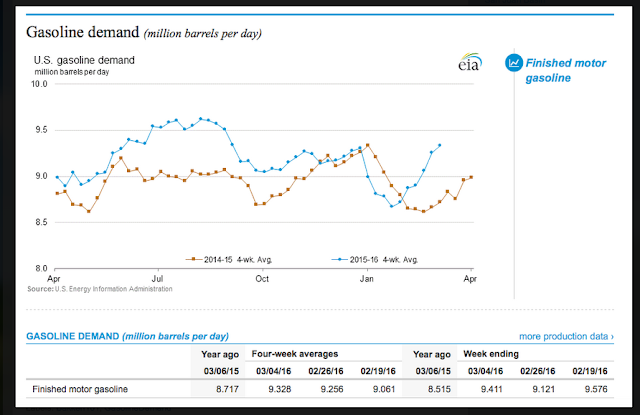 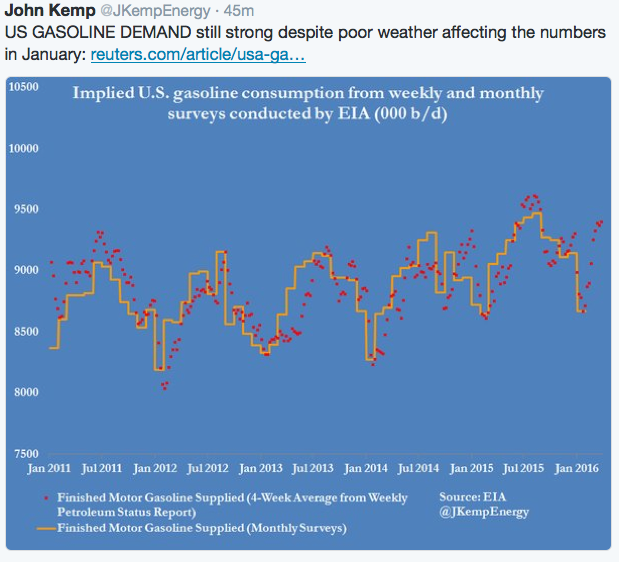