In this section, these four wells: 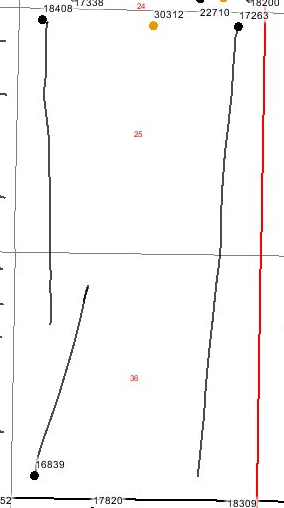 Although some of these are short laterals, they are all 1280-acre spacing:

Tweeting now (this is s a big story):
Posted earlier, from a Bloomberg article:


West Texas Intermediate, the U.S. benchmark crude, settled at $37.50 a barrel Wednesday, 14 cents higher than Brent, the international marker. Brent has been more expensive than WTI for most of the past five years, reaching a premium of $27.88 a barrel in 2011.

Analysts suggest WTI needs to have a $4-premium to make it economical to export (transportation costs), but the Vitol story suggests "maybe not."

I posted that so I could post this, Christmas Eve dinner.

My wife is in California. My charges -- our three granddaughters -- are in Colorado skiing with their parents. I have five glorious days to myself. 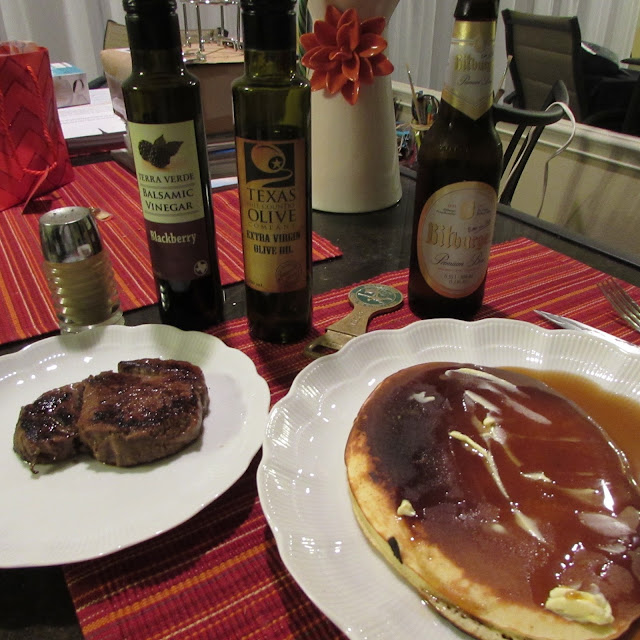 I forgot the broccoli but I will do that tomorrow. The dinner needs a bit of color.
Posted by Bruce Oksol at 7:15 PM No comments:

Email ThisBlogThis!Share to TwitterShare to FacebookShare to Pinterest
Labels: WTI_Brent_Spread

I don't know what to make of the latter (refining throughput) but low oil prices certainly encourage folks to buy it, either for use or storage.

Meanwhile, for OPEC, these two tweets:
Camel hair coats by Ralph Lauren, perhaps? Or how about using the sand for computer chips? That's what they are doing in Arizona.
Pakistan's gasoline demand set for strong growth, imports to rise. Platts reports the story here.


Pakistan's gasoline demand is expected to show strong growth over the next couple of years, forcing the country to boost its imports of the auto fuel.

According to estimates from the petroleum ministry, gasoline demand is expected to grow by 15% year on year to 5.3 million mt (around 39.5 million barrels) in fiscal 2015-2016 (July-June) led by low prices, non-availability of compressed natural gas and a rise in auto sales.

I assume the Pakistanis are not unique in the world, looking to raise their standard of living, buying more trucks, buying nicer cars, and using more gasoline.

Reuters quoted the company’s spokesman as saying that the declaration was because of an “act of sabotage” on the Ogoda-Brass transport line.

Ogoda-Brass and Tebidaba-Brass are the two main onshore pipelines in Bayelsa State operated by ENI’s subsidiary.

Previous sabotage of Ogoda-Brass and Tebidaba-Brass, had led to shut down of production at its Akri and Oshi fields as a precaution.

Also an attack on its Ogoda Manifold-Brass Terminal pipeline at the peak of militancy in the Niger Delta had halted production of around 33,000 barrels of oil and two million cubic metres of gas per day.

Nigeria LNG’s export plant at Bonny Island can produce 22 million metric tonnes of liquefied gas a year and accounts for about eight per cent of global LNG supplies.


The number of Americans filing for unemployment benefits fell more than expected last week, nearing a 42-year low as labor market conditions continued to tighten in a boost to the economy.

Initial claims for state unemployment benefits dropped 5,000 to a seasonally adjusted 267,000 for the week ended Dec.19, not far from levels last seen in late 1973.

Economists polled by Reuters had forecast claims dipping to 270,000 in the latest week. Claims have been below 300,000, a threshold associated with a buoyant labor market, for 42 consecutive weeks. That is the longest stretch since the early 1970s.

However, some of the decline last week could be attributed to difficulties adjusting the figures during the holidays.

The four-week moving average of claims, considered a better measure of labor market trends as it strips out week-to-week volatility, rose 1,750 to 272,500 last week.

Posted by Bruce Oksol at 2:23 PM No comments:

I think the repeal of the ban on crude oil exports is a much bigger story than I originally thought. If nothing else, it completely frees the entrepreneurs to think about "everything" when it comes to supplying the world with energy from the US.

From RBN Energy this morning:


According to outbound commodity data published by the Corpus Christi Port Authority, volumes of crude and condensate shipped out of Corpus averaged 680,000 bopd between January and November 2015.

According to the Corpus Port Authority data, outbound crude and condensate peaked in August 2014 at 757 Mb/d but was still close to 670 Mb/d in November 2015.

The tea leaves suggest Europe is going to be a huge customer for refined products going forward, and possibly even light oil. Remember, it is opined that Europe will be the only continent that will need to import all the hydrocarbon it uses in the not-too-distant future. From an earlier post:


Europe may be the only continent in the world to depend on imported energy -- EU Council President.

Opening the European business summit in Brussels on Wednesday, May 15, 2013, he said, "It's now becoming clear; eventually Europe may well be the only continent in the world to depend on imported energy.

"Already by 2035 our dependence on oil and gas imports will reach more than 80 per cent.

"This will have an impact on the competitiveness of our companies, and of our economy as a whole."

I'm a sucker for travelogues. Earlier this month I was pleasantly surprised with "Left Coast Cowboys" and the notes about their trip to the Dakotas. It turns out there was a lot more. For those interested in reading how others see the Dakotas, visit the earlier post that was much, much longer with regard to North Dakota.

And then from there, browse all the various places they visit. Highway 50 in Nevada was particularly interesting.

This morning on my favorite non-talk local radio station this little nugget. They were talking about all the records Star Wars set. They looked at ticket sales and said it was mostly men who bought tickets. And then this: "50% of all tickets were sold to men."

The same folks who mentioned that 50% of all Star Wars tickets were sold to men, re-reported the story of the Southwest Airlines a/c with a Chicago destination that circled for four hours over Oakland, burning off fuel, due to indications of a landing gear problem. I assume the landing gear problem -- if there was one -- would have been the same upon landing in Oakland or Chicago. One wonders why they didn't just spend the four hours traveling to Chicago and then making their emergency landing there? If things turned worse, there are a gazillion places to land between Oakland and Chicago including the Bonneville Salt Flats.

Speaking of which, if you need a feel-good movie, consider "The World's Fastest Indian," starring Anthony Hopkins. Speaking of which, while driving to a water polo tournament north of Denton, I happened to see an Indian motorcycle dealer. I couldn't stop there then, but maybe this weekend now that I'm free.

Which reminds me of some of my own experiences in the USAF. I was fortunate enough to be stationed at Bitburg Air Base (Germany) for two assignments. Bitburg, at the time, was home to several F-15 squadrons. The F-15 was billed as the Air Force's first "all-weather fighter."

The fog was so bad most winter mornings in Bitburg that these "all-weather fighters" were grounded until the fog cleared.

I had not planned to barbecue this winter (if you can call 70-degree weather in north Texas "winter") but with all the feedback I received on marinades, I plan to grill this weekend. My entire family here in north Texas -- my wife, our daughter, our son-in-law, our three granddaughters -- will be out of town. My wife is already in southern California and later this morning I drive the aforementioned family to the airport. I can't grill in the apartment complex -- at least, not easily -- but I have my grill over at the home of the aforementioned family and I just know the neighborhood will love the aroma of charcoal-grilled chicken and steak, and whatever else. My daughter got me a clever "appliance" for beer-can chicken -- a stainless steel holder for the beer can. I've done beer-can chicken so many times, I didn't see the need for this, but I do have to admit, it's pretty clever and will make it easier to remove the chicken from the beer can. 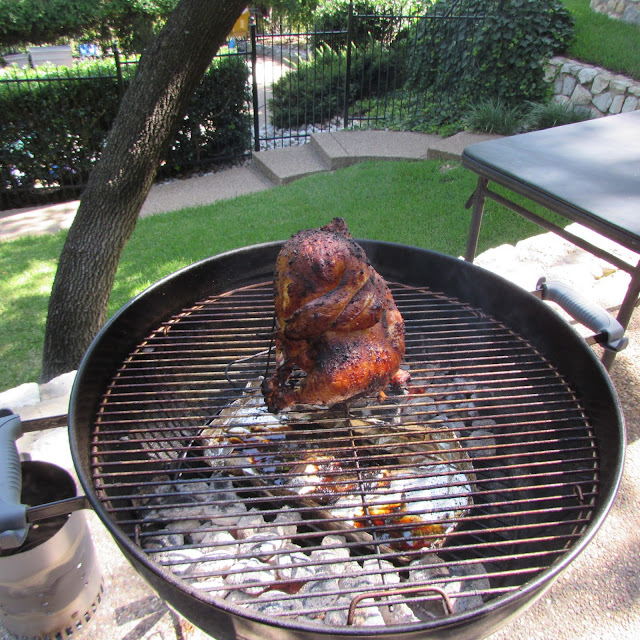 
In the new world where unencumbered crude exports are permitted, Corpus Christi holds a lot of strong cards as a major hub for shipping crude oil and lease condensate to international markets.

Crude and condensate shipments out of Corpus have gone through the roof since 2012 as production in the close-by Eagle Ford soared.

Pipelines offer producers direct routes to marine docks that currently ship crude to domestic refineries but could just as easily serve international customers. Today, we continue our look at Corpus’s emerging role as a crude oil/condensate hub with a review of existing and planned storage and marine dock facilities.

In the fall of 1921, after a day of South Texas deer hunting and several shots of whiskey—true story!--the U.S. Army Corps of Engineers’ district engineer in Galveston told the mayor of Corpus Christi that the Corps had selected Corpus as the site of a new deepwater port.

Five years later, a ship channel from the Gulf of Mexico to Corpus had been dredged and the port was in business. The port’s initial focus was on moving cotton, but by the start of World War II--with thousands of new oil wells being drilled in Nueces, San Patricio and other nearby counties, and the first refineries being built along the Ship Channel--the port’s business had shifted largely to petroleum and petroleum products.

Fast forward to the shale era. Oil still dominates activity at the port, and much of the Ship Channel is lined by refineries, a condensate splitter, storage facilities, and petroleum-oriented marine docks. And even with the recent slowdown in Eagle Ford and Permian Basin drilling activity, large volumes of crude and condensate are being shipped out of Corpus.

According to outbound commodity data published by the Port Authority, volumes of crude and condensate shipped out of Corpus averaged 680 Mb/d between January and November 2015. That is an amazing five times the average volume shipped in 2012 (136 Mb/d). According to the Corpus Port Authority data, outbound crude and condensate peaked in August 2014 at 757 Mb/d but was still close to 670 Mb/d in November 2015.