Lime Rock Resources, acquirers and operators of producing oil and gas properties in the United States, today announces that it has successfully closed a third acquisition in the Williston Basin.

The three Williston Basin acquisitions:
The entire description of the Russian Creek acquisition:


Lime Rock Resources acquired the North Dakota and Montana oil-weighted properties in the Williston Basin in 2015 from a large, publicly traded E&P company.

The date-time stamp will show something from 2015 or thereabouts. I am using an old "draft" post to place this note for various reasons.

Posting this now without comment. [Note: only two days of production in November, 2016; I will come back to this well in a couple of months.]

Before choosing this well to look at, I specifically looked for an older well in the Williston area where much more activity has taken place after this well was originally completed.

This is the graphic for this area: 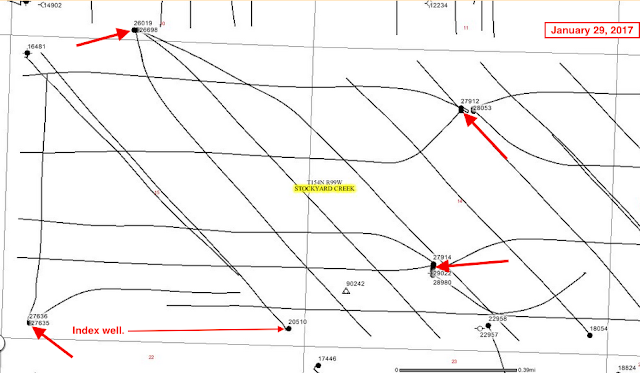 This was posted by the EIA on November 13, 2015. This brings us up to date. At the link, it is easy to see the "relaxed" rules on flaring.

I was surprised to see this in Scientific American.  It's another "scientific journal" that lost its way. The National Geographic, among the US glossies, is perhaps the worse when it comes to global warming hype.


The climate change debate has been polarized into a simple dichotomy. Either global warming is “real, man-made and dangerous,” as Pres. Barack Obama thinks, or it’s a “hoax,” as Oklahoma Sen. James Inhofe thinks. But there is a third possibility: that it is real, man-made and not dangerous, at least not for a long time.

This “lukewarm” option has been boosted by recent climate research, and if it is right, current policies may do more harm than good. For example, the Food and Agriculture Organization of the United Nations and other bodies agree that the rush to grow biofuels, justified as a decarbonization measure, has raised food prices and contributed to rainforest destruction.

Since 2013 aid agencies such as the U.S. Overseas Private Investment Corporation, the World Bank and the European Investment Bank have restricted funding for building fossil-fuel plants in Asia and Africa; that has slowed progress in bringing electricity to the one billion people who live without it and the four million who die each year from the effects of cooking over wood fires.

My hunch is that the Hollywood elite are not all that worried about the millions of people who still cook over wood fires.
Posted by Bruce Oksol at 11:25 AM No comments:

June 22, 2017: in less than five years, the US has flipped from next importer of LPG to net exporter, and exports are surging.

From crisis to glut in less than a year.

Liquefied petroleum gases (LPG) are the fastest-growing category of hydrocarbon exports from the United States, with volumes up almost four-fold since 2012.

Some data points:
Much more at the link.


The New York market for residential and commercial heating oil is traditionally tight in the winter months when demand exceeds local production and supplies are supplemented from storage and inflows/imports from outside the region.

Coming into winter this year inventory levels were above normal for the time of year and market prices are in contango (a condition where future prices are higher than today) – encouraging further storage. Today we explain how the result is an extension of traditional seasonal storage trade opportunities and a shortage of available inventory capacity.

Traders have long taken advantage of seasonal demand patterns for energy by buying when consumption and prices are low in the off-season then storing until supplies become tighter during the high demand season and selling at a profit. Northeast natural gas traders routinely used to take advantage of higher winter prices for gas that they buy cheap in the summer months and inject into storage – selling at a premium when winter weather pushes prices higher. That strategy is getting harder these days because abundant production in the northeast from the Marcellus and the Utica is keeping winter prices lower (as we pointed out earlier this week in “I Walk The Line”).

Another popular trade based on the same principal involves purchasing heating oil during the summer in the northeast - placing it in storage and selling when winter demand pushes prices higher. In both cases (natural gas and heating oil) the success of the trade relies on seasonal demand outpacing local production during the winter and pushing up prices enough to cover the trader’s storage costs and a margin to boot.

The seasonal heating oil trade is popular in the New York region because the CME/NYMEX heating oil futures contract requires delivery in New York harbor – meaning that participants have a pretty efficient hedging tool to lock in the seasonal spreads to profit from the trade. This year however high crude oil and refined product inventory levels in a generally oversupplied market are weighing on prompt prices versus those for future deliveries - a market condition known as contango that we have discussed several times this year. In New York the current heating oil market contango is providing an additional opportunity for traders to profit from storage outside the traditional summer/winter seasonal play.

There were a lot of energy-related stories throughout The Wall Street Journal today but none of them were worth linking -- the stories have already been covered in the blog ad nauseum or they are mostly fluff pieces it seems. There was one exception: Canadian Oil Sands attracts attention, page B8, very last page of that section and easy to miss. Searching for it on the web, I see that it it is an old story, posted two days ago. In fact, now I vaguely remember seeing it earlier and may have even posted / linked it. Whatever.


More than two dozen potential suitors have expressed interest in making an offer for Canadian Oil Sands Ltd. , including four “highly credible parties,” according to documents the company filed in an effort to thwart Suncor Energy Inc. ’s hostile bid.
The interest by other parties may slow Suncor’s momentum ahead of a Dec. 4 deadline it has set for a response to its all-stock bid—currently worth about 4.47 billion Canadian dollars ($3.36 billion)—for Canadian Oil Sands, the largest owner of the Syncrude oil-sands mining consortium.

Canadian Oil Sands last month rejected Suncor’s bid as too low and asked securities authorities in its home province of Alberta to uphold a “poison pill” provision enacted after Suncor made its bid that gives shareholders at least 120 days to consider a takeover offer.

As long as I've got the WSJ  in front of me, I might as well finish it. This is pretty cool. Our granddaughters had several Barnes and Noble gift cards that they have "collected" over the past year. On Wednesday, their mom took them to B&N to stop until they dropped. Our older granddaughter was thrilled to get the new illustrated edition of the first Harry Potter novel, as well as a small field guide called Fantastic Beasts and Where to Find Them, written by "beast" authority Newt Scamanader, based on J. K. Rowling's book. I mention this because the WSJ has an interview with Eddie Redmayne (Oscar winner, Theory of Everything, Stephen Hawking) who will play Newt Scamander in an upcoming movie.

I guess you have to hang around middle school teenagers to keep up with current events. But then again, that's always been true. Had I not taught middle school for a few years, I never would have known who Justin Bieber was/is.

The same WSJ has a long article on The Revenant. I think I've blogged about this before. Don't remember. Don't want to go through it again. Yes, here it is. The link to the WSJ story story is here.
Posted by Bruce Oksol at 10:03 AM No comments: