Overnight lows in / near the Bakken. 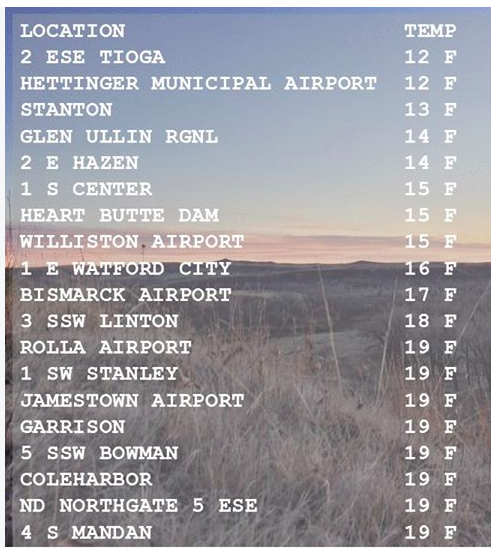 
Half of the 41 fracking companies operating in the U.S. will be dead or sold by year-end because of slashed spending by oil companies, an executive with Weatherford International Plc said.

There could be about 20 companies left that provide hydraulic fracturing services, Rob Fulks, pressure pumping marketing director at Weatherford, said in an interview Wednesday at the IHS CERAWeek conference in Houston. Demand for fracking, a production method that along with horizontal drilling spurred a boom in U.S. oil and natural gas output, has declined as customers leave wells uncompleted because of low prices.

There were 61 fracking service providers in the U.S., the world’s largest market, at the start of last year. Consolidation among bigger players began with Halliburton Co. announcing plans to buy Baker Hughes Inc. in November for $34.6 billion and C&J Energy Services Ltd. buying the pressure-pumping business of Nabors Industries Ltd.

I track fracking companies in the Bakken here. That site has not been updated recently.
Posted by Bruce Oksol at 3:53 PM No comments: Links to this post

Eleven (11) producing wells now completed:
Note: the Hess EN-VP And R wells are discussed in more detail at this post.

Posted by Bruce Oksol at 3:00 PM No comments: Links to this post

The Wall Street Journal reports that recycling glass is getting too expensive. Likewise, recycling plastic is not all that it's cracked up to be.

The report is posted on Earth Day.

My wife religiously recycles. We use more water cleaning plastic and glass containers for recycling than we use for watering the lawn. But that's because we have no lawn to water.


President Barack Obama promised to put a million more hybrid and electric cars on the road during his tenure, but new research shows drivers are trading them in to buy sports utility vehicles (SUVs).

The auto-research group Edmunds.com found that “22 percent of people who have traded in their hybrids and [electric vehicles] in 2015 bought a new SUV.”

This number is higher than the 18.8 percent that did the same last year, but it’s double the number that traded in their electric car for an SUV just three years ago.

Only “45 percent of this year’s hybrid and EV trade-ins have gone toward the purchase of another alternative fuel vehicle, down from just over 60 percent in 2012.”

“Never before have loyalty rates for alt-fuel vehicles fallen below 50 percent."

Several story lines:
The most surprising thing: I thought folks loved their EVs so much, they would be "replacing" them with newer EV models; not trading them in for SUVs. So we go from EVs to perhaps the poster child for all that is bad for the environment: gas-guzzling SUVs.

Whatever.
Posted by Bruce Oksol at 9:21 AM 4 comments: Links to this post

US Economy -- April 22, 2015; Amazon To Build Fulfillment Center In Target's Backyard; Warren Has A Reason To Smile Today

Remember the site for "GDP" projected in "real-time." Link here.  Or just type in "GDPNow" in google.


Existing-home sales jumped in March to their highest annual rate in 18 months, while unsold inventory showed needed improvement. Led by the Midwest, all major regions experienced strong sales gains in March and are above their year-over-year sales pace.

In Target's backyard, Amazon proposes to build another fulfillment center: The StarTribune is reporting:


Amazon.com Inc. is planning to build a distribution center in Shakopee that will employ 1,000 people and quicken its deliveries in the region.

The online retailer is seeking about $5 million in tax breaks, Shakopee Mayor Brad Tabke said Tuesday. “It is an extraordinary project we are really excited about,” he said.
Amazon plans an 820,000- square-foot building, most of it used as warehouse space, that will open in early 2017, according to a document outlining the company’s tax request. The estimated market value of the facility is $55 million, the document said. Analysts say Amazon often spends about $100 million to build such centers, which it equips with the latest robotics for storing and sorting goods.

The 63-acre site for the proposed facility is south of Hwy. 101 at Shenandoah Road, in an existing industrial park owned by Bloomington-based United Properties. Tabke said the process for considering the tax breaks is just beginning and the Amazon facility would require significant improvements to the existing infrastructure and roads.

Two questions: why did it take so long? And will Amazon get the tax breaks they request? If not, Fargo is not that far away -- and actually Fargo is closer to the Bakken.


The prospect of a comeback plan placated investors after McDonald’s profit missed analysts’ estimates and the company posted a sixth straight quarter of decreasing U.S. sales. The stock climbed as much as 2.3 percent to $97.07 in early trading Wednesday after the announcement.


BNY Mellon posted a profit of $779 million, up from $674 million in the prior-year period. On a per-share basis, which excludes preferred dividends, earnings rose to 67 cents from 57 cents a year ago. Revenue grew 5.6% to $3.85 billion. Analysts had projected 59 cents a share in earnings and $3.75 billion in revenue.

Japan's Nikkei increased 1.3%, closing above the psychologically-important 20,000 level and at a 15-year high. Tokyo's benchmark index closed above 20,000 on Wednesday for the first time in 15 years as hopes for strong Japanese corporate earnings overshadowed a weak lead from Wall Street.

Global Partners increases quarterly cash distribution 2.26% to $0.68/share. The CBR company out of the Bakken to the east coast.

T: beats, 63 cents vs 62 cents, though missed on revenue. Churn numbers best ever for a first quarter.

XLNX: a somewhat mixed report; came in at 50 cents; forecast 50 cents;  but income dropped 14% -- due to a restructuring charge.


ConocoPhillips  is seeking to grow its presence in the Delaware Basin, one of the three basins that make up the Permian Basin.

By capitalizing on the stacked potential of the play, ConocoPhillips' output from the Delaware Basin is expected to jump from under 10,000 BOE/d in 2014 to 25,000 BOE/d in 2017. By boosting its Permian capex budget from ~$400 million this year to ~$700 million in 2017, ConocoPhillips will be able to increase its drilling activity in the area. For 2015, Conoco intends to operate two rigs in the Permian, which will double to four by 2017. The Delaware Basin isn't going to be a major driver of growth over the next few years due to Conoco's size, but it's an important asset to pay attention to due as Conoco seeks to extend its growth runway.

"[W]e're now focused on our acreage in three areas as you see on the map, the Maverick, the China Draw and the Red Hills. And then recall that we have a 4,500 foot stacked pay interval here that is shown in the graphic down at the bottom. And each of these white dots that you see on the page are the -- in each of the three areas those show you the zones that we've now appraised that make up this billion barrels that we now have in our resource base. So overall, you could summarize this by saying that the early appraisal wells we've now got about 70 wells into this acreage are meeting our expectations and are demonstrating to us that we are going to have a large scale development here with attractive returns."


ConocoPhillips is forecasting that the ~100,000 net acres it has in the Delaware Basin houses "1 billion BOE of resource opportunity", which includes the relatively small amount of hydrocarbons Conoco has pumped out so far. As of now, Conoco sees at least 25 years of drilling inventory left on its acreage. Keep in mind, however, that this will most likely change as ConocoPhillips ramps up its development of the various plays within the Delaware Basin.  [1 billion / 100,000 = 10,000 boe / acre.] [The Bakken sweet spots: 48 wells / 1280 acre drilling unit * EURs of 750,000 bbls = 28,000 bo/acre.]


This story comes on top of the Permian condensate story just posted a few minutes ago from RBN Energy.


As the oil patch grows accustomed to a new world of $50 to $60 crude, it’s now looking ahead to a different but equally daunting sort of cliff. Oil companies are warning there will be a price to pay -- a much higher price -- for all the cost cutting being done today to cope with the collapse in the crude market. Big projects intended to start pumping oil and natural gas 5 to 10 years from now are being canceled or put on hold as the price crash forced $114 billion in spending cuts on the industry. Energy giants from Exxon Mobil Corp. to Royal Dutch Shell say they’re taking a much more cautious approach to approving projects that cost billions and take years to complete. That’s setting the table for a future oil-price shock when a growing world population drives higher demand, said oil executives and financiers at the IHS CeraWeek Energy Conference in Houston.


U.S. output in shale formations is expected to fall as soon as next month, according to the U.S. Energy Information Administration. Oil production decreases due to spending cuts and decline from aging fields, combined with demand growth, are likely to push prices higher in the next six months to two years, said Ralph Eads, vice chairman and global head of energy investment banking at Jefferies Group Inc. “I don’t see how the market isn’t going to be in an undersupplied position,” Eads said in an interview. “If you look around the world, where’s the deliverability going to come from? That’s the head scratcher. You just don’t know. It’s hard to make the math add up.”


Not everyone is anticipating higher prices soon. BP Plc CEO Bob Dudley and Exxon Chairman and CEO Rex Tillerson said Tuesday that they see oil staying lower for years into the future. Dudley said “lower for longer” has become the company’s mantra.

Only because Conoco is in the news today, and perhaps to put the Bakken into a bit of perspective, Seeking Alpha is reporting:


ConocoPhillips says it expects to post $142M in dry hole expenses in Q1 related to two projects off the coast of Angola and the deepwater Gulf of Mexico.

COP says a deepwater exploration well offshore Angola was drilled to a depth of ~20.6K ft. and that a gas column of 525 ft. was encountered in the primary objective reservoir with no further activity planned, and the well has been plugged and abandoned.

A well in the Harrier prospect at the Gulf's Mississippi Canyon was drilled to a depth of 19.4K ft. but no commercial hyrdrocarbons were encountered, and the well will be plugged and abandoned.

Posted by Bruce Oksol at 8:05 AM No comments: Links to this post