June 6, 2016: Whiting reports the results of three more P Lynch wells.  This is what the area looks like today:

February 3, 2016: I didn't see the sundry form (though I didn't look too hard), shortly after the permits were issued, the names of the four Stockyard Creek wells were changed:

Whiting has added another group of permits for eight (8) more wells, same configuration it appears, exactly one mile to the west, sited in section 33-155-95. Four P Lynch wells will run south into Stockyard Creek; four wells will run north in Epping oil field: 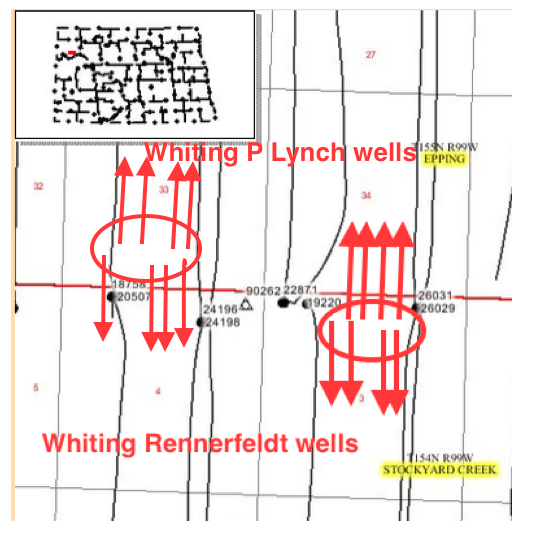 The big story continues to be the slump in oil prices. The number of active rigs dropped to a Bakken boom low of 113 before ending the week at 114 active rigs.

Eleven (11) new permits --
Fidelity canceled five permits, all in Stark County: a Katie, an Austin, a Wallace, a Mike, and a Horse Fence permit.

Rumor has it that Apple will be announcing updated MacBook Pros and MacAirs on Monday, March 9, 2015 -- just three days from now.

Shipping time for MacBook Pros and MacAirs has slipped. They used to ship "same day." Starting today, MacBook Pros and MacAirs won't ship for "one day." That one day is a "business day" -- Friday/Monday which suggests to many that if you had planned on ordering a MacBook Pro / MacAir today (the old version) you can still do so (order your laptop) but it won't ship until after Monday's announcement (and you will get the new version). Still rumor.

That announcement could be the "one more thing" that is announced alongside the Apple Watch Monday.

For newbies, this is the simplified Apple line-up, smallest to largest in footprint:
Caveat: that's my take on Apple line-up; it's not entirely correct/accurate, but it's good enough for me. For that, you need to go to Apple.com.

Just a quick note before I sign off for a bit: my workhorse is the MacBook Pro. Off and on over the past few days I have been using my wife's MacAir. The latter is incredible; wow, it's fast and light. It's very possible by the end of the year, I could have my own MacAir but if they come out with a larger (footprint) tablet, that's going to be tough to resist. But most likely, being the "cheap" person I am, I won't get either. Whatever.


“Apple has always been about ‘affordable luxury’: at the higher end of the price range and with a premium feel, but it’s always been within reach of the ordinary consumer,” says Jan Dawson, technology analyst at Jackdaw Research. “This is the first time that Apple has moved into straightforward luxury.”

A trillion-dollar company needs to set itself apart from all the also-rans.

The iPad. A lot of folks seem to be concerned about the iPad -- that it isn't pulling its own weight financially compared to the rest of the Apple line. Hold that thought. Link here.

My wife doesn't understand it, but I can watch the same movie five times in a row over the course of two or three nights when I get into "the mood."  Casablanca; The Great Gatsy (DiCaprio), Lost In Translation, Sunset Boulevard, The Big Lebowski, Only Lovers Left Alive, Midnight in Paris, The Maltese Falcon.

It was nice to see a column on the book itself, The Maltese Falcon, in today's WSJ:


“It is the ultimate detective novel, and frankly not just detective novel,” Mr. Larson said. “I think it’s one of the best novels, period… Here’s this writer, here’s Hammett, who in 217 pages creates this world with four of the absolutely most vivid characters that literature, I think, has ever come up with.”

I don't think I ever read a Zane Grey western, but my hunch is there are more than several devoted Zane Grey fans that check in on the blog every so often.

So, what am I reading now? I generally read several books at one time, remembering very little from each, but with notes, it helps. Athens by Christian Meier, is the big book right now; but I'm also starting to read Alison Weir's Eleanor of Aquitaine for the second time.  I have to keep reading and re-reading British history to remember it, but I think I finally know where Eleanor fits in.


You Don't Own Me, Klaus Nomi
From a comment regarding Leslie Gore's version: In 1964, this song/attitude was revolutionary. My sister worked at an A&W drive-in the summer it came out. It was the "car-hops" theme song. When they had a bad night, or pushy customer, they would come in and say "SOMEONE play B-16, NOW! and TURN IT UP!!"
To send a message out to the lot.﻿
Posted by Bruce Oksol at 10:24 AM No comments:


There are no MRO rigs actively drilling in Dunn County at the moment. Link here.  UPDATE: a reader tells me that there is still a Marathon rig in the far northwest corner of Dunn County.


In the five years since gas production began to take off in the Marcellus, gas processing capacity in the northeast has expanded nearly 13 times over from 600 MMcf/d to 7,600 MMcf/d. Natural gas liquids (NGL) production from those plants began to expand significantly in 2011 and is now over 245 Mb/d. Midstream companies have developed gas processing infrastructure from a small group of stand-alone plants into a fully integrated system designed to operate without the luxury of significant NGL storage capacity. Today we begin a new series describing how the innovative infrastructure build-out has overcome regional constraints. 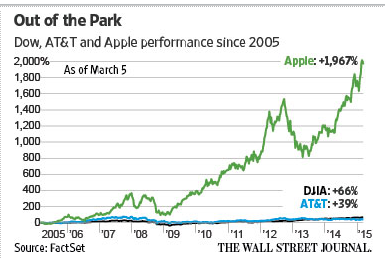 A shout-out to Apple Tech Support: yesterday my wife noticed that she was getting her Yahoo! e-mail on her MacAir but not to her iPhone. A google search revealed this is not particularly unusual but we were not able to correct the problem on our own. May called Apple Tech Support, and was talking with a technician almost immediately (I didn't ask, but it did not seem she was on hold at all). She was in another room out of earshot so I don't know all the details but she was on the phone with tech support for, I bet, 45 minutes. The problem was solved, but the Apple technician has no idea how the problem began in the first place. In the end, it appears, my wife and Apple simply re-initialized everything. At one point she was on three devices: her MacAir, her iPhone 6, and my Samsung 2009 (or thereabouts) clamshell dumbphone.
Posted by Bruce Oksol at 8:41 AM No comments:

Everybody was expecting a dismal February jobs report because of global warming winter cold but surprise, surprise: one of the best months ever. Reuters is reporting:


U.S. employment accelerated in February and the jobless rate fell to a more than 6-1/2 year low of 5.5 percent, signs that could encourage the Federal Reserve to consider hiking interest rates in June.

Nonfarm payrolls rose 295,000 last month after rising 239,000 in January, the Labor Department said on Friday. The decline in the unemployment rate from 5.7 percent in January took it to its lowest level since May 2008.

The gazillions of dollars in stimulus worked. Happy days are here again. This means Ms Yellen can feel free to raise rates next month.

By the way, unemployment is now at 5.5% I feel strongly that full employment in the US should now be reached whenever unemployment is 6% or less. We all know the figures are massaged and adjusted and don't reflect reality, but they are what they are. Comparing apples to apples: full employment historically defined as 4% does not reflect the incredible social safety net now in place, particularly with disability (physical and mental heath) coverage. With technology shifts thrown in, cost of living, quality of life, 6% certainly equates favorably to 4% unemployment back in the 50's. Not many unemployed folks had large flat-screen televisions in 1951; I assume it's the rare unemployed individual toda that lives in a house without a large flat-screen television. In addition, there are headlines suggesting all the newly arrived, undocumented immigrants will be getting federal checks just for being here. Unemployment at 5.5% -- huge milestone. The market agrees: it's down 250 points -- momentum traders know that Janet Yellen is itching to raise rates.
Posted by Bruce Oksol at 8:09 AM No comments: