The other day I mentioned that things were not looking good for either Angola or Nigeria. More evidence today that the observation was very, very accurate. Cobalt is bolting; it will sells its off-shore Angola interests back to state-owned Sonangol:


Cobalt International Energy Inc. has agreed to sell its interests in two blocks in deep water offshore Angola to state-owned Sonangol for $1.75 billion and will concentrate on appraisal and development of deepwater discoveries in the Gulf of Mexico.

Of the discoveries, Cameia is closest to development. Cobalt said a final investment decision is expected by year end. It estimates the Cameia resource at 300-500 million bbl and expects productivity of 30,000 b/d/well of 39°- 41° gravity oil. Cobalt will operate both blocks until replaced by Sonangol or another operator. Sonangol will bear all costs in the interim.

Gee, just when Cameia was about to come on line, also. I wonder if Sonangol has the finances to develop that field "in the interim."

Short history: historically, going back to the early days in the US, refiners were optimized for light US oil. At the end of the 20th century, with the relative demise of the US on-shore oil and gas industry, with heavier oil being the major oil available, refiners spent billions of dollars retro-fitting their refineries to handle heavy oil. They were betting on the come that western Canadian oil sands would be flowing down the Keystone. In fact, that failed, and lo and behold, the Bakken revolution. Unfortunately, it was the revolution of the "light brigade." Light oil would not work in US refineries along the coast and those refiners had to scramble to blend overseas heavy oil with US light oil to make it work. Now, the refiners have invested huge amounts of money to optimize their refineries to handle light oil.

Angola's off-shore oil at 39 - 41 is absolutely not needed by the US which has a glut of that lighter oil. Angola will have to look elsewhere to sell its light oil.

Over the weekend I said to myself I need to post a note to the effect that the next regularly scheduled  OPEC meeting is in December, 2015, but an emergency meeting before December would speak volumes. I did not really discuss with myself the likelihood of whether an emergency meeting would be called.

Wow, I wish I had posted that. Whatever.


Iranian oil minister Bijan Zanganeh said on Sunday he supported the idea of an emergency OPEC meeting to discuss how the oil producer group might respond to the latest oil price rout that on Friday saw US light crude trade below $40/barrel for the first time in six years.

However, he added, such a meeting was unlikely to take place because of what he called the "political objectives" of some member countries. He did not elaborate.

Exactly. I think OPEC needs to meet but they can't meet for "political reasons." First, the meeting would result in inter-tribal squabbling and would end with no "true" consensus. Second, just calling the meeting would be interpreted as Saudi "losing face."

There could be some informal meetings, but the real problem is this: OPEC as a functioning organization is dead. Venezuela, Ecuador, and west African OPEC nations are on the outside looking in; they will be the first to fall. One might add Libya to that group except that country is already in free fall.

If Saudi has last this long, they will easily last three more months, if nothing else, just to keep from "losing face."


Saudi Arabia's strategy for rebalancing the oil market through a period of lower prices shows few signs of working so far - with rival producers claiming they will raise output even as prices slide to new lows.

Saudi policymakers insist the kingdom will maintain its market share and let low prices take care of the surplus by forcing cuts from higher cost producers and stimulating fuel demand.

With prices down by more than half compared with the same point in 2014, oil consumption is growing at some of the fastest rates for a decade.

There are signs output growth from shale drillers and other producers outside OPEC is starting to slow, but it is not falling yet.

Within OPEC, other producers, principally Iraq and Iran, are determined to continue raising their output even as prices slump.

"We will be raising our oil production at any cost and we have no alternative," Iran's Oil Minister Bijan Zanganeh said in a news story carried on his ministry's website.

"If Iran's oil production hike is not done promptly, we will be losing our market share permanently," Zanganeh added.

Saudi Arabia's strategy may not be enough to eliminate the surplus and lead to a sustained rise in prices in the next two or three years.

The resilience of non-OPEC output despite slumping prices, coupled with a continued battle for market share within OPEC itself, contributed to the "lost decade" in oil markets after 1986.

Oil producers and investors fear the same stalemate could be playing out again.

Later in the article:


"Saudi Arabia believes that the price war eventually will eliminate much oil from non-OPEC producers, such as Britain and the United States, because their oil is too expensive to produce," the Wall Street Journal wrote in 1986. The exit of this oil would make more room for OPEC production growth.

But while non-OPEC production stopped growing for four years after 1985, it defied expectations it would fall, and started rising strongly again in the early 1990s.

MIT economist Morris Adelman explained: "The shock of the oil price chilled investment. Non-OPEC production barely increased from 1985 to 1992. But its failure to decline was a great disappointment."

One reason production failed to decline was lower prices stimulated a drive to make production much more efficient, including the first widespread use of three dimensional seismic surveys and horizontal drilling. [Think Bakken -- world's largest micro-seismic array, I believe.]


There are key differences between 1986 and the oil market today. In 1986, there were estimated to be 6 million barrels per day of spare capacity shut in among OPEC members, compared with less than 2 million currently.

But there are also echoes, including Saudi Arabia's insistence it will not cut production, attempts by Iran and Iraq to boost theirs, and the resilience, so far, of non-OPEC output in the face of slumping prices.

Saudi Arabia's strategy could yet be vindicated. It takes time for a price crisis to work through to changes in production and consumption.

There are lags in the production data. Output from shale producers and the non-OPEC non-shale sector could already be falling even though it is not evident in the official numbers yet.

Much, much more at the link, including other links and references. 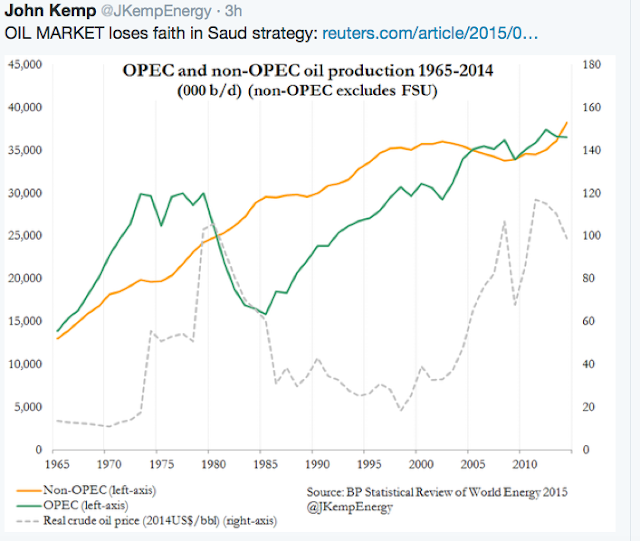 Saudi Arabia has much more to fear from Iran than from the United States.
Posted by Bruce Oksol at 10:11 AM