May 10, 2015: a Harvard study, published in the New York Times supports my thesis that drivers licenses and access to a dependable automobile is critical for success more often than not in the 21st century.

His commuting problems highlight a central theme for many low-income people trying to build a better life: A lack of reliable and efficient transportation is often a huge barrier.
In a large, continuing study of upward mobility based at Harvard, commuting time has emerged as the single strongest factor in the odds of escaping poverty. The longer an average commute in a given county, the worse the chances of low-income families there moving up the ladder.

The relationship between transportation and social mobility is stronger than that between mobility and several other factors, like crime, elementary-school test scores or the percentage of two-parent families in a community, said Nathaniel Hendren, a Harvard economist and one of the researchers on the study.

Later, 6:32 p.m. CT: buried at the end of this post were my thoughts on this from the linked article:


More teens and 20-somethings are waiting to get a license. Less than 70 percent of 19-year-olds now have one, down from 87 percent two decades ago.

"I wonder if they've decided that there's another, better way to be free and to be mobile," says Cotten Seiler, author of "Republic of Drivers: A Cultural History of Automobility in America."

A reader noted that today's teens and 20-somethings may not be driving automobiles because
More risk-averse: readers my age grew up not wearing helmets while riding bicycles, and wrist protectors while skateboarding; today's kids grew up with mandated helmets and recommended wrist protectors; they've carried that risk-aversion into adulthood.

In urban areas with great mass transportation and while going to college, for example, there is less need for automobiles.

My 30-second soundbite: today's kids are no different than the kids of fifty years ago. About the same percent of kids -- in today's world compared to the 1950's -- would love to have a car. If the percent is dropping, there must be a reason.

I think the reader is exactly correct on less need for cars but I wonder if it might not be for a different reason: delayed adolescence. More and more kids are living at home with their parents longer and longer. They save rent money and they save money by driving one of the two, three, or four family cars registered to their father and/or mother. (The problem with this explanation, of course, is the data below apparently talks about the decline in driving licenses; so even if living at home with access to a car, a lot of "kids" still don't have a license. So, I'm back to square one and very confused. I won't talk about it any more.)

If there are more kids in college, that, too, would help explain the declining car ownership. All things being equal, there's less need for a college student to have a car than for a young adult living on his/her own and having a full-time job. Except for a few cities on the east coast and San Francisco on the west coast, there are very few areas where mass transportation works. To get around in most places in the US, a car is needed.

I think it's a) delayed adolescence; living at home with parents; and, b) higher percentage in college.

If there is an element of risk-averse accounting for declining car registration, ....

The average use per vehicle within a household is greatest in a two-vehicle home, where the average vehicle travels about 11,800 miles. This average declines as the households gain more vehicles so that a six-vehicle home averages about 9,600 miles per vehicle. --- EIA

And exactly how many folks do you know that have six or more vehicles (not counting farmers and ranchers)?

A google search was not helpful, though I did not spend much time on this article. The Huffington Post noted, back in 2014:


After rising almost continuously since World War II, driving by U.S. households has declined nearly 10 percent since 2004, with a start before the Great Recession suggesting economics is not the only cause. "There's something more fundamental going on," says Michael Sivak of the University of Michigan Transportation Research Institute.

The average American household now owns fewer than two cars, returning to the levels of the early 1990s.

More teens and 20-somethings are waiting to get a license. Less than 70 percent of 19-year-olds now have one, down from 87 percent two decades ago.

"I wonder if they've decided that there's another, better way to be free and to be mobile," says Cotten Seiler, author of "Republic of Drivers: A Cultural History of Automobility in America."

I think I may have linked this article some time ago. This simply tells me that with or without the Great Recession, younger folks simply have difficulty making / saving money to buy a car and pay for the insurance and the maintenance.

Michael Sivak needs to ask the twenty-somethings if they would like a car if it were free, sort of like an ObamaCar. My hunch is that 99.9% of twenty-somethings without a car would gladly take a free Ferrari and keep it if someone paid the maintenance, gas, and insurance.

Here's the answer to the original question (how many people own six or more vehicles?): 1%. 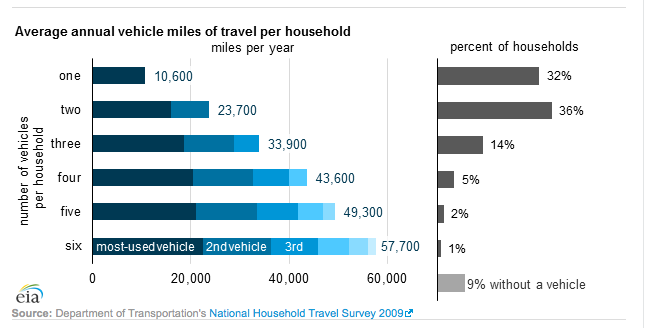