Actually, the only reason I'm posting that link is so I can put up a different video of the Bakken theme song:


It's Only Make Believe, Conway Twitty

It's hardly the best rendition, but the historic film footage of NYC is priceless.
Posted by Bruce Oksol at 5:53 PM No comments:

I assume there are typographical errors on this page; I will eventually get around to correcting them.

From Seeking Alpha, is this the best investment in shale oil? This is a must read, not for investment purposes -- remember, this blog is not an investment site -- but to compare the situation now with past situations in the oil industry, as noted in the excerpt from The Prize below "the fold." [SA articles are often archived and available only by subscription. This article may be worth saving. A word to the wise.]

Don sent me the SA article linked above quite some time ago; I was traveling and only recently got back to it. And I'm glad I did.


Meanwhile the oil market was responding to the phenomenal rise in prices over the 1970s and consumers' fears for the future. Yet the exporters were still unwilling to face up to the fact that that "objective conditions" of the marketplace were truly shifting.

They would not contemplate a price cut.

Prices were still in disarray, but finally, October 1981, they came to a new agreement.

So prices would be unified. When all the changes were factored in, the average price of oil on the world market would still, because of the Saudi increase, go up a dollar or two. For the other producers, the compromise did, of course, mean a price cut. Yet there were consolations. Saudi Arabia had agreed, at last, as part of the deal to go down to its old 8.5-million-barrel-per-day ceiling.

Iraq and Iran remained locked in bitter battle. Yet even a war between two of the most important exporters could only retard but not cancel out the powerful forces that had been set in motion by the two oil shocks.

October 1981 represented the last time that the OPEC price would go up, at least for a decade. The "divine laws of supply and demand" were already in motion to drive prices down, though not yet with the thunderous vengeance that was still to come. It was, as Yamani had said, as simple as ABC.

That was the end of chapter 34.


In the first days of June 1985, OPEC ministers congregated at Taif in Saudi Arabia. Yamani read them a letter from King Fahd, who sharply criticized the cheating and discounting by other OPEC countries that had led "to a loss of markets for Saudi Arabia."

I read this book years ago, but reading it again, is quite fascinating in light of the current situation.

If one has not read this book, you may not be interested in reading from the beginning, but certainly from Chapter 34.

By the way, and this was back in the late 1970s, this excerpt from the book:


Some companies like Occidental and Unocal, were already working on shale oil technology.

In 1980, Exxon, the world's largest oil company, looking ahead to what seemed the inevitable shortage, hastily bought its way into the Colony Shale Oil Project on the Western Slope.

Sixty years before, in another period of shortage, the company had acquired acreage in  the same are to develop shale oil as a fuel. Nothing had come of it then.

Now Exxon became, by far, the leader, spending fully a billion dollars on shale oil development, getting ready for the "new era of energy."

Exxon had had a love affair with shale oil for a long time," recalled Clifton Garvin, the company's chairman. "It was a challenge, technically, and certainly economically."

But over the subsequent two years, the economic outlook changed quickly and drastically. In real terms, the oil price was going down; so was demand. So were forecasts for both. Surplus production capacity was building in the oil-exporting countries. And, all along, the cost estimates for the Colony Project kept going up.

"We were looking at $6 or $8 billion for 50,000 barrels per day," recalled Garvin. "And there was no expectation that that was the end of it.

The next day, Garvin assembled a senior management team and  asked what would be the consequences of stopping. "It was a tough decision. I rode that decision."

On May 2, 1982, Exxon announced tersely that it was terminating the Colony Project. Nothing that the company now saw in the economic outlook could make the shale oil project viable.

The boom on Colorado's Western Slope ended literally in hours, as work came to an instant stop.....now, in three towns in Colorado, newly built homes were empty; weeds quickly covered landscaped lots; half the apartments went unrented; construction workers from the Midwest packed up and headed home; traffic evaporated from the roads; and teenagers with nothing else to do took to vandalizing the partly built homes and office buildings.

The very next paragraph is incredible, but I have to stop somewhere. 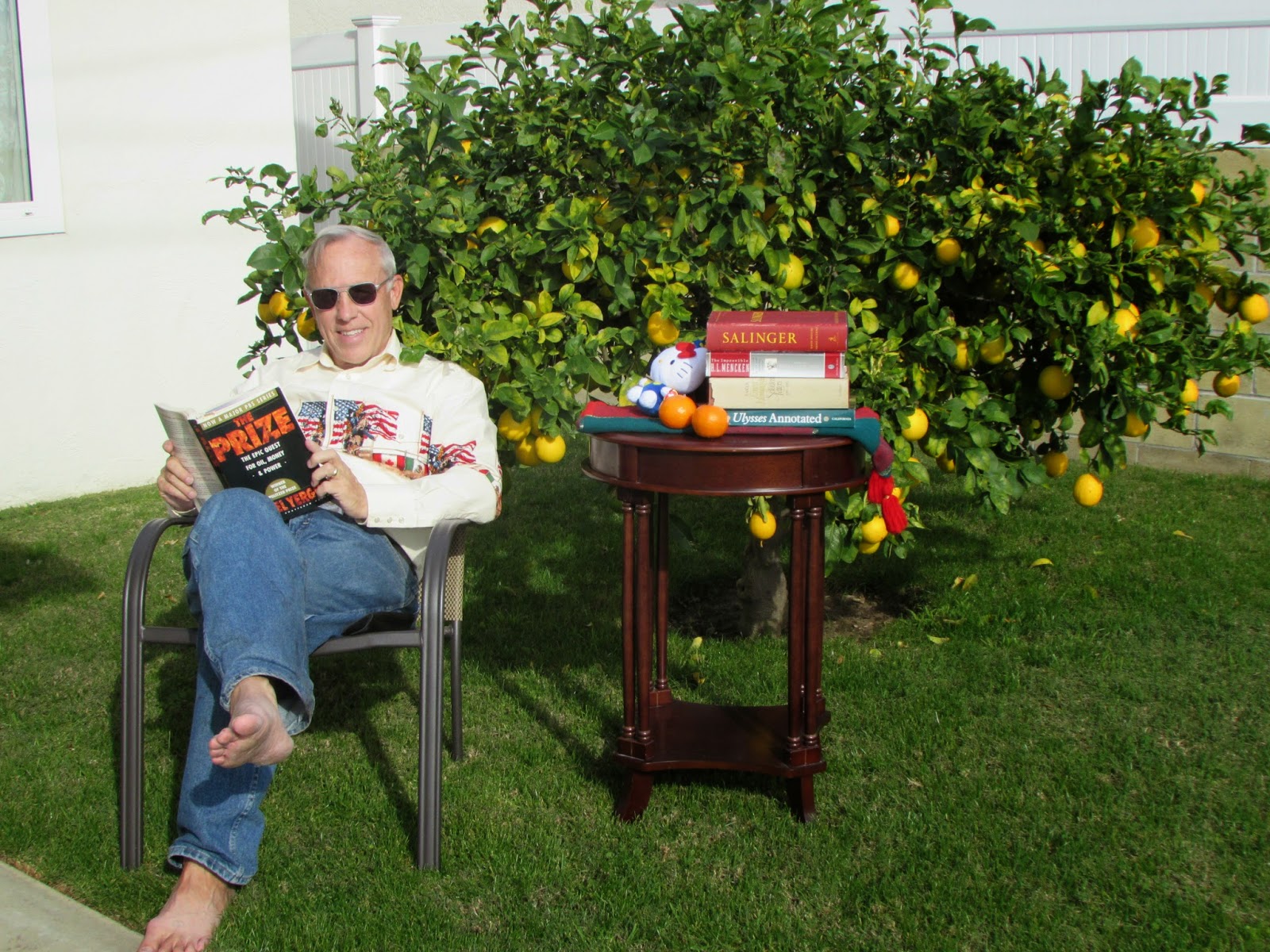 The project is scheduled to be completed in mid-February.

PJM Interconnection, a regional transmission organization that handles electricity for 61 million Americans in 13 states and Washington, D.C., said this week it will seek to delay the idling of 2,500 megawatts of electric generation through April 2016.

"PJM Vice President for Operations Mike Kormos said the RTO is acting in light of the 22 percent forced outage rate from last January and uncertainty over the role of demand response in the wholesale markets," the publication said.

American Electric Power Company Inc. CEO Nick Akins has pointed to such strained capacity as a warning sign that environmental regulations starting next year, which will shut down 7,200 megawatts worth of AEP generation, will threaten reliability.

Email ThisBlogThis!Share to TwitterShare to FacebookShare to Pinterest
Labels: PJM


The Israeli government’s ruling has huge implications for the future of the region as it means that at best the supply of gas from Leviathan will be delayed into the 2020s.

At worst it will not happen at all.

The government’s concern about a gas monopoly is a legitimate one, especially during an election campaign when issues of cost of living dominate the local political discourse.

But its hopes that the hot potato called Leviathan can somehow be sold to new partners require a lot of faith. There are many people with money who may be tempted to buy into a partnership in a 22 trillion cubic feet (tcf) field, but owning a stake in a gas field without an operator at hand is like owning a gold mine on the moon.

There are very few oil and gas companies who have both the experience of drilling in deep waters and the willingness to associate themselves with Israel, especially in light of Noble’s experience. With falling energy prices worldwide, the chance of a Noble-like operator popping out of nowhere is slim.

This means that in its desire to avoid the creation of a monopoly, Israel is taking the risk that Leviathan, the world’s largest offshore gas discovery of the past decade, will not be developed for many years to come - if ever.

The losers will first and foremost be the Israeli people who will lose not only billions of dollars in tax revenue and the main engine of growth of their economy but also the prospects of securing their energy supply for generations. The scenario is equally bad for Jordan, Egypt and the Palestinian Authority who are counting on Leviathan gas for their economic well-being and which have all signed letters of intent to buy Israeli gas despite local opposition from their respective Israel-hating Islamists.

Europe will also be a casualty since a portion of Leviathan was aimed for two LNG terminals in Egypt from where it would have been shipped to European countries aspiring to become less dependent on Russia’s gas.

The story at Rigzone by Reuters, the day before:


Israel's antitrust authority said Monday it may revoke an arrangement permitting an Israeli and a U.S. company to develop Israel's largest natural gas field by branding them a cartel.

The authority summoned representatives of Israel's Delek Group and Texas-based Noble Energy and told them it was "still considering to announce that buying Leviathan was illegal.

"We didn't make any decision today," an authority spokesman said after the meeting had ended. Anti-trust authorities have been targeting the companies, which discovered the field and two others, after criticism that the firms have too much control of such valuable national assets.

Suicide Is Painless, Theme From MASH
Posted by Bruce Oksol at 2:16 PM No comments:


U.S. crude inventories in the United States rose by 7.3 million barrels last week to their highest December level on record, the Energy Information Administration reported. Analysts had expected a drop of 2.3 million barrels.

Oil prices were already lower in extremely thin holiday volume, and extended losses after the EIA data. Crude was down as much as $2 a barrel. Brent seesawed on both sides of $60 and U.S. crude hovered around $55.

"It's a Christmas flood of oil at a time when refiners and producers usually are letting inventories get lower for end-of-year tax reasons, but with this flood of supply there's no place to put it," said Phil Flynn, analyst at Price Futures Group in Chicago.

Describing the data as "very bearish" and playing into "the mantra of supply glut", Flynn said it would be interesting to see if U.S. crude would test a $53 low before the year ended.


When December comes to an end, the only things left from a long line of John Deere Green tractors in RDO Equipment parking lot in Rapid City may be the imprint of tire treads in the soft ground.

The continued demand from consumers for beef and the dwindling livestock numbers have raised beef sales to record prices over the past year, which means the annual income for many Black Hills ranchers is up.

While that could have meant a drastic spike in taxes for area farmers and ranchers, a 1-year tax break extension, signed into law by President Barack Obama on Friday, will allow them to deduct equipment purchases from their 2014 taxes.

The tax break allows businesses to deduct up to $500,000 when they file their 2014 tax returns, provided those businesses spend that money on equipment and put it into use by midnight Dec. 31, according to the website.


Global death toll from Ebola has risen to 7,588 out of 19,497 confirmed cases recorded in the year-old epidemic raging in West Africa, the World Health Organization says - @Reuters

Meanwhile, the CDC says about 1,440 people in the US are currently on the Ebola watch list; that information is not available on their website, but reporters specifically asking the question, get that answer.

Later, same day, tweeting:  CDC officials say there was no possible exposure outside the secure laboratory at CDC and no exposure or risk to the public after potential Ebola exposure in Atlanta lab - @washingtonpost. The Washington Post has a longer report here. It looks like it was just a simply human error. It happens.
Posted by Bruce Oksol at 11:11 AM No comments:

Link here.
Posted by Bruce Oksol at 12:32 AM No comments: