Flurry of Fury Over ObamaCare

I do not yet know the context, but this is quite incredible. There is one big "message" here.

I'll come back to it later. [Update: initial thoughts here.]

Woody Allen's Midnight in Paris and then The Great Gatsby. Going to be a great night.
Posted by Bruce Oksol at 7:09 PM No comments:

Email ThisBlogThis!Share to TwitterShare to FacebookShare to Pinterest
Labels: ShumersSillySpeech

I was surprised by this. It looks like the natural gas fill rate will be released at 12:00 noon today. This post might have the best background for newbies. The tag at the bottom of the post, "NG_Fill_Rate" will take you to previous posts on this subject in chronological order.

Even the producing region saw a net withdrawal.

Most incredibly, look at the graph at the link, the gap between today's data point and the 5-year historical average has widened.

The "historical decline rate" for the past month (October 14 - November 21) was always pretty flat. This year, that same period, a distinctive downturn. Global warming.

Natural gas is currently up 6 cents, to $4.46, trending higher. The first monthly report for winter is still five weeks away.

A reader sent me this link:


State utility regulators today approved a 500-mile transmission line designed to ferry thousands of megawatts of power from wind farms in Iowa and other Plains states into the Chicago market.

The unanimous endorsement by the Illinois Commerce Commission, over the opposition of Commonwealth Edison, was a major regulatory hurdle for the developers of the $2 billion Rock Island Clean Line.

I've become "agnostic" with regard to wind, but the fact that Commonwealth Edison opposed this suggests the utility is concerned about the "road to Germany" in which utilities are at great risk with the business model being proposed by the Illinois Commerce Commission, but it's their call, and the "road to Germany" is well-known.

Some data points and stories that pretty much tell  us some exciting things about the energy picture in North America. 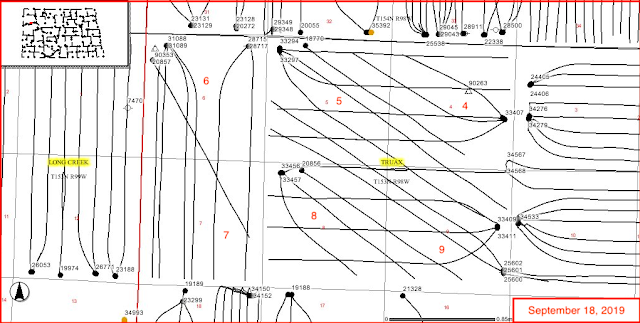 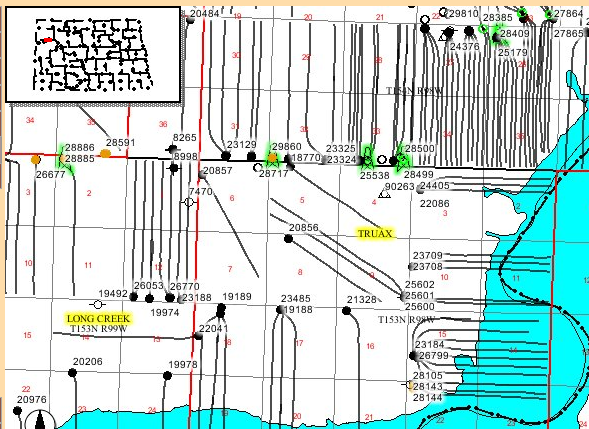 One can tell from the map, that there is a lot more room for a lot more Scanlan wells.

I "wish" NDIC would make a distinction between "truly dry wildcats" and wells that were not completed due to operational issues, not that the well was "truly dry."

I remember when I was the manager for our high school football team. I was responsible for tracking rushing and passing statistics (among a whole of other things). I was never told how to do things, "just do it." (Nike.) So, when it came to passing, I tracked the yardage of the pass itself, and then the yardage gained after the pass. My coach thought I was nuts. He just wanted the "passing yardage," and he didn't want it broken down into two elements. I see now, the NFL and the television broadcasters break it down the same way.
Posted by Bruce Oksol at 9:40 AM No comments:

RBN Energy Tells Us How Huge The Canadian Oil Sands Really Is, A Must Read -- November 26, 204


RBN Energy: the diluent transportation story in Canada; building enough pipeline to reach 1 million bopd by 2017, more than enough through 2030; part 6 in the series.

Some data points from the article:
Much, much more at the linked article including great graphics as usual.

It is being reported at The Dickinson Press.  I'm not aware of anything new that hasn't beer reported earlier:
Data points:

As mentioned yesterday, I stayed up all night Monday/Tuesday listening to radio reports on Ferguson. These were the things the stood out for me:
And then this: along with Martin Luther King, I am judging the agitators in Ferguson on the basis of their character (actions), and not on their skin color.
Putting things into perspective. This from CBS-StLouis-Local :


Barnes-Jewish Hospital in St. Louis says it admitted two injured people and treated and released five others. It didn’t disclose the nature of the injuries.

Years ago, in another life, I worked in the emergency room of Los Angeles County hospital during the height of the gang wars. My surgical rotation had emergency room call every Saturday, 8:00 a.m. through Sunday morning, 8:00 a.m., and we stayed with our patients until Sunday evening, 5:00 p.m. when we were finally relieved after 33 hours of being in a virtual war zone from a casualty perspective. When I think back on that now, it really was incredible how good the nurses and technicians were at triaging and performing life-saving procedures, freeing the surgeons up for cases in the operating room. I never recall an administrator or a "clip-board nurse" getting in our way. It's amazing how much one can do with a) intubation and artificial respiration; b) stopping bleeding with relatively simple procedures; c) infusing liters of clear fluids.

The surgeons "fought" for this shift -- the busiest surgical night of the week. When casualties from gang fights started rolling in, our first question to the combatants was, "how many more are coming in?" We needed that data to start triaging.

Saturday nights were so busy with gang wars that folks presenting with non-traumatic medical / surgical emergencies were stabilized, often with huge doses of antibiotics and placed in holding areas (usually hallways) waiting to be admitted or taken to the operating room the next day.

So when I see "two were admitted" and five were released in that story above it really puts things into perspective. I doubt more than four or five LA police cruisers responded to any given gang war, and yet, here in Ferguson, thousands of law enforcement and national guard, and no "police state" killings reported in the early going. Pretty impressive.

Unfortunately, it seemed the press and a few others were hoping for more.

Email ThisBlogThis!Share to TwitterShare to FacebookShare to Pinterest
Labels: Diluent

Later, 10:02 a.m. CT: I find this interesting. I truly thought the 313,000 number was quite incredible (especially considering all the data points below, and the miss by analysts by 26,000 -- that's a huge, huge miss). But yet, Reuters/Bloomberg were so sanguine (is that the right word?). I was wondering. But then I saw this: Matt Drudge was also surprised; he put the link in red with the headling saying that the number was above 300,000. Whew! I feel better that I wasn't misreading the story.

Yes, Virginia, this report is horrendous. Let me count the ways.

First, back on November 13, 2014, just a couple of weeks ago, when the increase was big, but not as big as this past week, Reuters called it simply a "pause" (applications surge 12,000 to 290,000). We'll look at the Reuters spin for this week's data later. (Spoiler alert: Reuters did not say this was a "pause." They just said everything was, and I'm paraphrasing here, "okey-dokey."

Second, Reuters says there was nothing "special" to explain this surge. That's scary, when a surge like this cannot be explained away.

Fifth, this is just before the holidays (but not yet the holiday season)when retailers have been scrambling to hire folks for seasonal jobs. One can only imagine the number had retailers been laying off folks.

Sixth, this is just after President Obama invited up to 5 million more undocumented workers to stay in the US "permanently." Well, for at least three years with no threat of deportation. And, yes, they will collect benefits, at least according to a headline I surfed through (without reading the story; I can only take so much depressing news in any given day).

Now, back to the spin.

Reuters:
Bloomberg:
For the record, the four-week average: not said in either article; Reuters simply mentioned it was below 300,000.
Other economic data was released in the same report. Consumer spending kept pace with income (which isn't saying much). This was key: the stock market, which had been in the green, went negative after the report.

Later, 9:51 a.m. CT, November 26, 2014: I found this most recent surge so interesting that when I saw the AP headline, I decided to see how the AP handled it:
How interesting. I was led to believe by Reuters/Bloomberg that the four-week average actually decreased; either I misread their articles (they were not explicit about the number) or I was misled (which happens a lot; I don't spend a lot of time on any of these things).

I was actually surprised when I thought Reuters/Bloomberg said the four-week average actually decreased. I thought that was highly unlikely due to last week's surge. I did not correct the original blog above, just left it as written. I did add this to the subject line.
Posted by Bruce Oksol at 8:39 AM No comments:

A Reminder: URL For The Blog

If you click on some very old links, you may end up with an alert suggesting that page is missing or does not exist or something to that effect.

As far as I know, none of the links to past "milliondollarway.blogspot.com" posts are missing.

If you get the alert, make sure the first part of the URL is: http://themilliondollarway.blogspot.com.

Note the very important "the" in front of "milliondollarway."
Posted by Bruce Oksol at 12:10 AM No comments: