Minimal Blogging During Thanksgiving Week -- November 24, 2014; A Chart You Just Have To See From Carpe Diem 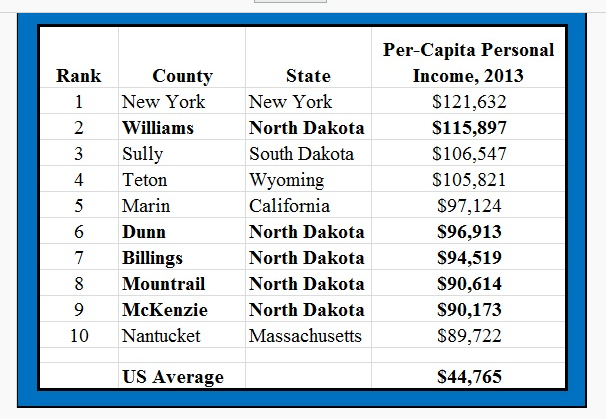 (Sully County has appeared on the list since at least 2012; it is located about 30 miles north of the state's capital; a lot of high-cost homes are going up along the river, according to a 2012 news article.)

Rigs are holding steady at:

MDU to buy North Dakota wind farm in Hettinger area. Link here.
From an August 25, 2014, post, this is 30-second sound bit for "cost of renewable megawatt":

Politics and other stuff. There may not be much Bakken stuff below this line.

Antarctica's ice paradox has yet another puzzling layer. Not only is the amount of sea ice increasing each year, but an underwater robot now shows the ice is also much thicker than was previously thought, a new study reports.

The discovery adds to the ongoing mystery of Antarctica's expanding sea ice. According to climate models, the region's sea ice should be shrinking each year because of global warming. Instead, satellite observations show the ice is expanding, and the continent's sea ice has set new records for the past three winters. At the same time, Antarctica's ice sheet (the glacial ice on land) is melting and retreating.

Warmists predicted this also. It was a footnote in one of Algore's PowerPoint slides.

Well, that didn't last long. I saw this coming about the time SecDef Hagel testified during his confirmation hearings. He was in way over his head. I wonder if he didn't show signs of some early memory problems. Headlines:
I assume that's why the market is down a bit today. LOL.


Obama is expected to officially announce Hagel's resignation today but doesn't plan to name a successor right away.

Remember when LBJ took on as his personal responsibility the targeting of North Vietnam? And history repeats itself. And Einstein's definition of "insanity" holds.

From The Los Angeles Times, "the White House threatens to put brakes on alternative fuels."


As biotech masterminds and venture capitalists scramble to hatch a new generation of environmentally friendly fuels that can help power the average gasoline-burning car, they are confronting an unexpected obstacle: the White House.

Yielding to pressure from oil companies, car manufacturers and even driving enthusiasts, the Obama administration is threatening to put the brakes on one of the federal government's most ambitious efforts to ease the nation's addiction to fossil fuels.

The proposed rollback of the 7-year-old green energy mandate known as the renewable fuel standard is alarming investors in the innovation economy and putting the administration at odds with longtime allies on the left.

Hagel abruptly resigns; White House considering a rollback of the 7-year-old green energy mandate; and now this -- a previously OMB budget analyst double-counts enrollees to pad ObamaCare numbers. And is caught. And is appalled. Certainly seems like the administration has its hands full -- and most of it seems self-inflected. Bloomberg is reporting:

The mistake was “unacceptable,” Burwell said in a memo sent to her senior managers yesterday evening, obtained by Bloomberg News. As an first step, she told them to convene meetings with staff to solicit suggestions to increase “transparency, ownership and accountability” at the 77,000-employee agency she runs.

The number of people signed up for health insurance is a key measure of success for the Patient Protection and Affordable Care Act. The health department acknowledged November 20, 2014, that it had double-counted about 393,000 people in dental plans when it announced that 7.3 million Americans were enrolled in August.

Enrollment was revised downward as a result, to 6.9 million in August and 6.7 million in October.

Wow, the number keeps dropping. Edging ever closer to my number (4 million).

Buffalo preparing for flooding.
Posted by Bruce Oksol at 10:26 AM No comments: