A huge "thank you" to the reader for alerting me to this. I doubt I would have found it on my own; if I had it would have been only through serendipity.

This is what the surrounding area looks like on the NDIC GIS map server: 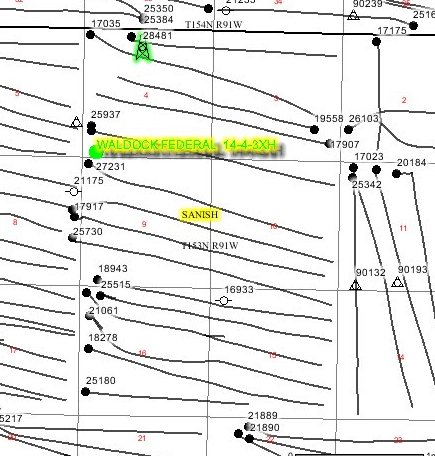 
I'll be off the net, possibly for several hours. I was going to ask my wife to fill in, but she had two questions:
Never mind.
Posted by Bruce Oksol at 3:58 PM No comments:

A reader sent me a link to this story. The Lincoln (Nebraska) Journal Star is reporting: Southwest Nebraska is experiencing a mini oil boom  --


Jim Gohl has seen oil booms before in Nebraska.

The early 1960s brought a big boom, and there was another one in the late 1970s and early 1980s, said Gohl, who lives in the Hitchcock County town of Culbertson and is a commissioner with the Nebraska Oil and Gas Commission.

What's happening in his neck of the woods these days could be the best thing to come along for the state's oil industry since the last boom ended.

"I guess this would be the next best thing since that," Gohl said.

While hydraulic fracturing, commonly referred to as fracking, is spurring oil booms in North Dakota, Texas, Colorado and Wyoming, the oil boom in southwest Nebraska is of the more traditional variety.

Companies are using a technique called three-dimensional seismic imaging, which bounces sound waves off underground rock structures to reveal areas that might contain oil and gas.

That allows oil companies to see previously hard-to-find deposits of oil.
Bill Sydow, director of the Oil and Gas Conservation Commission, said the 3-D seismic technique has played a big role in the increase in oil exploration and production in southwest Nebraska.

"The prices have helped, but I think the success of the 3-D is a big part of it," Sydow said.

Sydow did not have final statewide production numbers for 2013 as of last week, but he estimated there were around 2.8 million barrels of oil produced in the state. That would be a more than 10 percent increase over 2012 and the best year for oil production in Nebraska since 2001.

Pipelines? Who are they gonna call? TransCanada. LOL.
Posted by Bruce Oksol at 3:30 PM No comments:

Once the dust settles with regard to KMI, it might be something for some investors to ponder. Houston Biz Journal is reporting that KMI wants to be the biggest dividend payer in the energy sector:


By consolidating all of its companies into one, Houston-based Kinder Morgan Inc. is positioning itself to reduce its capital costs and become more aggressive in mergers and acquisitions, CEO, founder and billionaire Rich Kinder said Aug. 11.

Meanwhile, this reality being reported by The Wall Street Journal:


It is time to get used to near-zero savings-account interest rates and 10-year bond yields that don't get much higher than 3%.

Yes, the Federal Reserve is preparing to raise rates as soon as next spring. But even that won't produce the interest-rate "normalization" that many assume to be on the way.

That overdue reversion to the mean of recent decades—pined for by retirees and other risk-averse savers, feared by holders of higher-yielding bonds—isn't coming.

Blame it on the persistent sources of fragility in the global economy: banks that remain reluctant to lend to Main Street, a looming debt crisis in China and the alarming prospect that deflation will come to Europe's shores and return to Japan's.

Banks that remain reluctant to lend to Main Street? Blame Dodd-Frank, or is it Frank-Dodd, and the cash requirements banks are required to hold, the risks banks can no longer take, and the fines/punishment banks are subject to if they are found in non-compliance.

This was sent to me some time ago, but I am just now getting caught up. Houston Biz Journal is reporting the world's largest wind farm may be built in Wyoming:


Developers of a massive wind-power installation backed by Colorado billionaire Philip Anschutz have obtained permission from Wyoming authorities to build and operate what may be the biggest wind farm in North America.

With up to 1,000 wind turbines and a rated capacity of 3,000 megawatts, the wind farm will be the largest in Wyoming and one of the biggest in the world, according to the private company, which proposed the $6 billion wind farm in 2008.

So much for Wyoming's migratory bird population. The wolves and coyotes will be feasting.

Willistonites With Cardiac Pacemakers Should Not View This Presentation -- August 19, 2014

August 23, 2014: see first comment below with regard to the graphic below. The south end of 32nd Avenue "starts at" the new retail center, known as Sand Creek Town Centre. In the graphic below, the large oval circle, to be more accurately placed over SCTC (not to be confused with SCTV) should be moved slightly down and to the left. It's too much work to change it. The Williston Wire updates retailers that are/will be located there:

Starboard, a Dickinson retailer, has signed a lease to open a new clothing store in Williston, ND in the fall of 2014.

A reader, thank you very much, sent me this link on a proposal for a $135-million convention center in Williston: http://www.kxnet.com/story/26310563/convention-center-plan-in-williston.

Once I get up off the floor and back on my chair, maybe some comments. Maybe not.

In case the link is broken...

But the company wants local or state funds to pitch in another 35 million dollars for a convention center that would be the heart of the complex.

An official with The Prime Group in Chicago was in Williston today, pitching the idea to city officials and community leaders.

This is what John Breugelmans envisions for a new convention center complex on Williston's southwest side.

That's the convention center in the foreground, with the office building on the left and the 16-story, 300-room hotel on the right.

The facility would also include underground parking for 15-hundred vehicles along with retail space and a destination restaurant.

I knew my graphic would come in handy. The graphic at this earlier link shows a large oval, labeled "New Retail." This is about where Sand Creek is located, I do believe, but I could be wrong. If that is correct, then imagine the new Williston Convention Center inside this oval, with 1500-car parking lot under the coulee. 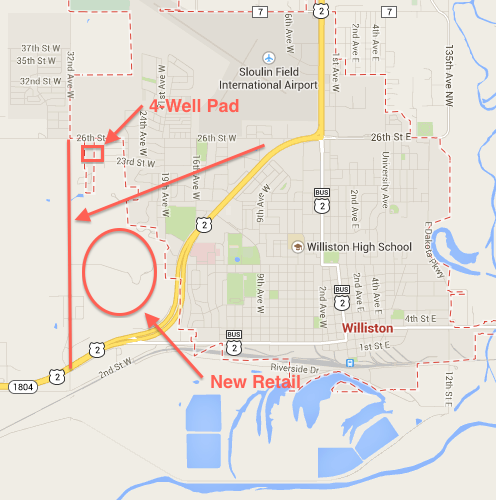 "New Retail" could be the location of the new Williston Convention Center. Or not.

By the way, the fireworks at the beginning of the video (linked above) was/were probably a bit much for conservative nature of most Williston Scandinavians.

I'm waiting for Donald Trump to make a counter-offer and a proposal for legalized gambling in Williams County.
Posted by Bruce Oksol at 12:03 PM 2 comments:


Halcon has chosen to focus their limited CAPEX dollars in the Fort Berthold area because these are by far the best they own with recent wells far exceeding the 801K EURs which they previously stated.

They like Williams County a lot, but at this time growing revenues and free cash flow is important. Halcon plans on selling entire company in next few years they need cash to de-risk their assets to sell. Actually Halcon had a presentation today you can access on their website, they are one of the best operators in the business. http://www.oilandgas360.com/togc-webcast/hk/

A huge comment; great comment. Thank you. Back to one-million-bbl EURs from an independent source. Regular readers are aware of the million-bble-EUR discussion. Mike Filloon was one of the first to note it publicly in a non-fee / non-subscription posting.

A reader posted this as a comment; to make it google-searchable, I moved it up here, maybe some readers can provide additional insight:


The reader noticed that HRC (Halcon) was just back in the area drilling a couple of Miller wells that were spudded late last year, the rig is now gone.

In the HRC's 2Q14 report (at their website) they said they were sending a rig to drill "two" wells in Williams county in July (the Miller wells).

They have finished those wells, but their rig is nowhere else in Williams county. They still have several wells to drill in the county with permits expiring soon. In the report Halcon they were also going from 4 drilling rigs to 3 drilling rigs. With the Miller wells complete, they are down to 3 rigs, all in Dunn county.

Last year they petitioned the NDIC to expand leases from 1280 to 2560 spacing units to drill up to 31+ wells on the new spacings...no activity. I know they "may" drill...but when?

What are they up to? Are they going to let the permits expire? Will they ever get back to Williams county in the near future?

I noticed that Crescent Point, Continental and Hess are active in the area.

I don't know Halcon's plans, but maybe another reader has some insight.

I assume the Miller wells referenced above are (3-well pad, 12-157-101, Otter field, Williams County):
I don't often see permits expire; they are easily renewable through the NDIC for a nominal fee ($100) and a cordial letter. Interestingly, I have seen some one example of an operator (Petro-Hunt) requesting an approved 2560-acre spacing permit to be changed to 1280 acres at a later date.
Posted by Bruce Oksol at 11:48 AM 4 comments:

IPs / status of wells coming off confidential list today have been posted.

The Ukraine: the top story -- things must have settled down in Ferguson.

Farther down the page: tensions flare again in Ferguson. Attorney General Holder will be out there tomorrow, probably carry this advice to the protestors AND the police/military: "Take your mind off your troubles and the troubles of the world, go golfing."

And yes, an orbital blow-out fracture can cause blindness, and even result in death from complications. It is a very, very serious injury.

Study: manmade quakes (assuming they exist) are must smaller, much less impact, than natural quakes. And who knows? Those little manmade quakes (if they exist) may release the tension preventing much bigger, devastating natural earthquakes. Who's to say?

Leonard Cohen has a new album out.
Posted by Bruce Oksol at 11:26 AM No comments: