I may not post much today; I'm in the Grand Canyon area and not sure how long I will be off the net.

Data below will have to wait to be updated; the wi-fi here at McDonald's is not fast enough to load anything in a reasonable amount of time.

As soon as I read that a new study concluded the Keystone XL will lower the price of oil by ... drum roll ... $3/bbl and that would .... drum roll ... create a huge increase in the consumption of oil, I knew the study was irrelevant and ... frankly, idiotic. The price of WTI dropped from $104 to $97 in the past few weeks (well more than $3/bbl) and the drop in price had nothing to do with pipelines.

And, just for argument's sake: dropping the price of oil is now a "bad" thing. Okay.

Be that as it may, the oil sands will be developed  and if the Americans don't want it/buy it, the Chinese will. More than enough pipeline and rail to transport Canadian oil exists or will exist over the next few years with/without the Keystone.
Posted by Bruce Oksol at 1:37 PM No comments: Links to this post

Later, 10:39 a.m. PDT: I have also updated the production numbers for all of the wells that EOG permitted/drilled in 2007.  At that link, scroll to the very, very bottom.

As you scroll through the data, keep in mind some of these data points:
In addition, over the next few months, EOG is going to report a large number of additional incredible Wayzetta wells. For example, just one such well that will soon be reported. This one is still on DRL status but has produced 124,000 bbls of oil in less than 3 months:

Posted by Bruce Oksol at 12:15 PM No comments: Links to this post

September 1, 2016: unimportant story in big scheme of things, but helps me with picture of the Piceance. Apparently WPX drilled a horizontal "through" Encana property to get to WXP mineral acres. WPX says they are not targeting any Encana oil. Encana does not comment on that. Encana's beef, calling this a "trespass well": Encana cannot drill its own well in the area because of 300-foot setback rules. Went to court in June, 2016; no update found. My hunch: ends "amicably." Court will waive 300-foot setback if Encana provides reasonable "avoidance" plan in drilling new wells.

September 23, 2015: random articles on the Piceance; most of the articles are a bit dated.

A reader sent me an article this morning that reminded me that I haven't been keeping up with the Piceance Basin. I also noted that I don't have it linked at the sidebar at the right along with the other oil and gas plays in North America.

So, a placeholder for Piceance begins here.

First, before we get too excited about the Piceance: remember the Piceance in Colorado. The old joke around western Colorado goes like this: Oil shale is the fuel of the future…..and always will be.

I haven't followed this year's Democratic political debate in Colorado, but it's been the headline news for quite some time. I don't plan to follow Colorado politics either; time will tell whether the Piceance will be developed.

Some perspective: although some opine that the Bakken Pool in the Williston Basin (North Dakota only?) could be a 1-trillion-bbl reservoir, and the Leigh Price suggested as much as 500 billion bbls, the consensus is that it will ultimately come in lower than that. Be that as it may, what about the Piceance?

Wiki obtained that from a 2009 USGS re-assessment of the Basin:

The richest resources are in townships 1 and 2 south, ranges 97 and 98 west with a combined total of nearly 286 billion barrels of oil in place.

I assume, just like the Bakken, there are too-many-too-follow/too-many-too-mention operators in the Piceance, but a quick search suggests Encana and WPX might be a couple of stories to follow in western Coloroda.

According to an Oil & Gas Journal article:


In the Piceance basin, Encana owns 869,000 net acres bounded roughly by Rangely, Grand Junction, Rifle, and Meeker, Colo. More than 70% of the lands are undeveloped. 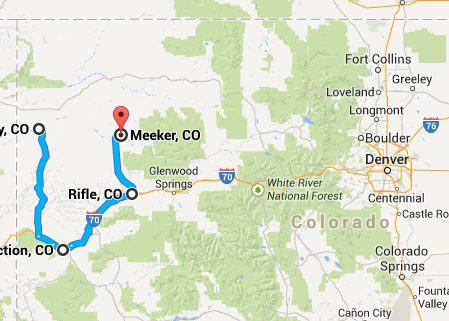 The bad news for operators looking to target the Piceance: look at all that green. Might as well be "red." However, the good news is that I don't see any green in the area that Encana says it "owns."

Here is Encana's Piceance position from the OGJ article:


At its current pace, Encana has a 35-year inventory of drilling locations in the Williams Fork formation alone.

"Our capacity-reduced production from 2009 came back on line better than expected, and many of the Piceance wells that we've recently completed are performing well above expectations," Wojahn said.

Using what the company calls a "gas factory" approach, Encana has drilled as many as 52 wells from a single pad in the Piceance basin.

"I am proud to say that in just a few short years, the Piceance gas factory has progressed from the conceptual stage to full implementation…. Since 2005, Encana has reduced its drilling cycle times by as much as 65% in some areas of the Piceance basin."

Encana is expanding the use of its Piceance gas factory approach throughout the company's operations to gain efficiencies. Those include sharply reducing truck trips in the field, fewer pad-to-pad rig moves, shorter drilling and completion cycle time, and optimizing frac efficiency and production via gas lift.

Without giving details, Wojahn said Encana is diversifying its supplier base and is engaging industry players to develop fit for purpose completion equipment.

I don't follow the natural gas industry very closely, so it came as a surprise to read that Encana is #2, behind ExxonMobil, in natural gas production in North America, according to that same article.

Meanwhile, late last year, WPX announced it would form an MLP in the Piceance.

Using the search app in the blogger app, one can easily find a number of Piceance/WPX stories.
Posted by Bruce Oksol at 10:58 AM No comments: Links to this post