CLR will name two wells "Hereford" wells and two wells "Buelingo" wells. Of course, I am familiar with Herefords, but the "Buelingo" is new to me. I am truly embarrassed to say that I had seen these cattle often but never thought of asking what they were called. They are very, very distinctive.


The BueLingo breed of beef cattle was developed in Ransom County, North Dakota, on the Bueling Ranch, by Russell Bueling and R. B. Danielson of the Animal Science Department of the North Dakota State University at Fargo. It is similar in appearance to the Dutch Belted breed of dairy cattle. BueLingo cattle usually have a white belt around the stomach area.

The "buelingoes" even have their own web page.

Slawson has a history of selecting awesome names for its wells, as does Samson Oil & Gas. Harold Hamm frequently has interesting names, albeit a bit more subtle.
Posted by Bruce Oksol at 10:48 PM 2 comments:

.... flying oil from the Bakken to the east coast refineries.

Rumor has it BNSF is moving cargo planes to a staging point to start flying oil from the Bakken to refineries on the east coast if it comes to that ... video taken along the Loup River, northwest Nebraska, April 28, 2014....


A Wing and a Prayer: Crude-by-Air (CBA) 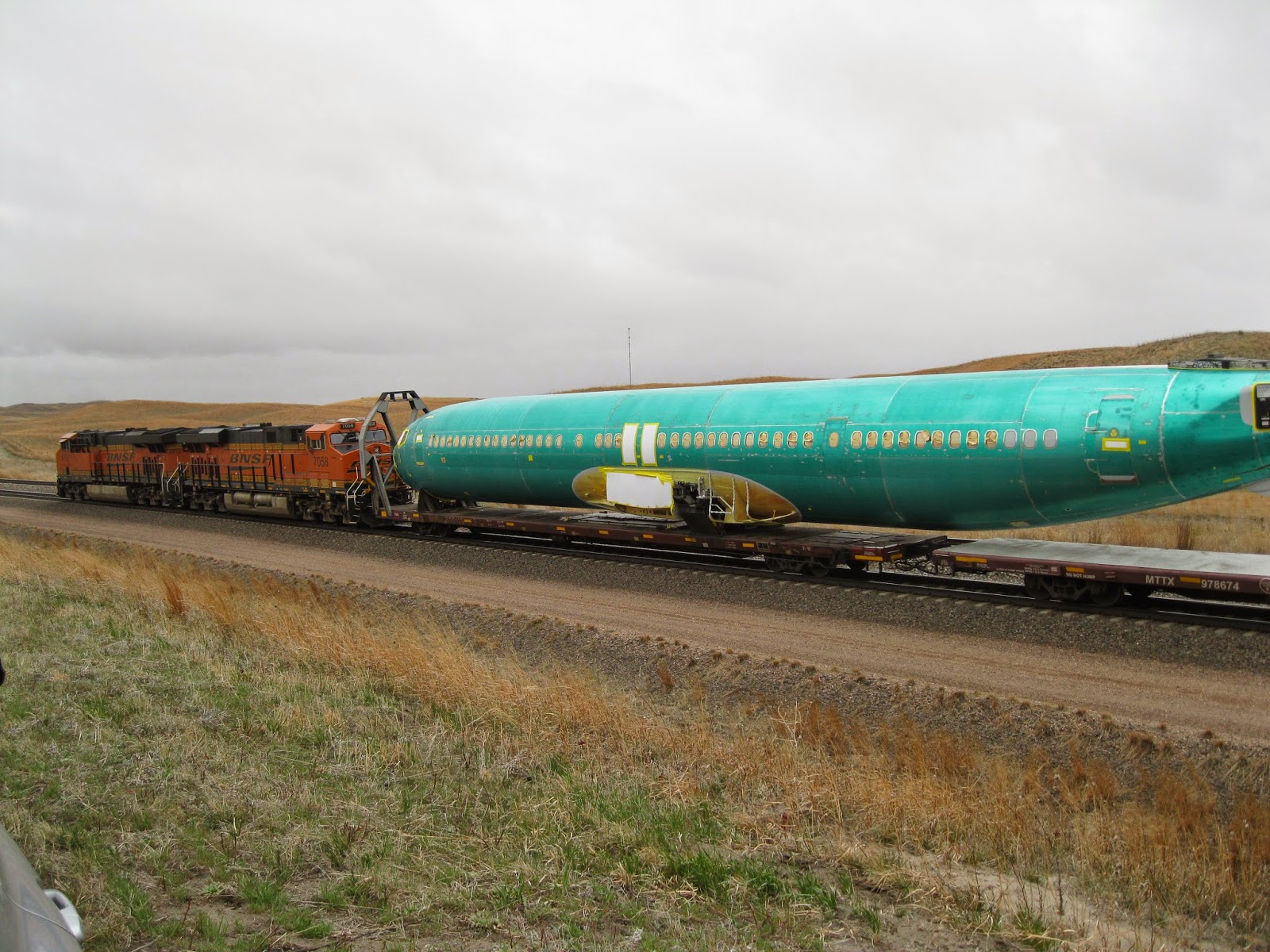 It has also been suggested that the First Lady is getting ready for another vacation.
Posted by Bruce Oksol at 10:23 PM 2 comments:

Email ThisBlogThis!Share to TwitterShare to FacebookShare to Pinterest
Labels: LodgepoleNorthOfWilliston


Eleven (11) new permits --
Wells coming off the confidential list over the weekend, today, were posted earlier; see sidebar at the right.

KOG And Flaring; Some Dots To Connect; WMB Suspends Investment In NG Pipeline From The Marcellus-Utica

In this Motley Fool article, the contributor is bullish on KOG, but doesn't mention the flaring issue.

By the way that second Motley Fool article says:


Whether you trust him or not, Continental Resources does control 1.2 million net acres in the Bakken and was also the first company to discover the Parshall shale in North Dakota.


Co provided an update on Q1 2014 production and operations. Summary Highlights Sanchez Energy reported Q1 2014 production of ~1,691 MBOE (18,784 BOE/D), an increase of 376% compared to the same period a year ago Reported production volumes consisted of 72% oil, 15% NGLs, and 13% natural gas Current production is ~21,000 BOE/D with 13 gross wells in various stages of completion. Operating in the Eagle Ford and the TMS.

Williams Cos suspends investment in Bluegrass NGL Pipeline due to insufficient customer commitments: Co announces it has suspended capital investments in the Bluegrass Pipeline, a proposed natural-gas-liquids project, primarily in response to an insufficient level of firm customer commitments. The company continues to engage in discussions with potential customers regarding the scale and timing of demand for services and the required firm contractual commitments that would support any future capital investments.
Natl Oilwell Varco beats by $0.01. Stock down 7% -- investors not happy.

Evidence the economy continues to struggle? Briggs & Stratton sees FY14 EPS lower than consensus.
Posted by Bruce Oksol at 10:02 AM No comments:

Look at all the jobs President Obama private enterprise is bringing to Texas. FuelFix is reporting:


SAN ANTONIO — The voestalpine Group will break ground this week on a $740 million plant at the Port of Corpus Christi.

The plant on the north shore of Corpus Christi Bay will use iron ore to make briquettes that will be shipped to European auto plants. Hot-briquetted iron, or HBI, is a primary material for raw steel making.

The voestalpine manufacturing plant will be powered by natural gas and is part of a wave of industrial investment at the port. The emergence of a cheap, reliable source of natural gas in the Eagle Ford Shale has drawn billions of dollars in projects to the Corpus  Christi area.

The voestalpine plant will create about 800 construction jobs and 150 full-time jobs, the company said.

It takes a village.

Equities up strong in early morning trading; oil up slightly.

XOM, COP, CVX: up strong; at or near 52-week highs
Bakken operators: mixed; CLR up nicely; others down slightly
ENB, EPD: up slightly
MDU: flat to down slightly
BRK-B: down slightly
Posted by Bruce Oksol at 9:56 AM No comments:

Fifty five thousand railcars built to the new standards are currently on back-order. The directive could constrain rapidly developing Canadian crude by rail shipments to the US - currently running at about 250 Mb/d according to an April report by Peters and Company.

Increased use of crude-by-rail is driven by pipeline congestion out of Alberta - a situation the latest Keystone pipeline delay appears to make worse.    Today we review unit train options out of Western Canada.

The last episode in this series distinguished between oil sands producers that are able to deliver their bitumen crude to market direct from the production plant as pipeline quality dilbit via feeder pipelines and smaller producers that mostly do not have that luxury.

We pointed out that it is often more convenient for small producers to deliver their crude by truck to rail terminals because of the overhead costs associated with blending up their crude to pipeline specifications and securing scarce capacity on pipelines out of Alberta.

However, we also noted that such small producers are unable to justify shipping their crude on unit trains of 100 cars or more even though doing so would achieve economies of scale. Until these smaller producers are able to ramp up production and invest in improved infrastructure, they are essentially price takers. This time we look at increased unit train options available to larger producers.


Nevertheless it seems that larger oil sands producers are willing to go ahead and ship dilbit by unit train just to get their crude to market, regardless of the diluent penalty. The fact that a number of these producers have made long term commitments to Alberta rail terminals on that basis is a good indication of just how constrained the pipeline systems out of Western Canada have become. The recent Keystone decision delay underlines the reality that pipeline congestion could continue for some time. So even though the new rail car regulations will increase rail costs, producers have little choice but to pursue rail alternatives.

Detroit's many creditors inch toward vote on plan. The city has more than 100,000 creditors.

Missing out of Marcellus riches.


Nearly 15 million people in New England live within driving distance of America's biggest natural-gas field, yet heating and electricity prices reached a record for the region this winter.

As states stretching from Massachusetts to Maine thaw out from bitter cold, questions linger about why New England hasn't benefited from the energy boom in the nearby Marcellus Shale. The short answer is not enough pipelines.

And the reason is an impasse between pipeline operators and power plants over how to pay for new capacity.

The problem is that pipeline operators want long-term contracts in place before they spend the hundreds of millions of dollars necessary to build a new pipeline or expand an existing one. But power companies, which buy gas to fuel generators on a need-to-have-it basis, work on a different timetable. Independent power-plant operators must supply electricity to utilities at the lowest cost possible, and utilities are restricted in the extent to which they can pass on costs to customers.

The result is that the power industry long has been wary of getting locked in to long-term contracts with higher prices than necessary.

Regulators are proposing a tax to bridge the gap.

Microsoft browser has security flaw. I have never used IE on my personal computers. A security hole in Microsoft's IE -- the default web browser for many -- could be particularly troubling for those still running Windows XP.

Governor Perry with bragging rights. Toyota to move jobs and marketing headquarters from Torrance, Los Angeles, CA, to Texas.
Posted by Bruce Oksol at 9:18 AM No comments: