Preview Of North Dakota Trust Lands Sale In May

A big "thank you" to a reader for sending a preview of the North Dakota trust lands sale coming up in May, 2014. PN Bakken is reporting:


After declining to an 11-year low in February, the number of nominated acres for the May North Dakota Department of Trust Lands oil and gas lease auction rebounded seven-fold; however, as with most of the recent Trust Lands auctions, a majority of the nominated acres are outside the traditional Bakken petroleum system core area.

A total of 18,133 acres in 221 tracts were nominated for the May auction, up from the 2,552 acres leased in the February auction, although all of the nominated tracks still have to be vetted by a variety of North Dakota agencies. Of those 18,133 nominated acres, 3,479 acres, just 19 percent, are in the traditional Bakken system counties of Divide, Dunn, McKenzie, Mountrail and Williams. The remaining 81 percent of the acres are either on the fringe or outside of the Bakken petroleum system and extend from Renville to Bowman counties.

I'm actually looking forward to what the fringe might bring.

The link was originally posted over at the discussion group.
Posted by Bruce Oksol at 10:12 PM

Niobrara Better Than The Bakken On "Per-Section" Comparison -- Whiting

This link was posted by a reader over at the discussion group; a huge "thank you." This is a great story. PN Bakken is reporting:

Whiting chief executive James Volker, in an April 7 keynote address to a meeting of the Independent Petroleum Association of America, IPAA, in New York, repeatedly touted the company’s Redtail prospect, even opening the luncheon presentation with a new video illustrating the technology that led to its discovery in Weld County northeast of Denver.

“Ladies and gentlemen, that was a true 3-D picture of the matrix of the Niobrara B formation,” Volker said, referring to it as “the so-called sweet spot out here in the Niobrara.”

“So, in the next five years, we’re really going to get after it,” he vowed.

Within the initial 2014-18 development timeframe, Volker added, Whiting plans to drill over 1,000 production wells, or roughly a third of some 3,300 drilling locations thus far identified on Whiting’s 120,000-acre Niobrara leasehold, situated in the Denver Julesburg Basin, in an area known as the Colorado Mineral Zone.

From my perspective, the Niobrara has not lived up to the hype. Hopefully this time is different. I'm really looking for an exciting Niobrara play from Whiting.

And, again, a big "thank you" to the reader for sending the link.

The link was originally posted over at the discussion group.

By the way, I spoke on this very subject -- the Niobrara and the recent Whiting presentation just a few days ago when I blogged: 16 wells on a 960-acre drilling unit, and none of them will be dry.
Posted by Bruce Oksol at 10:04 PM

More Snow For Montana; More Water For Lake Sakakawea -- Will This Winter Of Global Warming Ever End?

Yesterday I noted that the US Army Corps of Engineers releases enough water from Lake Sakakawea in 14 hours to frack every Bakken well that will be drilled this year.

Now, even more snow for Montana is predicted -- and when it all melts, most of it flows down the Yellowstone and the Missouri, to end up at Lake Sakakawea, adding to even more USACE run-off.

IceAgeNow is reporting in big block letters so it won't be missed:

* TIMING…SNOW WILL DEVELOP BY EARLY THIS AFTERNOON AND BECOME HEAVY AT TIMES THROUGH SUNDAY MORNING. THE SNOW WILL TAPER OFF SUNDAY AFTERNOON.

* SNOW ACCUMULATION MOUNTAINS…1 TO 2 FEET OF SNOW LIKELY. HEAVIEST ACCUMULATIONS WILL OCCUR OVER THE NORTH AND EAST FACING SLOPES.

That's truly a sad state of affairs when a scientific report has to be "politically correct." Before it could be released, the UN report on global warming had to be "balanced," had to take politics into consideration.

The National Geographic cover of the drowning Statue of Liberty probably did more than anything else to destroy the integrity of that organization. I was quite appalled. 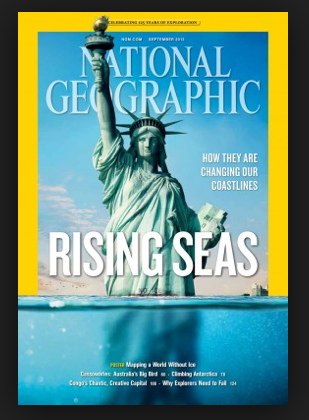 That National Geographic cover was a truly a cartoon of epic proportions.

Now, the AP plays into the same ruse: "UN climate report balances science and politics." Why not simply the "truth"?


"It's not pure science and it's not just politics," but a blend of both, Rayner said.

In Berlin, the politics showed through in a dispute over how to categorize countries in graphs showing the world's carbon emissions, which are currently growing the fastest in China and other developing countries. Like many scientific studies, the IPCC draft used a breakdown of emissions from low, lower-middle, upper-middle and high income countries.

Some developing countries objected and wanted the graphs to follow the example of U.N. climate talks and use just two categories — developed and developing — according to three participants who spoke to The Associated Press on condition of anonymity because the IPCC session was closed to the public.

The US representatives suggested hiding "facts" in footnotes and really, really small print.

Russian representatives, I assume, disagreed about the map. The Crimean now belongs to Russia, not the Ukraine.

I can't wait to see the cover of the report: I assume the water will be up to Ms Liberty's nose this time.

Just think how much "good" science could be reported if folks were interested in explaining things scientifically rather than what is "politically correct."

By the way, one of the unintended consequences of the UN's focus on global warming: all the money is being sucked up by "warmists," leaving very little money for other pet projects favored by various UN agencies. The UN is hoping that dialing back on "global warming," they can spread the wealth to other pet projects. Unfortunately, the "warmists" are used to all that money and are not going to give it up easily.

Tiger Woods did not start. Phil Mickelson did not make the cut.  Twenty-year-old Jordan Spieth could take record from Tiger Woods: youngest player to win the Masters.

Based on the comments, it is obvious that folks have no idea how much money is out there; how incredibly rich the ultra-rich are and how they will be more than willing to buy these watches. Apple never goes halfway. I have opined often that Apple's core business is fashion, not technology.  The rich are buying Teslas regardless of the cost or practicality. Likewise, EVs are priced way out of range for an but the wealthy. Apple knows what they are doing.
Posted by Bruce Oksol at 3:28 PM

Flaring
The reservation is the center of Bloomberg's attention on flaring

Jobs in the Bakken
New website for prospective Bakken workers

Fracking
Plenty of water in western North Dakota for fracking

Miscellaneous
The Bakken, not the federal government, responsible for resurgence in domestic oil and gas industry
Huge population growth in shale boomtowns
As many as 120,000 wells might be needed in the Bakken; drilling for 60 years
The Bakken won't be replicated outside of North America
Wood Mackenzie report on the Bakken
North American shale revolution is "for real"; won't be easily duplicated elsewhere

For investors only
Blackstone invested in the Bakken
WTI over $104/bbl
Whiting USA Trust 1 nearing its end
Oil prices surge; no reason given
TPLM update; analysts up target on EOG

Rhode Island pension deal falls apart. A fight over Rhode Island's 2011 pension overhaul is headed to trial after a tentative agreement between state officials and public-sector unions to soften the law collapsed Friday.

US help for Kiev (the Ukraine) comes with caution. The Obama administration and NATO face a quandary as they try to showcase support for Ukraine's new leaders and reassure countries in Eastern Europe without antagonizing Moscow. I guess that means no talk of new "red lines in the sand" from the Obama administration. That was one strength Obama had: drawing lines in the sand.

It looks like Italy has an immigration problem of biblical dimensions. That was the exact wording of Italy's top naval officer. A record number of Mideastern and African migrants are fleeing their homelands; a record number 64,000 likely to reach Italy this year.

The Heartbleed bug that punctured the heart of the internet this week underscores a weakness in internet security: a good chunk of the internet is managed by four European coders and a former military consultant in Maryland. On top of this, it's my understanding that President Obama has decided to transfer operator authority of the internet from the US to the Europeans. He made that decision seemingly overnight; his dithering on the Keystone is now in its sixth year, or something like that.

Speaking of hackers (see Heartbleed, above), a federal appeals court on Friday vacated a high-profile 2012 computer crime conviction against Andrew Auernheimer in a ruling that dealt a serious -- but not fatal -- blow to the government's case against the 28-year-old hacker.

North Dakota legislators are considering financial assurance that retired wind turbines will be taken down; land reclaimed.  Sort of like requirements that the oil and gas industry has. Gee, what a concept.
Posted by Bruce Oksol at 1:17 PM