The economic data points are troubling: mortgage rates back down to record lows; two consecutive months of hideous jobs data; and, now this:


GM is running a national Presidents Day sale through February 28 at Chevrolet and Buick-GMC dealers that provides incentives of up to $7,092 on the 2014 Chevrolet Silverado and up to $7,588 on the 2014 GMC Sierra. The more generous discounts are being implemented just eight months after the redesigned trucks hit the market last summer.

Ford, whose full-size F-series pickup has been the best-selling U.S. truck for 37 years, is providing much lower incentives of up to $3,250 on its big trucks. The F-series is due for a major overhaul late this year.

But many Ford dealers are advertising much richer deals on the carryover 2014 F-Series, with discounts ranging up to $9,000.

The Bakken boom was about ready to take off, but not quite yet. It was 2006. A lot of wells were being drilled into the South Red River B back in 2005 and 2006. One can see a number of great South Red River B wells at the "monster wells" page. Here's one that has hit the million-bbl milestone and is still producing 4,000 bbls of oil monthly:

The issue is understood to affect as many as 25 of EdF's 58 nuclear reactors and was brought to ASN's attention by EdF. ASN continues to investigate and expects to be able to provide more information next week.

Maybe we will see the Paris Basin fracked sooner than later.
Posted by Bruce Oksol at 5:04 PM No comments:

Update On The MRO Powell Well Targeting The Tyler In Southwest North Dakota; Photos From A Reader

A reader was kind enough to send photos of the Powell pad.

I can never thank readers enough who send updates (and especially photos) -- it really helps a lot of folks who might be interested but have no way of getting out to the sites. Note: no pumper on site yet, so mixed signals.
I track these four MRO -Tyler wells here. 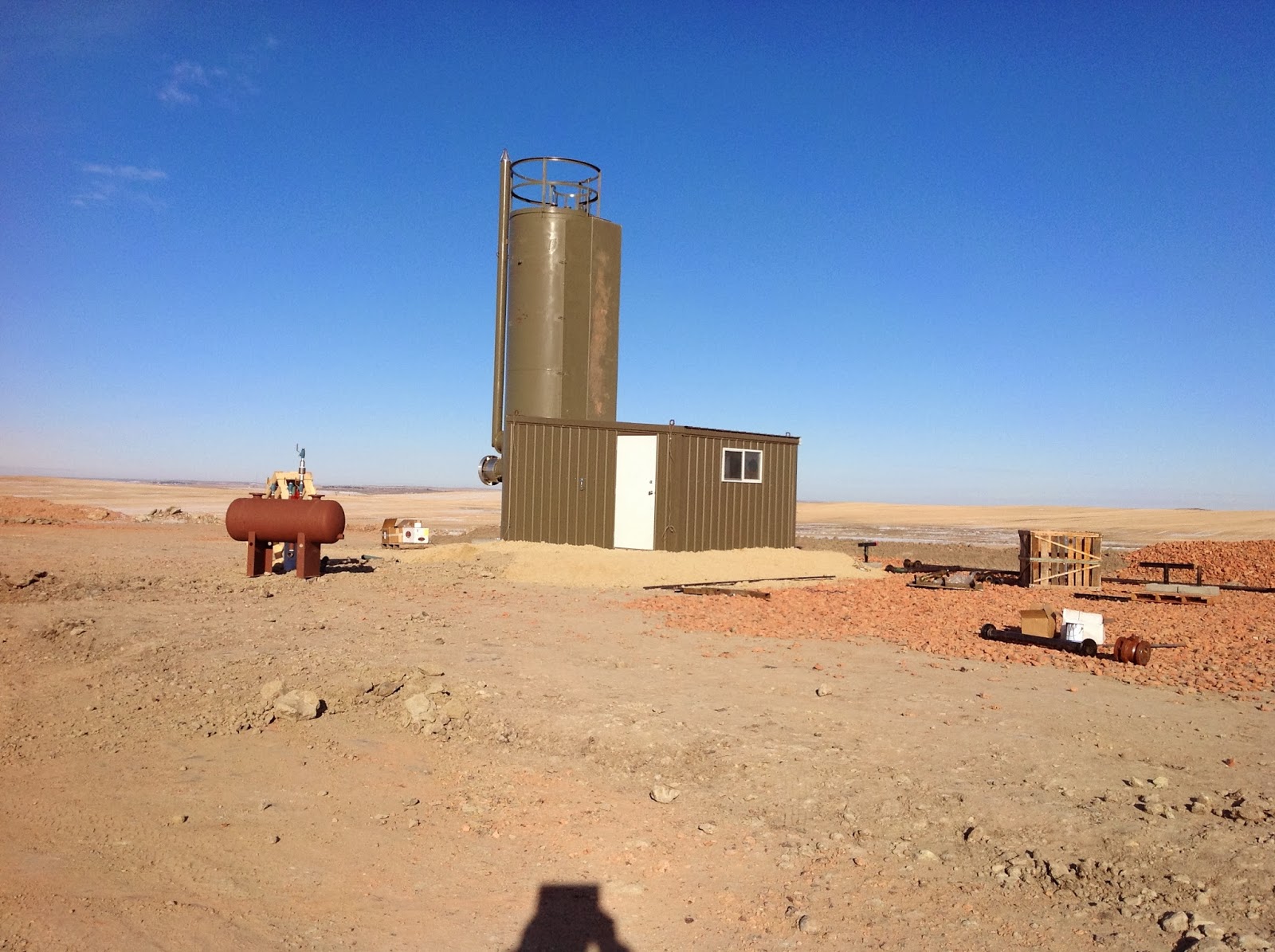 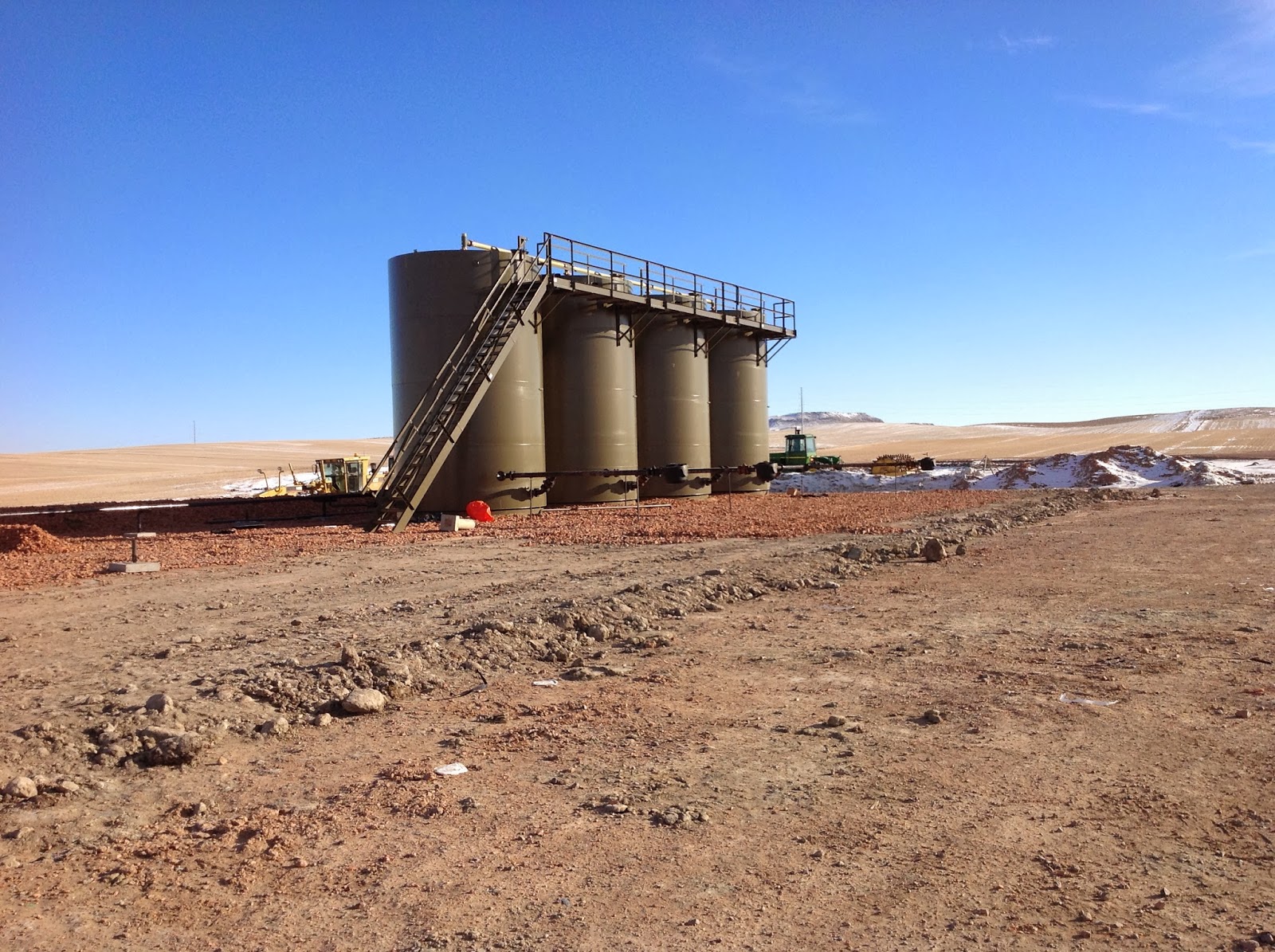 Note the heavy snow pack -- winter, 2014. This is not an atypical snow picture for North Dakota. "We" don't get as much snow as folks sometimes think. Certainly nothing like New England.
Posted by Bruce Oksol at 4:51 PM 2 comments:

The Minot Daily News is reporting:


Williston Target Logistics, a workforce housing provider, has completed the development of its Judson Lodge along U.S. Highway 2 west of Williston.

The first phase opened in October 2012, and the second phase has just been completed - bringing the total number of available rooms to 100. Liberty Oilfield Services will be contracting all 100 rooms.

This actually caught me by surprise; I was pretty much sure that new man-camps were a thing of the past in the Bakken, now that the boom is over (according to The Atlantic Monthly, in a story a year or so ago. I guess you can't believe everything you read).

I forget how I stumbled across this video for the first time some days ago.  Was it through Dragon Tattoo? I forget.


Summertime Sadness, Lana Del Rey
Posted by Bruce Oksol at 10:49 AM No comments:

Email ThisBlogThis!Share to TwitterShare to FacebookShare to Pinterest
Labels: Man-Camp

There is a lot of information in this story, linked below. Regular readers know the background. The government's actions are a dollar short and a day late. Remember, it was President Obama that killed the Keystone XL two years ago, and continues to dither.

Bloggers have noted since 2010 that North America is the new Saudi Arabia without the infrastructure. Where is all that wind energy? All that solar energy?

Anyway, I digress. Back to the story at hand, which is a huge, huge story. Note: the directive is for one week. I wish the government could respond to an emergency in one week; but the Obama administration expects private enterprise to turn on a dime.


Enterprise Products Partners LP (EPD) must prioritize propane shipments on a pipeline to the U.S. Midwest and Northeast, where cold weather has caused heating-fuel prices to climb, federal regulators ordered in the first use of their emergency powers.

The one-week directive issued late yesterday by the Federal Energy Regulatory Commission is effective immediately and applies to the Enterprise TE Products Pipeline system, which originates in Mont Belvieu, Texas.

The agency cited its authority under the U.S. Interstate Commerce Act.

Propane in the Midwest soared to a record premium over prices on the Gulf Coast last month as a polar vortex swept across the eastern U.S., dumping snow and ice and causing temperatures to plummet to record lows in cities from New York to Florida.

Supplies of the heating fuel in the Midwest tumbled to the lowest seasonal level since at least 1994.

“Clearly, it shows that the government is very worried about propane supplies throughout the Midwest and Northeast and not so worried about gasoline supplies,” said Andy Lipow, president of Lipow Oil Associates LLC in Houston. “You’ve seen the price of propane spike, and you’ve seen trucks running up from Texas through the Midwest for resupply and the weather continues to be cold.”

My hunch is that President Obama saw the Great Lakes frozen over yesterday when he was in the agricultural capital of America, East Lansing, Michigan.  And after putting down the camera for a selfie with him and Debbie Stabenow, he read the weather report. It ain't gonna get warmer for awhile. We're in the middle of an ASCE (an Algore Solar Complex Event).

It may be interesting to look at the 5-year graph of EPD, click on "events/dividends" and then compare to MDU.   EPD pays around 4%; MDU pays around 3%.


Him, Trailer
Posted by Bruce Oksol at 10:15 AM No comments:

Saturday Morning -- Now The Rest Of The News; From The Land Of Ice And Snow --Statoil And Peak Oil?

Yup, as I've said often: Keystone XL is Kerry's call. He will flip-flop at the last moment. And I have no idea on what foot he is standing today, his left foot or his right foot when it comes to the Keystone. I think Kerry knows that a speech with vision will prove him a statesman; on the other hand, simply saying "no" will forever mark him as a dud.

Disclaimer: this is not an investment site. Do not make any investment decisions based on what you read at this site or what you think you may have read.

China announces huge stimulus program. This will move the market.

Statoil to join other European oil companies and cutback on CAPEX for 2014:


Norway's Statoil became the latest European major to announce it would be keeping a lid on its capital spending plans in the short-to-medium term as it reported its fourth quarter results Friday.

Statoil said that it planned to invest an average of $20 billion per year between 2014 and 2016, which it said was approximately eight percent smaller than previously estimated.

Statoil's decision to keep a lid on capital spending comes after Royal Dutch Shell's announcement at the end of January that it would be making "hard choices" about new projects in 2014 and that it would be spending only $37 billion this year compared with $46 billion in 2013.

In October, BP said it would spend no more than $25 billion on capex in 2014 after having previously stated that it could spend as much as $27 billion.

Its move to limit capital spending suggests that Statoil will now struggle to achieve the 2.5 million barrels of oil equivalent per day (MMboepd) equity production that it had previously been targeting for 2020. The firm said that it delivered equity production of 1.94 MMboepd in 2013 (2012: 2 MMboepd) and that it now expects to achieve around three percent average rebased organic production growth between 2013 and 2016.

The very first story, the front-page headline story: slow jobs growth stirs worry. I pointed that out immediately after the numbers were released. The AP and Reuters both tried to ignore the story, or play it down. The Atlantic Monthly pointed out, again, that there are lies, damned lies, and statistics, or something like that -- a reader noted that; sent it in. The reader noted the government had the market on all three.

So, now The WSJ says the same thing. This is not Fox News, but the #1 newspaper in the United States reporting the story (I believe the WSJ is bigger than USA Today, but could be wrong).


A hiring chill hit the U.S. labor market for the second straight month in January, reflecting employers' reluctance to take on new workers despite some of the nation's strongest economic growth in years. U.S. payrolls rose a seasonally adjusted 113,000 in January after December's lackluster gain of 75,000 jobs, marking the weakest two-month stretch of job creation in three years, the Labor Department said Friday.

The soft hiring numbers join a recent cavalcade of mixed economic data on exports, housing and manufacturing. These trends, coupled with worries about emerging markets, have unsettled investors and stoked doubts about a stronger global recovery.

The latest data suggest weather may have slowed hiring in December, but not in January. A Labor Department analyst said last month's weather effects were consistent with other Januarys, a month that tends to be cold and snowy.

The health law has curbed hiring at Pita Pit USA Inc.'s 220 sandwich shops, said Peter Riggs, a vice president at the Coeur d'Alene, Idaho, firm. "We're not quite sure what the unintended consequences of the Affordable Care Act will be," he said. "We have an ongoing commitment to the people we've already hired, but we're more wary than in the past about hiring too many new people."

Handbook for North Dakota mineral owners
Available on the web

I-98
The pilot episode
The trailer
Background
Posted by Bruce Oksol at 9:31 AM No comments: