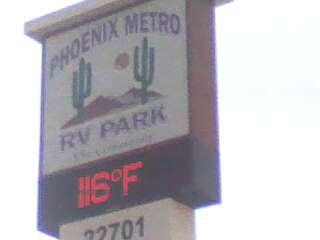 Owner/operator of the Phoenix Metro RV Park, Larmon Haugen, says he enjoys the blog, and invites y'all to stop by and visit if in the Phoenix area.

It's dry heat, so it doesn't feel all that hot, they tell me.
Posted by Bruce Oksol at 8:05 PM No comments:

Fracking, Politics, And Pennsylvania -- An Important Story To Follow

Rendell asserted that John Hanger and Kathleen McGinty, both former secretaries of the state Department of Environmental Protection, are the state’s “biggest environmentalists” and noted “both approved of fracking, permitted it and moved to put in place changes that have dramatically reformed the fracking process.”

The bottom line is the race for the Democratic Party’s gubernatorial nomination will be anything but boring. Most state’s environmental groups passionately oppose fracking while many labor unions and business groups support it with enthusiasm. Urban area voters, many concerned about possibility of drilling in their backyard, are generally opposed, but many rural voters who profited from royalties and leases support it.

My hunch: the mineral owners are in deep trouble.  Class warfare. Demagoguery. The haves vs have-nots. Fear-mongering. Dimock.
Posted by Bruce Oksol at 10:43 AM No comments:

Email ThisBlogThis!Share to TwitterShare to FacebookShare to Pinterest
Labels: Fracking_Pennsylvania

Check out this post first, posted earlier this morning, about homebuilding in Carpio and some Madison oil activity in the general area.

Lake Darling is a very irregular-shaped field, about 25 miles northwest of Minot.

Then this: never underestimate the Madison.

About six miles north of Carpio,
A well drilled in almost the exact location a few years has been mildly successful:
Should folks be excited about this area? I'll let the reader decide. Less than five miles to the east of these two wells is this one:
This well has been producing since 1972, was a simple vertical well, and has produced three-quarters of a million bbls of oil.

In this morning's edition of "links and news" I noted a WSJ book review regarding Dracula.


... did most of his research and writing while on holiday, holed up in the public library at the Yorkshire seaside town of Whitby. The thin historical background to the character appears to have been stitched together from a handful of references. From an article on Transylvanian superstitions, Stoker took both his setting and various details of vampire lore, including the tradition that the creatures are best killed with a stake through the heart. He invented other tropes, not least the inability of a vampire to cause a reflection, cross water or endure sunlight.

I had the wonderful fortune to actually spend a full day at Whitby, Yorkshire, some years ago.

A friend and I walked the English coast from Robin's Hood Cove (north of Scarborough) to Whitby.  It must have been a 15-mile trek along the very tortuous coastline. After walking about two hours, and very, very tired, we came across a Yorkshireman, and asked about Whitby. He said we were almost there. It was another two hours of walking.

Coming back, we took the main road, back to where we had parked the car -- that was a 5.5 mile walk.

At Whitby, I was also introduced to "jet" -- from wiki:


Jet is a geological material and is considered to be a minor gemstone. Jet is not considered a true mineral, but rather a mineraloid as it has an organic origin, being derived from decaying wood under extreme pressure. The jet found at Whitby, England is of early Jurassic (Toarcian) age, approximately 182 million years old.

Jet as a gemstone was fashionable during the reign of Queen Victoria, during which the Queen wore Whitby jet as part of her mourning dress. Jet was associated with mourning jewellery in the 19th century because of its sombre colour and modest appearance, and it has been traditionally fashioned into rosaries for monks.

I bought a small Whitby jet Christian cross for our younger daughter who, at the time, had spent several successive (and successful) summers as a missionary in Africa and Peru. I wish I had bought much more Whitby jet at the time as gifts or as artwork for our apartment walls, but I was already transitioning into my downsizing lifestyle.

Speaking of which: I updated my new address with my insurance company with regard to rental insurance. The agent asked if $75,000 was enough coverage for personal property. I had to laugh. I had trouble, as I looked around the one-room apartment, to think if I could come up with $50,000 in personal property. A tenth of $50,000 might be closer to what I really need.
Posted by Bruce Oksol at 10:03 AM No comments:

What's Wrong With This Picture? 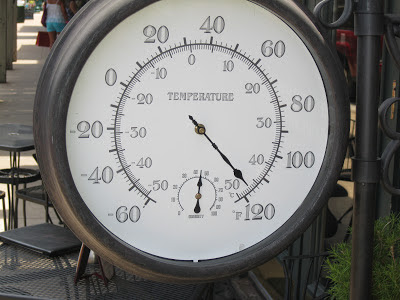 I think the thermometer above needs to be re-calibrated. The weather service reported 102 degrees, not 118 degrees.

Earlier this week I noted it will be interesting to see the outcome of a cluster of wells northwest of Minot.


Wildcats between Norma oil field and Smith oil field about 35 miles northwest of Minot:
These are vertical wells, probably targeting the Madison.

Today, of all things, Don sent me a Dickinson Press story on building activity in Carpio, just a few miles southeast of these wells.


Work will begin this summer on a housing development that could more than double the size of this small town on the outskirts of the Oil Patch.

Eagle Homes, a residential developer based in Illinois, is building 148 lots in Carpio, which had a population of 157 in 2010.

The project, which will get underway this July, is geared to provide affordable housing for families, said Ken Wisniewski, principal of Eagle Homes.

North Dakota’s oil boom is fueling a demand for workers, but a lack of affordable housing continues to be a challenge for workers and companies trying to fill jobs. 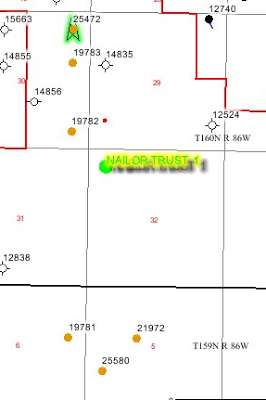 Above: the cluster of Fram Operating wells, probably targeting the Madison formation. 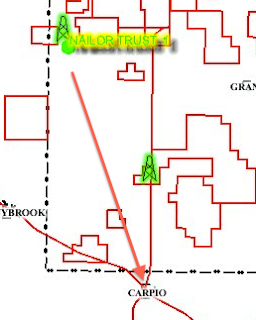 Pipelines
Enbridge and diluent
Random update of Enbridge
Koch Pipeline to build 250,000 bopd Dakota Express
EPP to ship diluent from Gulf Coast to Chicago-area to get it to Canada

Technology
The new science of fracking

Miscellaneous
Did we just kill the Red Queen?
Posted by Bruce Oksol at 8:22 AM No comments:

It must be a 100 degrees already here north of Dallas as I walk from the new apartment complex to Starbucks, my wi-fi source until I get connected at home. I will put that off for awhile because I will be traveling again.

As I was saying: it's hot. So the photo of the ice drink in today's WSJ was inviting. It seems a bit complicated to make; I'll stick with rum and Diet Coke. But with that, I will move on. The Off Duty section just doesn't excite me like it once did.

On to Review. And what a way to start: a review of Outlaw, by Michael Stressguth, 297-page biography of the outlaws: Waylon Jennings, Willie Nelson, and Kris Kristofferson. An excerpt of the review:


The musical influence of the Lone Star State, and the rebellious spirit of the 1960s counterculture, play lead roles in "Outlaw," a riveting look at how three Texans joined forces to liberate Nashville from its company-town ways in the 1970s. It is a small group portrait, tightly focused and well told by Michael Streissguth. The so-called Outlaw movement made Waylon and Willie into household names and put country music in the fast lane.

By the late 1960s, Waylon Jennings and Willie Nelson, as well as Kris Kristofferson—the third member of Mr. Streissguth's trio—had reached middle age with only limited success in Music City, where rhinestone cowboys and hayseed crooners purveyed the slick Nashville Sound. Veterans on the RCA label, Waylon and Willie were stifled by the era's assembly-line methods. Producers chose the songs and arrangements for studio musicians, a far cry from the days when Hank Williams recorded his lovesick blues with the Drifting Cowboys, the same tightknit group that he toured with.

And then another biography: this time of Count Dracula, Who Was Dracula, by Jim Steinmeyer, 319 pages. It would have been nice to see a snappier title to this book, perhaps the County of Whitby. An excerpt:


Speculation about possible sources for "Dracula" is equally inviting because there are relatively few on record. The Dublin-born Stoker wrote the novel—his fifth—while managing London's Lyceum Theatre, which was owned at the time by the fêted actor Henry Irving.

Fiction was strictly a sideline for Stoker, whose working days were dedicated to realizing Irving's flamboyant ideas for productions in which to showcase his talent. Irving could be demanding, as well as arch and imperious, and although Mr Steinmeyer does not quite say so, it's tempting to wonder if Stoker based Dracula's rather camp courtly mannerisms—not to mention his knack of draining his underlings of their vitality—on his employer.

Work on the novel, which began in 1890, was necessarily slow. Stoker did most of his research and writing while on holiday, holed up in the public library at the Yorkshire seaside town of Whitby. The thin historical background to the character appears to have been stitched together from a handful of references. From an article on Transylvanian superstitions, Stoker took both his setting and various details of vampire lore, including the tradition that the creatures are best killed with a stake through the heart. He invented other tropes, not least the inability of a vampire to cause a reflection, cross water or endure sunlight.

Business & Finance leads off with this: investors dump RIM shares, and asks the question, "is this the end of the PlayBook Tablet?

I can think of several comments here, but I will simply note the headline, and link it: Japanese toilet maker Lixil buys American Standard.


Originally designed to be a low-cost plane costing about $40 million a copy, costs have grown to about $122 million each for the Air Force version. The Pentagon estimates that the unit cost eventually will decline to $92 million.

But some officials worry that any cuts to the size of the program, or too long a delay, will drive up those unit costs, putting the entire program in danger.

The plane has encountered cost overruns, developmental delays and questions about the reliability of its technology.

There are a lot of great Opinion pieces today. I have time to link one: the climate speech Obama didn't give, Holman W. Jenkins, Jr.
Posted by Bruce Oksol at 7:56 AM 2 comments: