new permits --
Wells coming off the confidential list were posted earlier; see sidebar at the right.

Even if you cannot attend, you can access presentations on-line. (But you will miss the golf outing.)

The site is linked at the sidebar at the right until after the conference concludes.
Posted by Bruce Oksol at 3:57 PM No comments:

Federal Fracking Rules To Be Announced This Afternoon -- Platts


The rule proposed Thursday relies on an online database used by Colorado and 10 other states to track the chemicals used in fracking operations. FracFocus.org is a website formed by industry and intergovernmental groups in 2011 that allows users to gather well-specific data on thousands of sites.


US Interior expected to release new version of fracking rule for federal and Indian lands at 3 p.m. EDT.

No link provided.
Posted by Bruce Oksol at 12:34 PM No comments:

North Dakota #1 In Economic Performance -- US Chamber of Commerce; Texas Comes In Second

Carpe Diem is reporting:
Iowa is perhaps the most surprising to make top ten. Farming, cattle, ethanol, wind?
Posted by Bruce Oksol at 11:13 AM No comments:

Jobless Claims: Highest In Six Weeks -- Wow, What Was Not Mentioned In The Headline -- How High The Number Jumped; Truly Incredible: If I Had Television I Could Hear The Administration's Spin

I apologize. There were a lot of typographical errors in the original post. I think I have corrected most (all?) of them. I am pretty exhausted from the move (which continues) and warned folks I would likely make mistakes. No factual data incorrect; most of the errors were grammatical errors.

Later, 11:00 a.m.: I am quite surprised at the market today. The jobs report was about as bad it gets: a) jobless claims jumped by 32,000 for no known reason; b) economists expect the 2Q13 GDP to contract even more than the 1Q13 GDP; and, c) housing starts were the lowest in five months. The market continues to respond positively. This suggests to me a) "the market" is getting used to the "new normal"; and, b) "the market" knows the numbers mean the Boss is not going to cut back on quantitative easing any time soon. In fact, with inflation moving away from his unofficial, unstated target of 2% there are folks who think the Boss will increase that quantitative easing. I think that's the first rule of investing: "don't fight the Fed."


More Americans than projected filed applications for unemployment benefits last week, which may raise concern the slowdown in economic growth is prompting an increase in firings.

Jobless claims jumped by 32,000 to 360,000 in the week ended May 11, exceeding all forecasts in a Bloomberg survey of economists and the most since the end of March, Labor Department figures showed today in Washington. A Labor Department spokesman said no state provided information explaining the surge in applications which was the biggest since the aftermath of superstorm Sandy in November.

Job dismissals need to keep declining to lay the ground for a pickup in hiring once companies see growth in sales. The lack of bigger gains in employment, at a time Americans are faced with a higher payroll tax, will make it harder for households to sustain spending, the biggest part of the economy.

This confirms my feeling that despite occasional good stories regarding jobs, overall things are not good. Horrible might not be too strong a word.

Anyone think Bernanke is going to ease on quantitative easing?

Someone asked a very interesting question yesterday. The Obama administration is quick to brag about all the success stories. One of the biggest success stories this year has been the surging stock market, Dow, S&P, and Nasdaq have all set new records. Has anyone heard Mr Obama brag about the success he has had getting the economy moving again, based on the stock market? Nope. Know why? Because his base, the 47% of Americans that will never vote for American economic success are not participating in the Wall Street surge.

This is simply not good.

I don't recall many times when initial jobless claims jump 30,000 or more. It usually happens after a major explainable, identifiable event, like a hurricane that wipes out the northeast coast. This most recent reporting period: nothing to explain the surge. And numbers are usually revised upwards one week later.

Benanke is concerned that inflation continues to fall. The unofficial, unstated target is 2%. It fell another 0.4 percent. Anyone think Bernanke is going to ease on quantitative easing?

Housing starts also fell more than forecast in April, to a five-month low.

I couldn't find any good news in the linked article. If you find any, let me know.

Interestingly, there was no mention of the 800-pound gorilla in the living room in that article: ObamaCare. That TrainWreck will hit in October. Just in time for Halloween. Appropriate. Order your costume now.

In way over his head.
Three scandals.
Jobs.
Economy expected to contract to 1.6% in 2Q13 after 2.5% growth in 1Q13.
Cue up Connie Francis. Yes, there is something to trickle down economics. and we're not getting any trickling. Maybe Krugman is right. The government needs to spend more money.

What are the worst states for the unemployed?


NGL
PADD 1 NGL storage requirements, June 24, 2013
Part 1, the first in a series on the basics of natural gas liquids, May, 2012
Part 5, last in the series on NGL production, storage, pricing, June 21, 2013
Part 4 in the series on huge NGL production, June 12, 2013
NGLs, Condensates, and Pentanes, Part 1: the US vs the World, Through the Looking Glass
Big surge comes to Whoville, Northeast NGLs to Increase Six Fold
Bakken NGLs production growth: the race is on and it looks like ONEOK is the winner

Canada: CBR vs Pipeline
CBR could be competitive in price, July 31, 2013

Flaring
Set fire to the gas; the fight to limit Bakken flaring

Rail
Not just shipping crude, but bringing drilling supplies to the shale-rail revolution
Tank cars, May 23, 2013
Bakken shippers switching back to pipeline, May 29, 2013

Refining
The "crack spread" -- is the US refining party over?


Enbridge Energy Partners said it may be forced to shut down an 80,000 bopd oil-loading rail terminal in North Dakota unless the amount of potentially deadly hydrogen sulfide in crude oil delivered to the facility can be reduced.

Last week, Enbridge asked for a ruling in one day from the US Federal Energy Regulatory Commission (FERC) to restrict the amount of hydrogen sulfide in the delivered crude. That request came after a very large concentration of the gas was discovered in a tank at Berthold, North Dakota, on May 5. 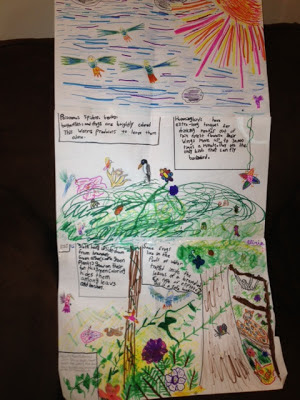 Click on photo will open photo in a new window.
Posted by Bruce Oksol at 7:20 AM 2 comments:

What The Well-Dressed Fracker Is Wearing -- WSJ


Retailers including Inc. and clothing manufacturers like Carhartt Inc. say they are seeing an increased demand for sturdy shoes and fire-resistant clothing that oil and gas workers can wear to protect themselves from fires and explosions.

The appetite for fracking gear is leading clothes makers to send research and development teams to consult with oil-field workers in Texas and North Dakota, in the same way Nike Inc. taps elite athletes to test out its track shoes and football cleats.

VF Corp., the maker of Timberland boots, Wrangler jeans and North Face jackets, says it is pulling research teams from malls and placing them alongside workers in muddy oil fields. Their task: Figuring out how to turn the historically firefighter-like gear into lighter, more breathable clothing.


The U.S. military has also played a role in the safe-clothing expansion by pushing U.S. textile mills to create flame-resistant fabrics cool enough that soldiers can wear them in war zones in Iraq and Afghanistan. In turn, the textile mills plunged the research and technology into fabrics they make for frackwear manufacturers.

When I was up there -- a long time ago, now -- it was Carhartt at Home of Economy. I can't imagine anything other than Carhartt for cold North Dakota winters.

Posted by Bruce Oksol at 6:21 AM No comments:

One thing you can say about the president: when public opinion polls demand it, he can act fast. In light of the IRS "outrageous" (the president's words) activity of the IRS, he accepted the resignation of the outgoing interim IRS chief. The interim chief was due to depart in June anyway.

RBN Energy: review of condensates, and how they differ from region to region

Companies' pursuit of "big data"—collecting and crunching ever larger amounts of information—is often thought of as another way to figure out exactly what customers want. But big data is also a means of measuring millions of little things in factories, such as how many times each screw is turned.

That is what Raytheon Co. is doing at a new missile plant in Huntsville, Ala. If a screw is supposed to be turned 13 times after it is inserted but is instead turned only 12 times, an error message flashes and production of the missile or component halts, says Randy Stevenson, a missile-systems executive at Raytheon. Improvising with a defective screw or the wrong size screw isn't an option, he says. "It's either right or it's not right."

Deming is probably turning in his grave; he was doing this in Japan after WWII. Jack Welch six sigma over at GE has probably been doing this for awhile also.