May 6, 2013: In addition to this TransCanada Heartland Pipeline from Hardisty, Alberta, "back" to Edmonton, TransCanada has another oil pipeline in the works. This one makes sense. This is a 300-mile crude oil pipeline to bring heavy oil from the producing area in the Fort McMurray, Alberta, area, south to Edmonton. This is their Grand Rapids Pipeline project and was announced last year (2012).

The more I look at the Canadian problem of getting its heavy oil out of Alberta , the more I think Canada is going to have to solve their problem internally, and forget about relying on the US to help them out, at least under the current administration.

We'll know more when the decision is made regarding the Keystone XL. If that is project is killed by President Obama it puts other pipeline expansion projects in jeopardy. Bloomberg News in The Financial Post this past week reports that even pipeline expansions and natural gas-to-crude-oil-pipeline conversions are at risk in the United States.


Enbridge Inc.’s request for a permit to boost the volume of oil on an existing pipeline from Alberta to Wisconsin has so far escaped controversy.

That may change as the State Department begins to review the plan, which would almost double the line’s capacity to 880,000 barrels a day — more than the proposed capacity of Keystone.

“We’re very concerned this has flown under the public’s radar,” said Peter LaFontaine, an energy policy advocate for the National Wildlife Federation, which is fighting both projects. “The public doesn’t seem to have the same sort of attention for pipeline expansions as they do for pipeline construction. But we’re talking about a lot of crude.”

Pipeline companies are proposing new ways to export oil from Canada to the south, east and west as rising production overwhelms existing lines and depresses prices. Output from Canada’s oil sands will more than double by 2021 to 3.38 million barrels a day, according to the Canadian Association of Petroleum Producers.

The article goes on to say that John Kerry will have the first "cut" at the request, and most of us know how he feels about Big Oil:


In March, the State Department asked for public comment about what it should consider as it updates a 2009 environmental impact statement for the U.S. permit granted to Enbridge’s original pipeline, known as the Alberta Clipper or Line 67.

The Calgary-based company, Canada’s largest transporter of crude oil, is seeking permission to double the flow through the line that starts in Hardisty, Alberta, and ends at a terminal in Superior, Wisconsin. From there, the oil is shipped to U.S. Midwestern and Gulf Coast markets by other pipelines.

The State Department is accepting comments until May 13. It must complete its environment assessment before it can consider whether the project is in U.S. national interest. The department has jurisdiction over Keystone and the Alberta Clipper because they cross the international border with Canada.

“We will continue to review Enbridge’s application in a rigorous, transparent and efficient manner,” said Jane Gamble, a State Department spokeswoman.

It appears TransCanada and Enbridge are finally getting the message: the current US administration is anti-Big Oil and especially heavy oil, unless it comes from Venezuela.

TransCanada has recently announced a new pipeline project, the Heartland Pipeline. I think this shows how desperate things really are for the Canadians.

This is a $900 million project -- let's call it a billion-dollar project. What will TransCanada get for $1 billion? A 125-mile pipeline that simply moves their oil from terminals in Hardisty, Alberta, to an industrial area north of Edmonton, Alberta.

Hardisty, Alberta, is the jumping off point for Keystone and Keystone XL.

Shipping oil to Edmonton, Alberta, north of Calgary, and northwest of Hardisty, is taking oil in the wrong direction. It is moving oil farther "inland" if that's possible. It makes no sense. All it does is provide a place of for the Canadians to store all that oil they will be producing. Looking at the TransCanada pipeline system at the link, one notices that TransCanada has no crude oil pipelines leaving the Edmonton area.

TransCanada has a huge natural gas pipeline system in this area and at least two natural gas pipeline projects in the works to take natural gas to the western and northwestern coasts of Canada, the Coastal Gas Link Pipeline Project and the Mackenzie Gas Project, which I suppose could be converted to oil pipelines if necessary. Activist environmentalists in Canada might be successful stopping a crude oil pipeline paralleling the Coastal Gas Link which goes through the Canadian Rockies. A crude oil pipeline along the Mackenzie Gas pipeline would be incredibly expensive and would take several years to plan and build.

This is a fascinating story to watch unfold. I think the Canadian government, TransCanada, and Enbridge, are putting their best faces on this, but the more one looks at this developing debacle the more distressing it appears.

Spending $1 billion to simply build a 125-mile pipeline to store Canadian crude oil in an industrial area north of Edmonton seems to underscore how desperate things have gotten.
Posted by Bruce Oksol at 10:25 PM No comments:

EOG's Liberty Wells In Parshall, Van Hook Have Been Updated

Cumulative production numbers have been updated for EOG Liberty wells in Van Hook and Parshall oil fields. For quite some time, there were no rigs operating in the Parshall, but now there are three or four in the Parshall. The Van Hook always remains active.

I was surprised to see the size of the spacing units in the Parshall. I assumed they were all 640-acre spacing; there are some 320-acre spacing wells.
Posted by Bruce Oksol at 8:40 PM No comments:

I never get tired of looking at the NDIC GIS map server. For example, three Fidelity wells on 640-acre spacing: 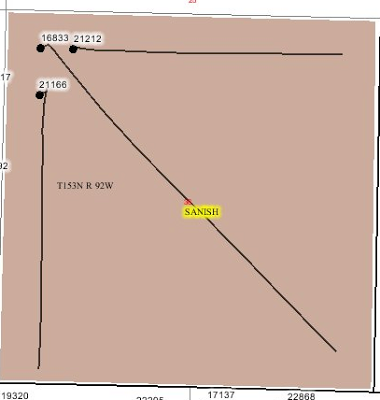 This one caught my eye because my hunch is we will start seeing more multiple wells on one-section spacing. There are plans to put at least 6 wells on some 640-acre spacing units in the better Bakken. In the May docket later this month there will be a request to place 8 wells in one section (640 acres), effectively about 80 acre-spacing, I suppose.

At one time, a lot was made about the direction that horizontals would be drilled. As can be seen here, that may not be all that important. One can also see the significant difference in lengths of the various horizontals and the setbacks from the section lines which explains why 1280-, and 2560-acre spacing would eliminate some of this waste.
Looking at the three horizontal wells on this one section, can you imagine 8 horizontals? Obviously they will be in at least two, if not three formations (middle Bakken, TF1, and, maybe TF2).

Snow In Arkansas In The Month Of May: First Time Since Written Weather History Began In Arkansas


For the first time since written weather history began in Arkansas (1819), snow has fallen in the month of May. This snow has set records for the latest snowfall and latest measurable snowfall in the state.

Email ThisBlogThis!Share to TwitterShare to FacebookShare to Pinterest
Labels: GlobalWarming_2012_2013

The Benghazi Debacle Gets Curiouser and Curiouser -- StateDept Hands Caught In The Cookie Jar -- But That Was A Long Time Ago -- Art Carney, WH Press Secretary; Hillary Missed The 3:00 A.M. Telephone Call


As intelligence officials pieced together the puzzle of events unfolding in Libya, they concluded even before the assaults had ended that al Qaeda-linked terrorists were involved.

Senior administration officials, however, sought to obscure the emerging picture and downplay the significance of attacks that killed a U.S. ambassador and three other Americans. The frantic process that produced the changes to the talking points took place over a 24-hour period just one day before Susan Rice, U.S. ambassador to the United Nations, made her now-famous appearances on the Sunday television talk shows.

The discussions involved senior officials from the State Department, the National Security Council, the CIA, the Office of the Director of National Intelligence, and the White House.

It looks like Hillary missed that 3:00 a.m. telephone call but was up 6:00 a.m. to start spinning the story. What a patriot.
Posted by Bruce Oksol at 3:13 PM No comments:

1. US imports of crude oil from Saudi Arabia:

2. The Wayzetta wells in Parshall oil field have been updated.
Posted by Bruce Oksol at 12:02 PM No comments:

Hitting Some Nice Bakken Wells in Eastern Montana; Montana Appears To Be Hitting Its Stride

It looks like Montana is hitting its stride, maybe returning to its glory days of 2000 when the Bakken boom started in that state.

The Fairfield Sun-Times is reporting some nice completions. I assume the newspaper does not have the staff to publish the data in reader-friendly style. I'm impressed they take the time to publish it in the first place, but I assume they take it directly from the state mineral agency. What a monumental pain to read. I'm not going to even attempt summarizing it. It just goes to show how really superb the NDIC is, providing information to the public. Everything that comes from the NDIC is quality work. I am really, really impressed. (Again, huge "thanks" to the Fairfield Sun-Times for publishing this information.)

But I digress. Just some quick notes from the Montana side of the line:

Although it's hard to say for sure, it sounds like EOG completed two Bakken wells in Roosevelt County, with IPs of 480 and 840. Based on total depth, these are probably long laterals.

Statoil reports a completed well in Richland County with an IP of 2,038, total depth of 20,048, suggesting a long lateral.

A big "thank you" to Don for sending the link.
Posted by Bruce Oksol at 10:05 AM No comments:

The 4th Annual Bakken Infrastructure Finance and Development Conference will be in Bismarck this year, September 9 - 12, 2013.

It was in Denver last year.

This link has been posted at the sidebar at the right, under "Conferences."
Posted by Bruce Oksol at 8:44 AM No comments: