Link here to The Moscow Times.


The heaviest snowfall in a century brought Moscow and the surrounding region to a near standstill and left hundreds of people without power, officials said Tuesday.

And with snowfall set to continue at least until the end of the week, the authorities are bracing for more chaos on the roads.

"There hasn't been such a winter in 100 years," Pyotr Biryukov, deputy mayor for residential issues, said Tuesday in comments carried by Interfax. "The snow this year has already reached one and a half times the climatic norm," he said.


Global warming, the heating of the atmosphere by increased amounts of industrial gases, is now accepted as a reality by the international community. Average temperatures in Britain were nearly 0.6°C higher in the Nineties than in 1960-90, and it is estimated that they will increase by 0.2C every decade over the coming century. Eight of the 10 hottest years on record occurred in the Nineties.

However, the warming is so far manifesting itself more in winters which are less cold than in much hotter summers. According to Dr David Viner, a senior research scientist at the climatic research unit (CRU) of the University of East Anglia, within a few years winter snowfall will become “a very rare and exciting event."

“Children just aren’t going to know what snow is,” he said.

Book a flight to Moscow.

Posted by Bruce Oksol at 9:03 PM 2 comments: Links to this post

Email ThisBlogThis!Share to TwitterShare to FacebookShare to Pinterest
Labels: GlobalWarming_2012_2013

Earlier this evening, "anon 1" sent a link, through a comment, to archived IPAA presentations. The number of presentations is, of course, overwhelming, but "anon 1" made it easier by suggesting to start with a certain presentation: Karen Harbert's, which is in the group of January 21, 2013, presentations.

Every slide is a "keeper" but this one certainly caught my eye: 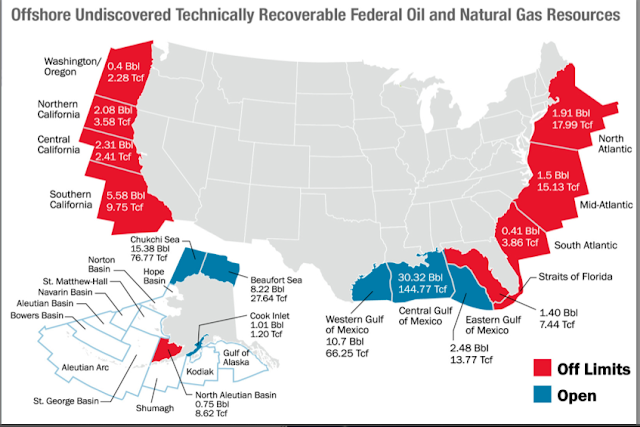 There are an endless number of story lines, just from this one slide.

One could easily come up with a "negative" story line.

On the other hand, this is a "positive" story line: America's century of energy is just beginning.

At the presentation, there's a similar slide with all the on-shore/continental shale plays in North America (minus a few new ones).
Posted by Bruce Oksol at 8:54 PM 3 comments: Links to this post

The Grail field, or as I like to call it, the "Helis Grail," has been updated.
Posted by Bruce Oksol at 6:37 PM No comments: Links to this post

Posted by Bruce Oksol at 5:42 PM 4 comments: Links to this post

At my "Data Links" page I have a number of links to prices for various domestic crude oils.

Today, I have added another link: the spot price for California oil: Buena Vista Hills and Midway Sunset. California crude oil is priced at a $10+ premium to WTI. Looking at the prices today, they are quite remarkable, at least compared to the Bakken: Chevron crude oil marketing.
Posted by Bruce Oksol at 4:24 PM 2 comments: Links to this post

The story line is obviously important:


Emerald Oil, Inc., based in Denver, Colorado, this week announced the company had signed a definitive letter of agreement with White Deer Energy, a private energy equity firm with offices in Houston and New York. Emerald will issue and sell $50 million of Perpetual Preferred Stock to White Deer.

But for me the data points regarding Emerald Oil is more important:

In Hill, Chouteau, Blaine and Fergus Counties in Montana, Emerald has 74,700 net acres in the “Tiger Ridge” area, which has been in production since the 1960’s.

Posted by Bruce Oksol at 3:28 PM No comments: Links to this post

Another Crude-by-Rail Terminal in Louisiana

Two announcements in this story: a) a new pipeline; and, b) a new crude-by-rail terminal:


The company also plans to build a crude oil unit train terminal at the Baton Rouge Maryland site. At Port Hudson, Genesis will build 200,000 bbl of storage, complementing its 216,000 bbl of existing capacity, and improve its barge dock and truck station.

Another indication that CBR is here to stay for quite some time.
Posted by Bruce Oksol at 3:24 PM No comments: Links to this post

Email ThisBlogThis!Share to TwitterShare to FacebookShare to Pinterest
Labels: CBR

Disclaimer: this is not an investment site. Do not make any investment decisions based on what you read at this blog.

I am posting the link to this story because several companies on the list are familiar to those following the blog and the Bakken.

Posted by Bruce Oksol at 12:12 PM No comments: Links to this post

Two Stories on Wind: Nothing To Do With The Bakken; Maryland Wind; North Dakota Taxpayers Will Help Pay for Massachusetts Off-Shore Wind Farm

February 11, 2013: even the Washington Post can see through this scam. But, remember, Maryland was also the state that was going to mandate that rats could not be killed; they had to be "humanely caught," and relocated. And relocated not just anywhere but back "within their own families." I can't make this stuff up.

A reader sent this link -- a number of interesting story lines:


After years of trying, Maryland Gov. Martin O’Malley is poised to win approval from state lawmakers in the coming weeks for a field of towering windmills in the Atlantic Ocean.

But the tortured process of garnering support has left O’Malley (D) with a project so small — one able to generate just half the energy of a single power plant — that developers and banks probably won’t take the financial risk, experts predict.

The reader noted these excerpts:


To win over others, he has limited the cost of the subsidy to about $1.50 a month per household. The subsidy will amount to $2.5 billion over 20 years.

In addition, to secure what might be crucial votes from a handful of African American lawmakers, the governor added millions in costs to help minority businesses gain a foothold in the industry.

Lawmakers also grew skeptical after learning that O’Malley’s former chief of staff was involved in one of eight bids to become the developer and get the subsidy.

In addition to this, something is also very interesting: look at the map at the link -- the "wind planning areas in the Atlantic ocean." It is noted that no wind farms have been built in any of these planning areas. To the best of my knowledge, this includes Cape Wind, off Nantucket, Massachusetts.

So, the update on Cape Wind:


The last-minute fiscal cliff agreement not only resolved the debate in Washington over tax rates, it also extended the nation’s wind energy tax credits for another year. The extension was a big break for Cape Wind, but not as big as you might think. With the blessing of state regulators, Cape Wind had already protected itself financially in case the credits were allowed to lapse.

The fine print of the power purchase contracts Cape Wind negotiated with National Grid and NStar guarantees the Nantucket Sound wind farm a base rate for its electricity if it qualifies for the tax credits and higher, compensatory rates if it does not.

Now, with Congress extending the wind tax credits and Cape Wind likely to qualify for them this year, the higher electricity rates will probably be avoided. In other words, federal taxpayers will pick up a significant chunk of the cost of Cape Wind instead of Massachusetts utility customers.

Deeper into the article:


What Rodgers didn’t mention in his statement was that Cape Wind had already partially insulated itself from any Washington inaction on the wind credits.

In other words, the price of Cape Wind power would go up 25 percent if the wind farm failed to qualify for the tax credits. In testimony before state regulators, utility officials said the price increases would offset only about half of Cape Wind’s revenue loss from a failure to secure a federal tax credit.

Cape Wind is expected to begin construction this year.

For archival purposes; not relevant to the Bakken, but helps put things into perspective.
Posted by Bruce Oksol at 12:04 PM 2 comments: Links to this post


Sinochem Petroleum USA LLC, a subsidiary of China’s Sinochem Group, plans to pay $1.7 billion to acquire 40% of Pioneer Natural Resources Co.’s stake in 207,000 net acres in the Wolfcamp shale in the Spraberry trend of West Texas.

At closing, Sinochem will pay $500 million in cash to PNR, before normal closing adjustments, and will pay the remaining $1.2 billion by carrying a portion of Pioneer’s share of future drilling costs.

Sinochem and PNR plan to drill 86 horizontal Wolfcamp shale wells during 2013, 120 wells in 2014, and 165 wells in 2015. The transaction is expected to close during the second quarter, subject to customary governmental approvals.

Previously reported.
Posted by Bruce Oksol at 11:25 AM No comments: Links to this post


U.S. Sen. John Hoeven (R-ND) announced Monday that United Airlines will begin offering twice-daily nonstop service from TRRA to Denver on June 6. The airline will use 50-seat United Express regional jet planes, a step up from the smaller aircraft used by Great Lakes Airlines for its routes to and from the same two cities.

The newspaper also reports construction on a bypass around Dickinson could begin as early as this summer:


Construction for a bypass around Dickinson may begin as soon as this summer, drawing travelers wishing to move from Interstate 94 to Highway 22 north away from the city and Third Avenue West.


1) currently there is no connection between 116th Avenue and the interstate, suggesting a cloverleaf off the interstate will have to be built
2) further south on 116th Avenue, south of the interstate, northwest of the lake, is a large circular railroad track -- crude-by-rail loading terminal -- just a bit to the southeast of this "116th Ave SW & 37th St SW, Dickinson North, Stark, North Dakota 58601" on google maps
3) and, the reader thought he had recalled that it was the land directly west of this CBR facility where the MDU-Calumet diesel refinery is to be built

This story provides the general location for the new MDU-Calumet diesel refinery:


MDU and Calumet Specialty Products Partners of Indianapolis have scouted a 200-acre plot of land about five miles southwest of Dickinson on 116th Avenue Southwest.

Posted by Bruce Oksol at 8:13 AM 5 comments: Links to this post

Wells coming off the confidential list today have been posted; not particularly remarkable.

Carpe Diem: Energy Sector's Job Creation -- Staggering; The comments suggest that some people still don't get it; they're missing a lot of opportunities.

The story of Richard III's bones has become quite a big deal. Years ago I was in my Shakespeare and English history phase. I was thrilled when Brenda James told me the real story of William Shakespeare. The front page of today's WSJ has three photos related to the bones, and the story is on page A10.


This is the memo sent to union members in Michigan: "Members who indicate they wish to resign in March, or whenever, will be told they can do so in August. We will use any legal means at our disposal to collect the dues owed under signed membership forms from any members who withhold dues prior to terminating their membership in August for the following fiscal year." Wow. Speaking of Richard III's bones above, maybe this will spur new interest in looking for Jimmy's bones.

ATT data usage surges during Super Bowl: quite incredible, the stats
Posted by Bruce Oksol at 8:12 AM No comments: Links to this post