Power Africa For $6.5 Billion And Fund The White House Tours For 100 Years With $500 Million

What's the quickest way to get electricity to Africa? Think about that for a bit. I have to get some coffee, do some administrative stuff. After that I will get back to the answer. It's a serious post, and something y'all should enjoy.

Last week I posted this:

It turns out that $100 million figure was hugely under-estimated.

The cost of the trip just went up another $7 billion to Power Africa. Ka-ching. And the president's trip is just beginning.

I've long given up worrying about the US deficit and spending. No matter how broke we are, we can always find money to give to Palestine and Africa.

As noted above, funding White House tours cost about $75,000/week.

I used $100,000/week (instead of the stated cost of $75,000/week) to provide free lunches and maybe even ObamaPhones for those who take the White House tours. As inflation increases the cost of the tours, we could cut back on ObamaPhones and then the box lunches.

Our six-year-old granddaughter's still life drawing (she will soon be seven): 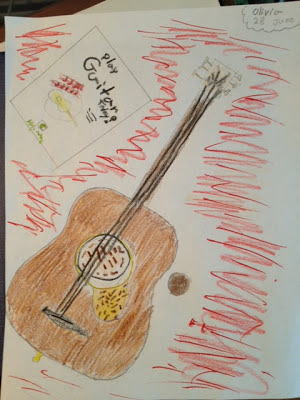 Email ThisBlogThis!Share to TwitterShare to FacebookShare to Pinterest
Labels: ObamaSequester