If federal government stopped all crop subsidies, it would result in a savings of $6 billion/year.

Call me naive, but crop subsidies don't seem to be the problem.

Wow, if this is accurate, this is quite amazing. I had missed it. A reader from Denmark led me to it:
Others in Long Creek:
This is a very small field, only 18 sections, east of Williston, north of the river, squeezed in between two other great fields, the Stockyard Creek oil field and the Truax oil field. For such a small field, it is very active. One other well there is on confidential list, and there are two rigs operating: both operated by CLR.

Has anyone noticed? The price of natural gas has quietly melted above $3.38? I had not noticed; that is quite interesting. I assume it is mostly seasonal as we move into autumn and then winter. 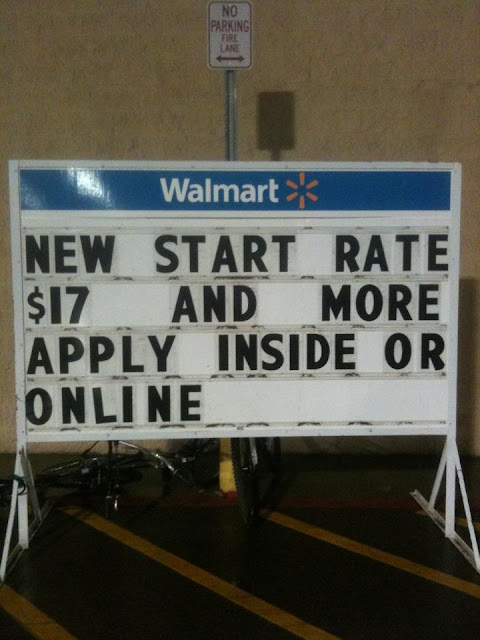 The Heart of the Bakken, Williston Wal-Mart, September, 2012
Huge thank you to the reader for sending me this.

Twenty-four (24) wells come off the confidential list from the weekend and Monday:

I have to chuckle. I didn't see much football Sunday, but the little I did see suggests there were a few occasions in which some teams wished the substitute referees were still on the field. Some of the "non-calls" had a significant impact. But we probably won't hear much about that, after all the grief everyone gave the substitute refs.
Posted by Bruce Oksol at 9:27 PM 1 comment:

For Investors Only: Warren Buffett Increases His Energy Holdings

If I ever run out of things to do, or if the Bakken is shut down for any reason, I think a blog devoted to Berkshire Hathaway would be very, very interesting.

Moments ago, Don sent me a link to a story in which, through a subsidiary, Berkshire Hathaway will be buying two California wind farms.


MidAmerican Energy has agreed to buy two wind projects under construction about 120 miles north of Los Angeles from the wind developer Terra-Gen Power. Terms of the sale were not disclosed.

The two projects, totaling 300 megawatts of peak electric capacity, will be part of the larger Alta Wind Energy Center located in Tehachapi, Calif., much of which is already in operation.

For me, the only interesting thing about the article is the fact that it reminds me how much I forget about Warren Buffett and Berkshire Hathaway.

According to wiki, MidAmerican Energy Holdings Company is a holding company controlled by Berskshire Hathaway.

In turn, MidAmerican Energy "holds" the following companies:
The Kern River Pipeline is a 1,679-mile natural gas pipeline that begins in southwestern Wyoming and ends near Bakersfield, CA, supplying customers along the way: Utah, Nevada, and California.

MidAmerican announced a new division, a "renewables" division in January, 2012 -- earlier this year:


MidAmerican Energy Holdings advised that its new division, MidAmerican Renewables, had been established to expand the company’s presence in the wind, geothermal, solar and hydro projects for the renewables market. The new division will be based in Des Moines, Iowa and will consist of MidAmerican Wind, MidAmerican Geothermal, MidAmerican Solar, MidAmerican Hydro and project development and commercial management.

There are multiple links to stories on the net of MidAmerican Renewables ramping up quickly in renewables.

For example: through MidAmerican, Warren Buffett is participating in building the world's largest solar  project, announced May 3, 2012, from offices in Des Moines:


This week, MidAmerican Solar and First Solar, Inc., marked the start of major construction at Topaz Solar Farms, located in San Luis Obispo County, Calif. The 550-megawatt photovoltaic project will employ approximately 400 workers during its three-year construction period; will generate nearly $417 million in local economic impact, the majority of which will be generated during construction; and will provide California with renewable electricity.

I never paid much attention to Berkshire Hathaway until it bought Burlington Northern Railroad just before the Bakken took off and unit trains became the "talk of the Bakken."

I have no idea where Microsoft, Google, or Apple will be fifty years from now, but something tells me Berkshire Hathaway will be around, and may be one of the largest energy companies in the world.

Disclaimer: this is not an investment site; make no investment decisions based on what you read at this site.
Posted by Bruce Oksol at 5:54 PM 2 comments:

Maugheri vs The Oil Drum: Cornucopians vs The Peak Oil Crowd


This is part II of a guest post by Jean Laherrère, long term contributor to The Oil Drum. Jean worked 37 years for TOTAL on exploration and production of oil and gas, and since his retirement has worked tirelessly to analyze the world's oil & gas data and developments.

I'm posting this mostly for my benefit to keep track of the argument.

I guess I'm somewhere between The Oil Drum peak oil and the Cornucopians: I agree that Saudi Arabia is unable to meet production expectations; I disagree with The Oil Drum: I think the Bakken will live up to its potential. But in the big scheme of things, the Bakken is not enough to make a difference globally.


Contrary to what most people believe, oil supply capacity is growing worldwide at such an unprecedented level that it might outpace consumption. This could lead to a glut of overproduction and a steep dip in oil prices.

And then, The Oil Drum:


The theme of these posts over the past eighteen months has been to look at the leading producer nations that provide crude oil to the world, and see whether it is realistic to anticipate significant increases in their production. Posts have now looked at North America, Russia, Saudi Arabia and China based on the original list of rankings produced by the EIA in 2009.

From a guest editorial at The Oil Drum following the Maugheri report.


Much as all the stakeholders in the energy industry would like to be optimistic, it isn't an oil glut by 2020 that is keeping oil prices as high as they are. It is the reality that the oil sector has been pushed to the limit of its capabilities and that this difficult challenge will dominate energy markets for the rest of the decade.

Saudi Arabia, from The Oil Drum:

At that last link, there was this comment posted:


In 2005 investment banker Mathew Simmons predicted that Saudi Arabia could not increase its oil production. Since then its output has risen from nine million barrels a day to 10 million. Meanwhile, a recent report by oil executive Leonardo Maugeri, which was published by Harvard University, provides compelling evidence that a new oil boom has begun. If, like me, you are confused I am not surprised. One thing seems clear: we are not likely to run short of oil any time soon and one piece of good news is that at least some of the soothsayers now appear willing to own up to their faults.

I could be wrong, but based on a recent comment from a reader and looking at recent articles from The Oil Drum it looks like the latter has moved its position slightly. At one time, The Oil Drum was synonymous with "peak oil." Now, it appears to me that The Oil Drum has moved the production curve to the right -- that there is such a thing as "peak oil," but the graph has moved to the right, and the rate of production will slow down (or already is slowing down) on a global scale, notwithstanding what is happening in North America (Bakken, Eagle Ford, Canadian oil sands).

The Oil Drum notes that one part of the argument has evolved. From US production AND Canadian production, it is now NORTH AMERICAN production.

The story behind this song is quite remarkable. It was a #1 UK hit in 1961. One can argue the cover by the Meteors is better.