"The Williston" will have a grand opening on September 7. Former Elks building. Boutique hotel, fine restaurant dining, and a bar.

Delta Air Lines, the only major carrier that owns its own refinery, is looking at buying Bakken oil because of its competitive price.

BNSF announcers it now has capacity to carry one (1) million barrels out of the Bakken. Keystone XL? Who needs the Keystone XL?

Reynolds Market will begin construction on a new 46,000 square-foot, state-of-the-art supermarket in April, 2013, in Sidney, Montana; the shopping center will be one of the largest in eastern Montana.

Several other human interest stories. No links provided; folks can subscribe to the Williston Wire.
Posted by Bruce Oksol at 8:35 PM No comments: Links to this post

What They Will Be Talking About Friday Morning; TRANSCRIPT -- KOG at Barclay's; TPLM Earnings Transcript

As usual, Peggy Noonan has it exactly right: soft extremism at the convention.


"If you look at just buying one gallon of gas, it really doesn't hurt us at all, but the problem is a lot of US consumers are buying multiple gallons of gas every single day." -- analyst, August 30, 2012.

I assume this analyst does not own a car, but buys gasoline in one-gallon plastic containers for his Briggs and Stratton lawn mower.

From the WSJ today: the shale revolution -- what could go wrong? -- lots of quotes from the "hofmeister." The whole article may be there; or  you may need a subscription (sometimes these links seem to change on me.)


Eleven (11) new permits were issued Thursday:
The Whiting permit is for another Pronghorn Sand(s) well.

In addition, one producing well was completed:


*******************************
I assume the pullback in the price of oil today was due to the inevitable Euro-zone recession, coming sooner than later. I haven't watched CNBC since early August so I don't know what the talking heads were saying about the volatility in oil price today.

Bullish on CVX -- SeekingAlpha. Talk of CHK or Hess as possible acquisitions by CVX.

Data points from the KOG presentation at Barclays.


More at the link above.
Posted by Bruce Oksol at 8:00 PM 4 comments: Links to this post

Photos of the Epping Crude-By-Rail Facility


I think one of the most encouraging things here is what we've seen build out in the rail. So I think there is five or six facilities today, most of these are moving anywhere from 60,000 to 90,000 a day of production. The most recent one, that's closest to our Polar block that we just talked about, is the Epping facility. Noted that they finally delivered their first production to the Anacortes Facility out in Seattle. That was the first outlet to the west coast there. So I think that's really encouraging that the oil started to move by rail there. They get their unloading facility built. These are all positives and this really feeds into the differentials that we've all talked about.

Now, look at the photos below.

[See first comment. I inadvertently put the wrong name of this facility in the original post. It's been corrected due to acute observation of a reader; much appreciated.]

A reader sent me a "ton" of photos of the new Epping crude-by-rail facility. I have not gone through all the photos yet, and had planned to post them in some kind of order, but they are too good to wait. So, I will post one set now, and then go through the other two sets, and see how best to re-arrange and post photos.

Enjoy. More later on this subject. A "huge" thank you to the reader for sending me these photos. They really are incredible. 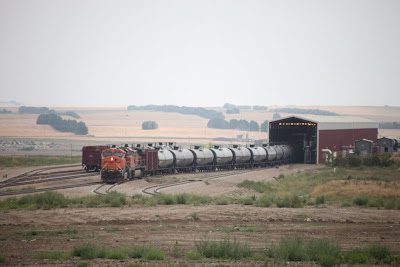 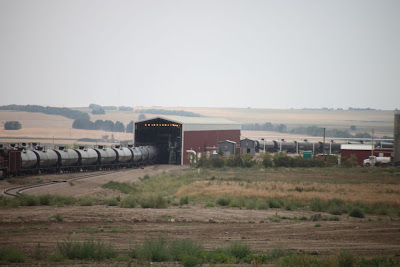 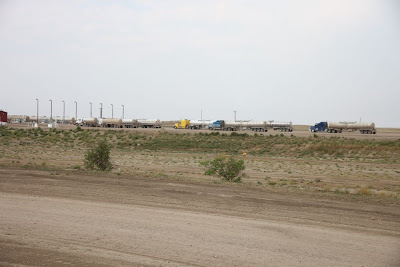 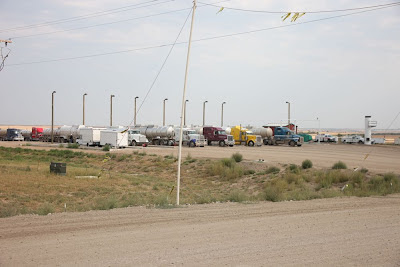 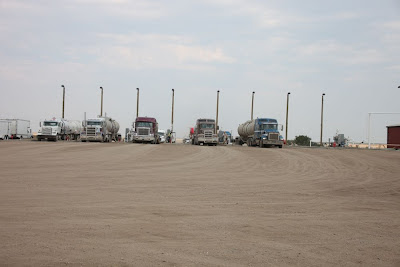 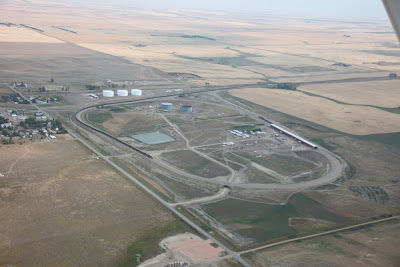 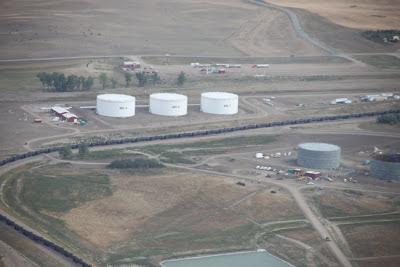 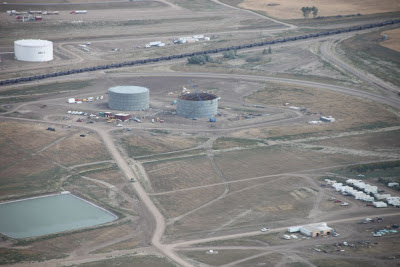 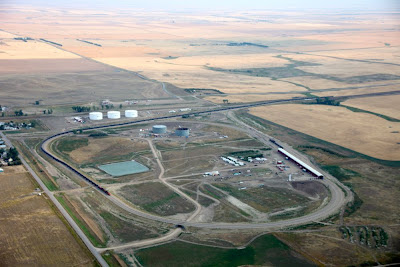 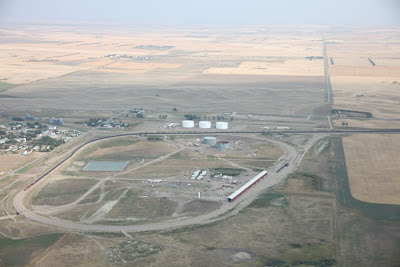 As you look at these photos, remember, this is a 24/7 operation (note the "stadium" lighting). Trucks are coming in/going out continuously. Think of 118-unit trains operating continuously from 16 CBR sites throughout the Bakken, with trucks coming in/going out 24/7, and then think of the carbon footprint of CBR operations, many of them needed because faux environmentalists won't allow pipelines to be laid. I'm thrilled so many truck drivers have jobs, when folks complain about all the trucks on the road, at least some of the "blame" can be placed on faux environmentalists.
Posted by Bruce Oksol at 2:42 PM 2 comments: Links to this post

Disclaimer: this is not an investment site. This is not a recommendation. In fact, a reader sent me the link as an informational item. Enjoy.


Triangle Petroleum (TPLM) completed the transition from non-operated Bakken wannabe player to operated and vertically integrated Bakken player on a growth path similar to household Williston Basin names Oasis and Kodiak with the release of today's 2Q13 results. The quarter beat analyst estimates (more on that in the table and notes below) but more importantly TPLM reiterated its long term focus on the North Dakota side of the play where they have proven, largely derisked acreage in both Williams and McKenzie Counties, North Dakota.

A reminder about Triangle:

It should be noted that TPLM has about 86,500 net acres in North Dakota and Montana, which is significantly more than the 27,600 net acres that QEP recently acquired for $1.38 billion, most of it from one operator. It's easy to do the math.

TPLM's market cap is about $300 million. Again, this is not an investment site. It is simply idle chatter among those interested in following the Bakken.
Posted by Bruce Oksol at 1:03 PM No comments: Links to this post

This article was published back in August 2010. I don't recall if I ever posted it. It will be posted now for archival purposes.


The rush to tap into these gas-rich formations is proving a bonanza for Tulsa, Okla.-based Helmerich & Payne, the dominant supplier of high-performance drilling rigs able to extract gas from the shale pockets. Last month, Helmerich & Payne announced plans to build 16 high-performance rigs, many under multiyear contracts commanding day rates in the mid-$20,000s to service the most promising oil and gas shale basins in the U.S. The latest orders bring the company's total to 19 rigs for this fiscal year, ending Sept. 30, 2010.

Again, note: this article is two years old. It is being placed here for archival purposes.
Posted by Bruce Oksol at 12:27 PM No comments: Links to this post

Email ThisBlogThis!Share to TwitterShare to FacebookShare to Pinterest
Labels: Cost

For Investors Only: Enbridge Continues To Raise Cash; Invest in Infrastructure

Disclaimer: this is not an investment site. No recommendations are being made. Just information from Yahoo!In Play. The link is dynamic.

Enbridge to invest up to $600 million to support gas distribution growth in Toronto Area (ENB): Co announced its Board of Directors has committed up to $600 million to expand Enbridge Gas Distribution's (EGD) natural gas distribution system in the Greater Toronto Area to meet the demands of growth in the GTA and continue the safe and reliable delivery of natural gas to current and future customers. The estimated capital cost is contingent on finalization of the scope of the project. The target for construction of the upgrade project is in 2014 and 2015. The project is subject to approval by the Ontario Energy Board.

Enbridge Energy priced an underwritten public offering of 14 million of its Class A Common Units at $28.64/unit (EEP) :
Posted by Bruce Oksol at 11:55 AM No comments: Links to this post

KOG has some great wells in this field.

For newbies, look at this well:


Note that this well has produced 111,000 bbls to date and has not yet reported an IP.

Also, if you go to the site, be sure to look at the Madison well that is still producing 800 bbls/month after 30 years of production.

By the way, KOG has another well on "drl" status that has produced more than 100,000 bbls to date:

Global Economy (Nothing About the Bakken); Sports

For the Bakken, scroll down.

I see that the GDP for the Euro-zone has contracted for two months of the last three. I forget the definition of a recession, but some years ago I was told that a recession was two consecutive quarters in which the GDP contracted. [Later: I see the AP is reporting the same thing:


Even growth in traditional economic powerhouse Germany is slowing, and the OECD's interim assessment said that Europe's largest economy could slip into recession by the end of the year.]

President Reagan probably understood the difference between a recession and a depression as well as anyone.

Not to worry; doesn't the third of four FedEx Championship golf tournaments start today? Speaking of which: great football game last night. I don't have any fond allegiance to the Cowboys, but it was interesting to note the story line written by / for the commentators last night and then see the game play out.
Posted by Bruce Oksol at 9:04 AM No comments: Links to this post

The AP says the four-week moving average, which the AP says is a better indicator of labor market trends, edged up to 371,250.

Happy days are here again. No need for QE3. The job market is improving -- lowest level of first time unemployment claims in a month. Just that inconvenient truth: the four-week trend edge up. Hmmm.

It's interesting to scroll through the updates.

I see that, because of the construction boom, there are not enough workers. (Note: there are two links there.)


Dykstra sees buyers taking advantage of low interest rates and low home prices. He is building about forty houses a month now, but says he would build sixty if he had enough labor and contractor support.


Posted by Bruce Oksol at 8:35 AM No comments: Links to this post