It's possible I posted this story earlier, but have forgotten, and easier to re-post than to look.

Bottom line: based on "per acre" value, Oasis and Whiting best values in the Bakken.


Buyers looking to extract the best deals from Bakken shale oil may turn to Oasis Petroleum Inc. and Whiting Petroleum Corp. as the cost to find and produce a barrel of crude soars.

Among the biggest U.S. explorers in the 200,000 square-mile (518,000 square-kilometer) geological formation centered in North Dakota, Oasis and Whiting owned the most Bakken shale acreage versus their takeover value, according to data compiled by Bloomberg. On that basis, both control more land than Brigham Exploration Co., which sold itself to Statoil ASA this week for more than $12,000 per Bakken acre in the most expensive major acquisition in the region, said Pritchard Capital Partners LLC.

This is not an investment site; see disclaimer at sidebar at the right. I accumulate shares in various companies in the Bakken, including Whiting, but not Oasis. I don't plan to buy any shares in any equity in the next month -- all my discretionary cash is going to my granddaughters, daughters, and wife (not necessarily in that order).
Posted by Bruce Oksol at 10:43 AM No comments:

As regular readers know, I have noted on numerous occasions, Whiting oil has a northern Bakken operation centered around New Town, North Dakota, in its Sanish oil field, just west of where the North Dakota Bakken first broke out, the Parshall oil field.

Tea leaves tell me that Bakken activity is moving to McKenzie County in 2012, with the center of activity at Watford City. I've heard through the grapevine -- or would it be through the hops pasture -- that Whiting will be building a headquarters office in Watford City.

By the way, on the way back from Watford City yesterday, I saw two large man-camps being built just west of the city, right on US Highway 85. It appears there will be two, one right next to each other, if I read the signs correctly. One will be a 400-bed camp.

Incidentally, it appears Power Fuels is fueling the growth in Watford.

I would love to know more about Power Fuels, just for archival purposes: when it was founded; how it has grown (pre-boom to current boom). If Harold Hamm is the face of the Bakken, one almost gets the feeling that Power Fuels has become the face of Watford City. Everything I see about them, everything I hear about them, impresses me. And I could be wrong, but it looks like they used to be called Badlands Power Fuels, and if true, tells me a lot about their heritage. [Update: I was sent this link which provides background to Power Fuels.]

Wow, talk about a disorganized post: I start out with an unconfirmed story about Whiting, touch briefly on man-camps outside of Watford City, and end up talking about Power Fuels.

So, I guess if I have digressed this much, I might as well post photos of the Power Fuels housing complex northwest of the center of Watford: 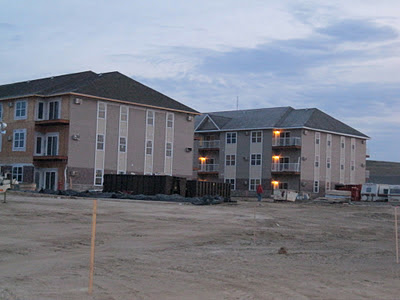 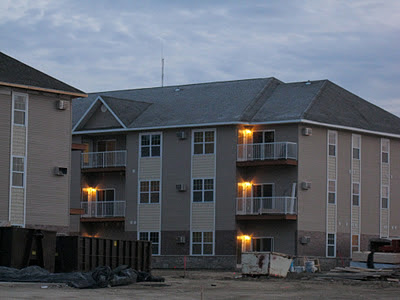 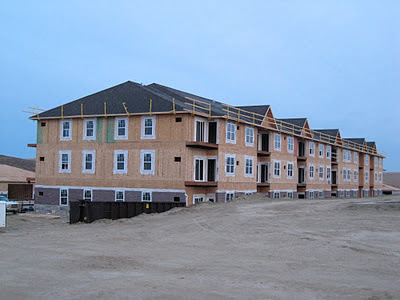 Pretty impressive, huh? Watford City. I am told this complex will accommodate over 1,000 people. The population of Watford City in the 2010 census was 1,744.

I apologize for the quality of the photos; they were taken early morning on Saturday, November 5, shortly after dawn. It is amazing how much better the photo is when taken with the dawn behind me.
Posted by Bruce Oksol at 10:15 AM No comments:


Started in 1979 by Jim and Jody Arthaud, Missouri Basin Well Service (MBI) has branched out from a single truck water transportation business in Belfield, N.D., to a huge oil industry business in five states, with offices in Belfield, Ross, and soon, Watford City.

According to Kummer, Missouri Basin Well Service plans to be in Watford City for a long time, which is why they are investing in a headquarters, not a branch.

“We are building an office and shop to service our equipment,” states Kummer. “Construction of the new office is currently underway and we are hiring for all positions.”

And Chuck Steffan, chief operating officer for MBI, echoes further, “We will be doing all our data processing, processing tickets, and coordinating activities for our McKenzie County business at the Watford City headquarters.”

Because Missouri Basin Well Service plans on staying in Watford City, it will also be building apartment complexes to house their employees.

No place in the Bakken, not even Minot, will surpass the industrial base in Williston -- at least not in the foreseeable future, but the tea leaves suggest Watford City is going to be the center of activity in 2012. In addition to everything else, the community seems poised, ready, excited, and eager to expand. There seems to be a lot of community spirit in Watford.
Posted by Bruce Oksol at 9:59 AM No comments:

Email ThisBlogThis!Share to TwitterShare to FacebookShare to Pinterest
Labels: WatfordCity

Undated: Alaska Monthly -- Cruz Construction -- Yes, A Bust In the Bakken is Not Unthinkable -- The Bakken, North Dakota, USA

October 6, 2012: a human interest story on Cruz Construction in The Dickinson Press/Inside Climate News. Remember: this is the guy from Alaska who returned to North Dakota and noted:


“Thousands of more [Alaska] jobs are at risk,” Cruz said. “My own company is a microcosm of what’s happening throughout Alaska’s oil industry now and what will happen throughout Alaska’s economy soon if we continue to drive away investments with unfriendly taxes and regulations. Three years ago, we were flying high and employed 200 Alaskans through the exploration season. Then came the ACES oil tax, and it was like someone turned off the faucet.”

Something for NoDaks to think about.

You may want to check out Cruz Construction website first.

From the article linked above:


Dave Cruz’s Alaska roots run deep. His first job was working on the trans-Alaska pipeline and he built a successful business servicing the North Slope. Now, Cruz’s family may have to uproot for new lands.

“We have to follow the work, so we made the choice to move our oilfield support to North Dakota,” Cruz says. “North Dakota has a more favorable tax environment, they are more pro-business and they have a how-can-I-help-you attitude instead of what’s-in-it-for-us attitude.”

“In 2007 through ’08, we were able to employ a couple hundred people all winter,” Cruz says. “Now we’re able to employ a dozen. We had Anadarko, Chevron, FEX, Brooks Range, ConocoPhillips, Pioneer that were exploring on the North Slope. Today, we have only one exploration well that’s going to happen – and that will be done in March of this year.”

Cruz is now one of the thousands of Alaskans supporting Gov. Sean Parnell and his call to restructure ACES, which was enacted in 2007 under then-Gov. Sarah Palin. It raised the oil production tax base rate to 25 percent, applied against the production tax value. It also set a progressivity rate of 0.4 percent, significantly boosting taxes, particularly when oil prices are high. And, under ACES, as oil prices increase, the marginal tax rates can climb to more than 80 percent.

Later in the article:

Last year, Alaska’s most active explorer, ConocoPhillips, did not drill an exploration well for the first time in 45 years, and it says it has no plans to drill a well in 2011. In fact, while more than 900 exploration wells were drilled across the United States last year, only one was drilled on the North Slope. This winter, only a lone exploration well is planned.

“Thousands of more jobs are at risk,” Cruz said. “My own company is a microcosm of what’s happening throughout Alaska’s oil industry now and what will happen throughout Alaska’s economy soon if we continue to drive away investments with unfriendly taxes and regulations. Three years ago, we were flying high and employed 200 Alaskans through the exploration season. Then came the ACES oil tax, and it was like someone turned off the faucet.”

That trickle is also being felt in the trans-Alaska oil pipeline. At about 600,000 barrels per day, the pipeline is two-thirds empty, and in 2010, it declined by about 7 percent. It’s a scenario that has industry insiders pondering the question: How low can it go? At some point it will simply become too expensive for producers to continue to pump oil through the pipeline or technical issues will force its closure. Some fear that day could come five to 10 years from now.

“When that happens, Alaska is in for a rude awakening,” Hamilton said. “No flow means no dough. And, when the oil industry isn’t paying the bills, guess where the government will come looking. But even if we implemented a statewide income tax and abolished the Permanent Fund dividend, it wouldn’t come close to making up what the oil industry pays to state government.”

BEXP sold out to Statoil, partly because of the huge up-front cost of drilling for oil. Taxes are not an inconsequential part of the cost of oil production. So, for those folks asking whether the Bakken could experience a bust sooner than later: yup.
Posted by Bruce Oksol at 9:47 AM No comments:

Last week Petro-Hunt was granted permits for six wells that will end up being a small cluster, almost all on the same pad:
By the way, there are also two producing long laterals in the section just next to these six wells, with a third confidential next to these two:
Whiting/KOG has a fair bit of acreage in this area. Just saying. 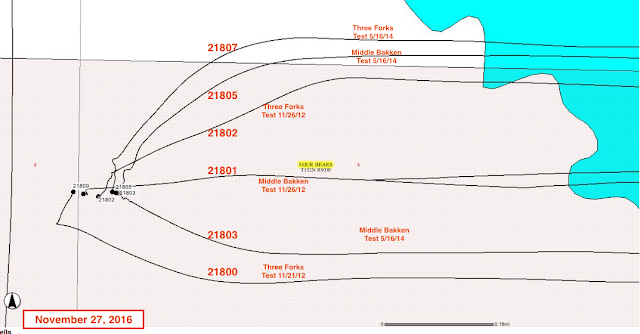 Let's see the production profile of the three wells fracked in 2012 during the period when the 2014 wells were fracked:

First, #21802, Three Forks well, production increased nicely for a few months after neighboring wells fracked, but then back to usual Bakken decline: