An Incredible Day in the Bakken -- Random Photo of the Lloyd Wells -- Bakken, North Dakota, USA

I was asked to run an errand today, nothing to do with the oil industry, but it gave me the excuse to take the car for a drive and be reimbursed for the gasoline.  (I do not drive unless someone tasks me to drive; I will not add to my carbon footprint unnecessarily.)

I was up at 4:30 a.m., did some preliminary paperwork between 5:00 and 6:00 and was on the road by 6:05. I had to wait until 6:00 make sure Herman Oil was open to fill up with gasoline (free coffee). I learned I could have left a half-hour earlier; Herman Oil on the bypass is open at 5:30 Monday through Saturday, I think she said; later opening on Sunday.

Then south to the bull's eye of the Bakken: northeastern McKenzie County. I did not realize that the sun would not be up until about 8:00. Actually 8:44.

Wow, what a great drive. Absolutely pitch dark, but a long line of truck lights between here and Watford City, and simply the best country music on the radio.

This was the song that stuck with me throughout much of the drive:


<Not as Good As I Once Was, Toby Keith

Yup, not as good as I once was.

It seems the truck traffic never ceases to amaze me. The intersection east of Watford City where 1608 turns north was incredibly busy.

I got up to where the Tarpon Federal well was but it was too dark to take any pictures. Actually, I took the photos of the flares, but it looks like just like a huge hot sun in the middle of the night. Not even worth posting, although ...

This was up north of Arnegard. At daybreak a random photo of a two-well pad:  the Lloyd 34-3 2 well and the Bugs 27-22 1H well, both BEXP wells; rig on Bugs, I believe, the Lloyd well confidential ... 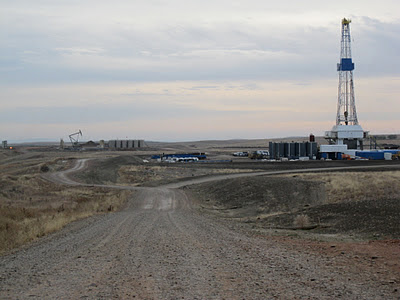 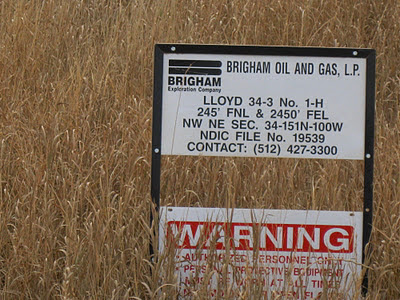 Off in the distance,  is:

******************
On another note: I have always tried to respond to every comment that was sent into me. But the comments have become overwhelming in number. I apologize, but I can no longer respond to every comment. I will respond to some, and others will be turned into stand-along posts, as I have done in the past, if they are particularly noteworthy. Please continue to send in comments; don't be upset if I don't answer your comment. If doesn't mean I don't like you; it's just gotten way too busy.
Posted by Bruce Oksol at 5:14 PM No comments: Links to this post


Carlson said CNN reporters did a ride-along with the department recently and other national news organizations have descended upon the town. He said producers of the Discovery Channel’s “Ice Road Truckers” reality show plan to soon come and follow Williston police officers for a new television series.

They won't have to wait long. The forecast is for a winter storm this weekend.
Posted by Bruce Oksol at 4:13 PM No comments: Links to this post

This came in through the comment section at a different post, but knowing a lot folks may not read the comments, it's posted again here:


If any of you know of someone needing to add equipment to keep up with the busy schedules I can help! My name is Lynn Weaver, I work for Rush Peterbilt in Dallas and we provide many of the top 10 companies with trucks - Schlumberger, Baker Hughes,Key Energy Services and Select. We can rig units as needed.

Re-posted as it was sent to me. Not a paid advertisement. No endorsement from me. Simply passing on information that might be useful to folks.

Good luck to all.
Posted by Bruce Oksol at 11:59 AM No comments: Links to this post